On Sunday 26th September we played the second scenario of the Crete campaign called Galatas Village. I have changed the previous post and now this includes the full battle report. 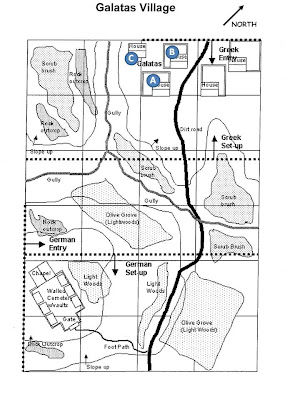 The bottom end of the map links with the previous battle and you can easily recognise the cementery of the bloody encounter between the German paratroops and the Greek soldiers. The landscape is therefore not too different to the previous game, the slope of a hill ascending northwards, covered with rock outcrops, scrub brush, etc. The photograph below shows the table (6" x 4") looking from the German side  (south to north) 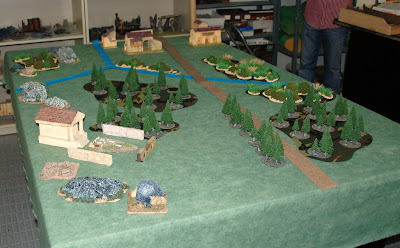 Now the table from the Greek side (north to south)﻿. The blue lines represent the dry river bed. 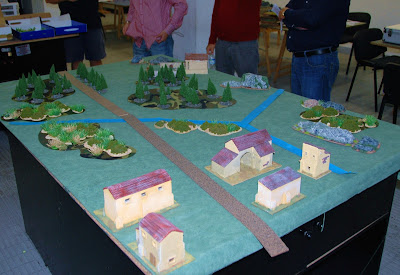 A key feature of the game was the village of Galatas located in the northern edge of the map. This comprised several large 2-stories stone buildings offering heavy cover to the defenders. The control of at least 2 of the village's houses was the German objective and the one to be denied by the Greeks. 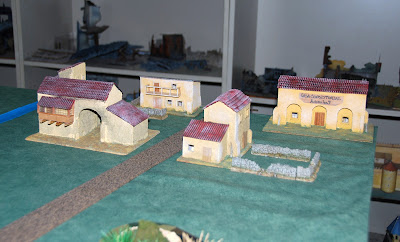 The Greeks were a mixed force of understrength rifle groups,  HQ sections and support weapons, although unlike in the previous game, they enjoy a relatively large number of high-level Big Men. We decided to make three battle groups (two rifle sections with 3 Big Men each and a smaller 3-man section with a Bren-gun and the remaining Big Man). The Greek started in hidden positions, placing the two rifle sections in houses "A and B"  while the Bren-gun occupied house "C" (see previous map ).
Unkown to the Germans, the Greek were very short of ammunition, and were forbidden to fire at long distance; furthermore, they have severe penalties for firing at medium and even effective range, exhausting its ammunition stock if rolling two 1s more than 6s.
The Germans started the game placed in blinds. You can see the initial deployment in the next photo (view from the Greek lines) and the first surprise to the Greeks was the number of units deployed on the table (covering the full width of the battle front). 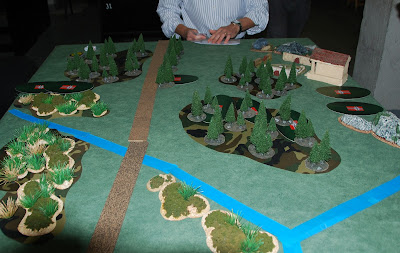 We suspected that at least some of the blinds were probably just scouts (dummy blinds). Taking advantage of our hidden positions and the dominating view  from the village, we quickly spotted and forced the Germans to deploy on the table the majority of their forces. 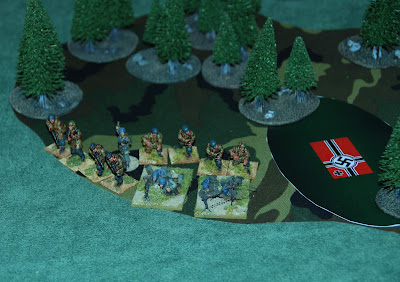 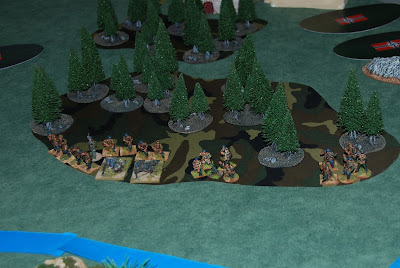 Once the enermy forces were revealed, the situation clarified. The  main axis of the attack﻿ was on the German's left  flank, where most of the likely assaulting squads were located. Assesing the situation, we saw no need to to change our initial deployment, as we had placed most of our forces in the right half of the village.
The second (not so nice) discovery we made was that the Germans enjoyed a nice allocation of support weapons sections. A strong detachment comprising several LMGs and a light mortar was placed at the edge of the woods facing Galatas. 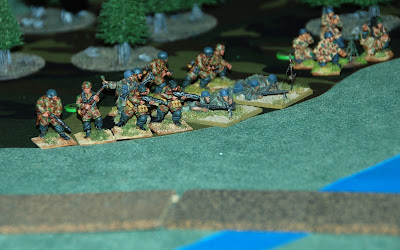 To the left of this detachment, the Germans also deployed  a very powerful medium mortars section hidden behind a major rock outcrop, assisted by a forward observer who also directed the fire of an off-board heavy mortar battery. 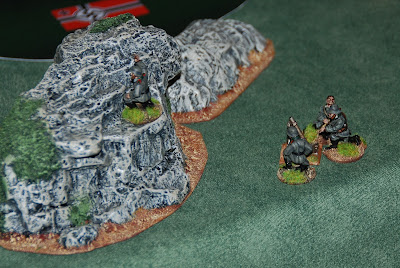 With the Germans reaching the outskirts of Galatas to our right, the Greeks started deploying their squads and putting some fire at effective and short range into the enemy forces. 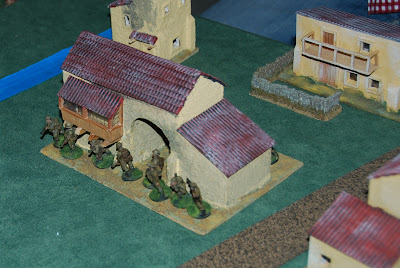 But then hell on earth fell over the Greeks: the Germans making a very good tacical use of their mortar batteries, effectively pinned down and suppressed the Greeks most of the following turns.... 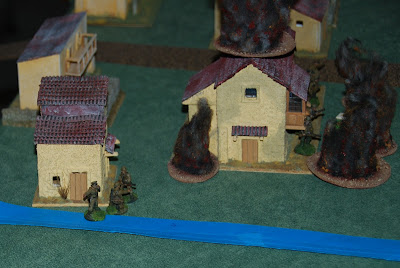 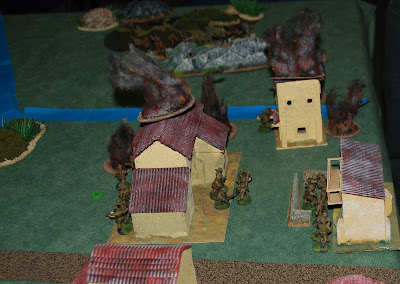 ...enabling the Germans to take the rock outcrop at the right of the village, putting their squads in an extremely good position to initiate a close assault in favourable terms on our flank. 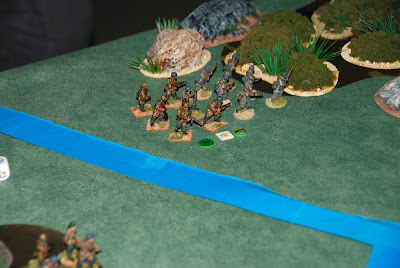 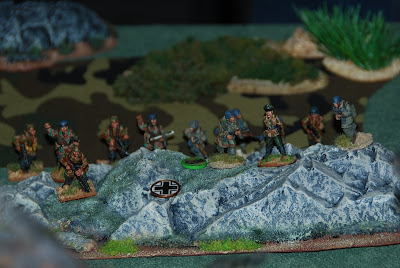 But sometimes too much of a good thing ... the Germans decided to delay any attempt to take the village, prefering to keep pumping lead over the Greek-defended houses, given their superior allocation of mortars and machine guns, aiming (no doubt) to wear and tear the Greek squads.
The heavy cover offered by the village meant that few fatal casualties were achieved and only a limited amount  of  wounds that the Greeks speedily recovered thanks to a large number of high-ranked Big Men among their ranks.
Furthermore, this delay in assaulting the village was playing in favour of the Greeks, as it provided time for some unscheduled reinforcements to arrive (a full New Zealand squad including a Bren-gun team). This was initially placed in the rear-most house of the village and then redeployed to the first line house (see photo below, the squad to the right); as you will discovere at the end of the post, we failed to make an optimal use of this squad in that position. 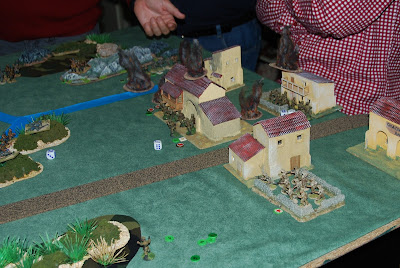 In the meantime, the Greeks defending the "A" position run out of ammunition and their situation was becoming desperate. If any Germans were to assault now,  their only defensive weapon were going to be stones and fists. The Greek command decided to move now the reserve section (located in "B") to reinforce the first line as the attack was inminent.
The Germans finally realised their mistake and decided to get things moving. A first assault was organised but with  one below-strength  section. It was quickly stopped on their heels by the combined fire of the rifle section in "A"and and the Bren-gun squad at "C". It finally went pinned half way between the right side of the village and the rock outcrop. Only two squad members survived, taking shelter in the dry river bed next to the house defended by a Bren-gun section (do not forget these two guys, they unexpectedly played a big rol in the conclusion of the game). 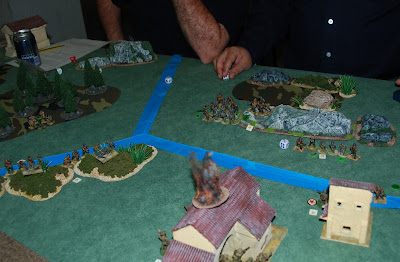 Having failed the attack, the Germans had to really scrap the barrel,  launching their very last reserves into the fray. A second larger squad supported by 2 LMGs initiated a final attack attempt. 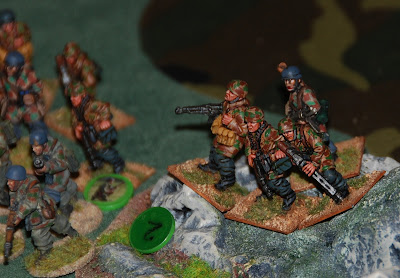 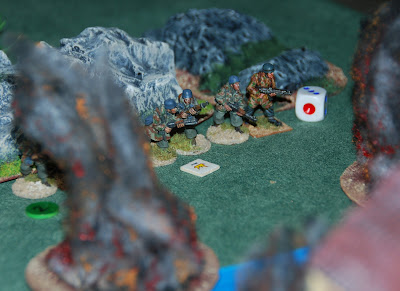 The German squad overrun the (now reduced to two-men) Bren gun section and finally entered into the house, albeit at a high cost  (2 casualties and several wounds). The end on the game still on balance... a weak German squad controlling one house... will the Greeks counterattack?... no luck, not enough inititative cards on the table when its Big Man was activated... and the New Zealand under fire could not move as far as needed to regain control of the house (only 1 die movement allowed under fire).
A draw then?... unfortunately for the Greeks that was not the case. You may remember the two-men German section hidden in the dry bed... not being under fire (Greek's rifle sights were loking into more threatening German squads), when their card was activated they just only had to (literally) walk unbothered with 2 dice into the second house (the one marked "B" in the map above) using their third action dice to get into it.
Teabreak!... End of the turn!!... No, worse indeed!!!...End of the game!!!!... Germans controlling two houses, Greeks defeated!!!!!!
Greeks in despair... we lost  the game in the very last move after an Homeric resistance... defeated by just two paratroopers that simply took a walk and occupy an empty house... do not want to see our faces in that moment.
My personal thoughts
I think we did a fairly good iniital deployment putting one rifle section in the front (section "A") to absorb the fire of the Germans and getting some support from the Bren-gun section in "C". The other rifle section was left in reserve in "B" to reinforce any potential assault on the front line positions or else to be redeployed on the left hand side of the village should the Germans had attacked by the other end.
However I reckon that we made two stupid (or not so stupid, considering the outcome) mistakes:
But also I think the German were lucky having these two figures in the dry river bed; otherwise at the end of the close assault they would been prevented from moving their assaulting sqaud any further and no other units (mainly the support weapons sections) were near enough to complete the objectives.
Next battle of this campaign will take place on Sunday October 31st.
Publicado por Anibal Invictus en 21:49