Easter Week in Spain is traditionally a big holiday break. In Madrid we'll be from Thursday to Sunday on holidays; but the first three days of the week I don't foresee much activity at work, with everybody travelling or planning to leave to the beach or the ski resorts on Wednesday morning, most likely I'll be returning home pretty early in the afternoon.

I’m not leaving the city so I was thinking this afternoon how best employ this lull of activity. Current plans include the possibility of playing 3 days at the club, as two of my gaming mates will also remain stranded here; I have proposed to umpire the 29 Let’s Go! pint-sized campaign for Chain of Command as we shall be able to play between 2 and 3 games until the weekend. Alternatively we may play some casual games

Painting wise, as I’m somewhat delayed with my El Cid project, I expect to recover some of the time lost and finish my Moor warband. Currently painting some Berber infantry and noble cavalry, I definitively want to finish these guys and idelaly start a levy unit of archers. We aim to start playing using The Crescent & the Cross by late April

On the reading front I’m about to finish the fourth book on the Arnhem campaign in the next few days. I managed to go through the classic A Bridge to Far, Urquhart’s and Frost’s memoirs and currently 70% progress of another great work It Never Snows inSeptember.  I have bought some excellent guides from Pen & Sword and want top do some planning for our club’s collective visit in November to the area coinciding with Crisis 2015 in Antwerp.

So these are my plans but you never know what I may end up doing. Any plans the rest of you guys? Would love to hear.

PS: Specially for those far from Spain, the photo above is not a celebration of the Ku-Kux-Klan, This is the typical dressdown in Easter Week in the country (serious!)... 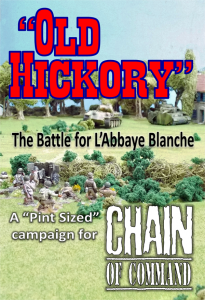 TooFatLardies has released a new campaign booklet for Chain of Command in its "Pint-Sized" campaign series. From its website:

Focusing on the action north of Mortain during the German counter-attack, Operation Luttich, we follow the action around one potion as Der Fuhrer Regiment of Das Reich attempt to push the US 30th Division aside.  Historically this is a much studied gritty defence by the yanks, Staff colleges aorund the world still conduct staff rides to look at the events.  We have foillowed the usual format, with historical background and period maps, then a selection of six potential battlegrounds to fight over.


Thirty pages long, "Old Hickory" contains an overview of US operations in Normandy and beyond from Operation Cobra to the German counter attack at Mortain, Operation Luttich.  It goes on to present a mini-campaign covering the defence of L'Abbaye Blanche, a key position to the North of Mortain where the US 30th Division stood firm against 2nd SS Das Reich, and Der Fuhrer regiment in particular.

The campaign is a total of six game tables with the duration running between three and eight games.  Briefings are provided for both sides, along with measurable objectives, period maps, force and support option listings and everything you need to play this campaign through to its conclusion.

Like all of our Pint-Sized campaigns, this is available for the price of a pint in our local pub.  We're sure that you'll agree, that is great wargaming value!
Publicado por Anibal Invictus en 12:07 3 comments:

Playing Kampfgruppes with Chain of Command 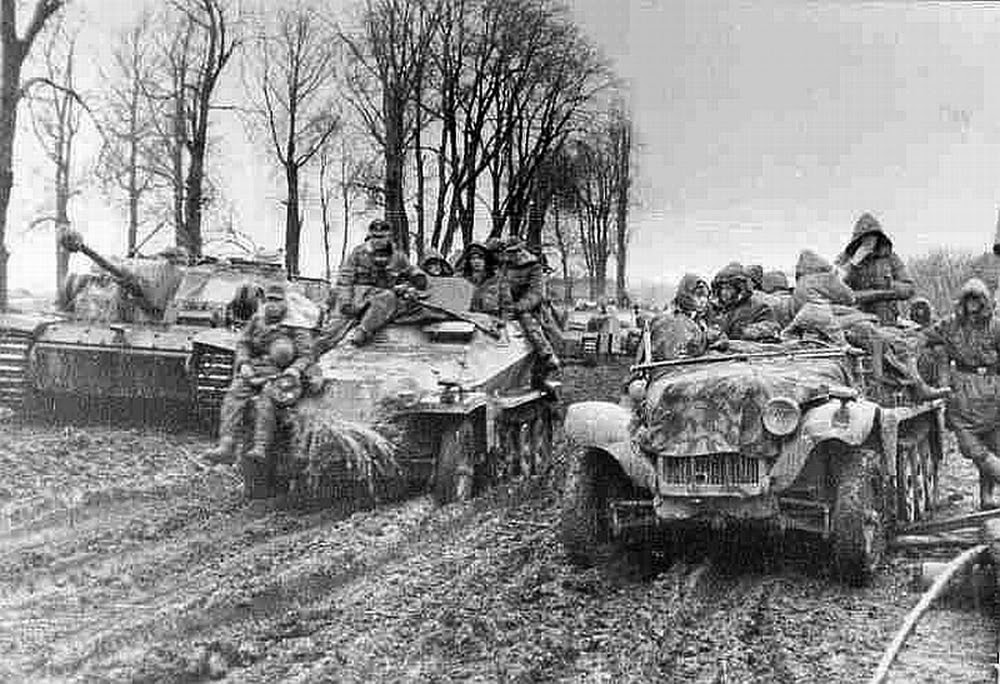 You may have noticed a lack of activity in the blog over the past two weeks. The fact is that I have not been idle at all, but after all the flurry with the last North African Desert campaign, I was longing to stay away from organising and managing the logistics of the games and to concentrate in roll myself some dice  on a wargaming table. Thank God, my club mate Alfredo took the lead and have been umpiring a couple of Normandy-based games over the last two weekends, ending with my abstinence period.

Besides playing, these two games have been helpful to discuss and test a couple of topics not fully covered in Chain of Command: fighting in build-up/urban areas and the use of kampfgruppes.

As you probably know, the German army used extensively ad-hoc fighting groups combining forces from different arms and units, the combination depending on the type of mission that the kampfgruppe had to undertake. As the war progressed and the units were below the OB theoretical complement (due to casualties or insufficient reinforcements), the use of this special groups increased, usually named after the commander in charge. With the British Empire counterattack today, our Desert Campaign started mid-January concluded with a failed attempt to take the Axis main HQ position. A long game this morning where continuous blows from both sides to the enemy had the battle unresolved almost until the last minute, when one of the British infantry platoons (Polish) moral level fell to zero, leaving the Allied side with no other option but to concede defeat.

The scenario today was the third rung of the campaign which corresponded with the "Attack to an Objective Scenario 6" of the Chain of Command main rules book. In this case the objective was the main HQ of the Axis armies located at the oasis of Wad-de-Fak and the prize was to capture Rommel himself! Alas it was not possible despite a daring and aggressive attack of the Empire troops. 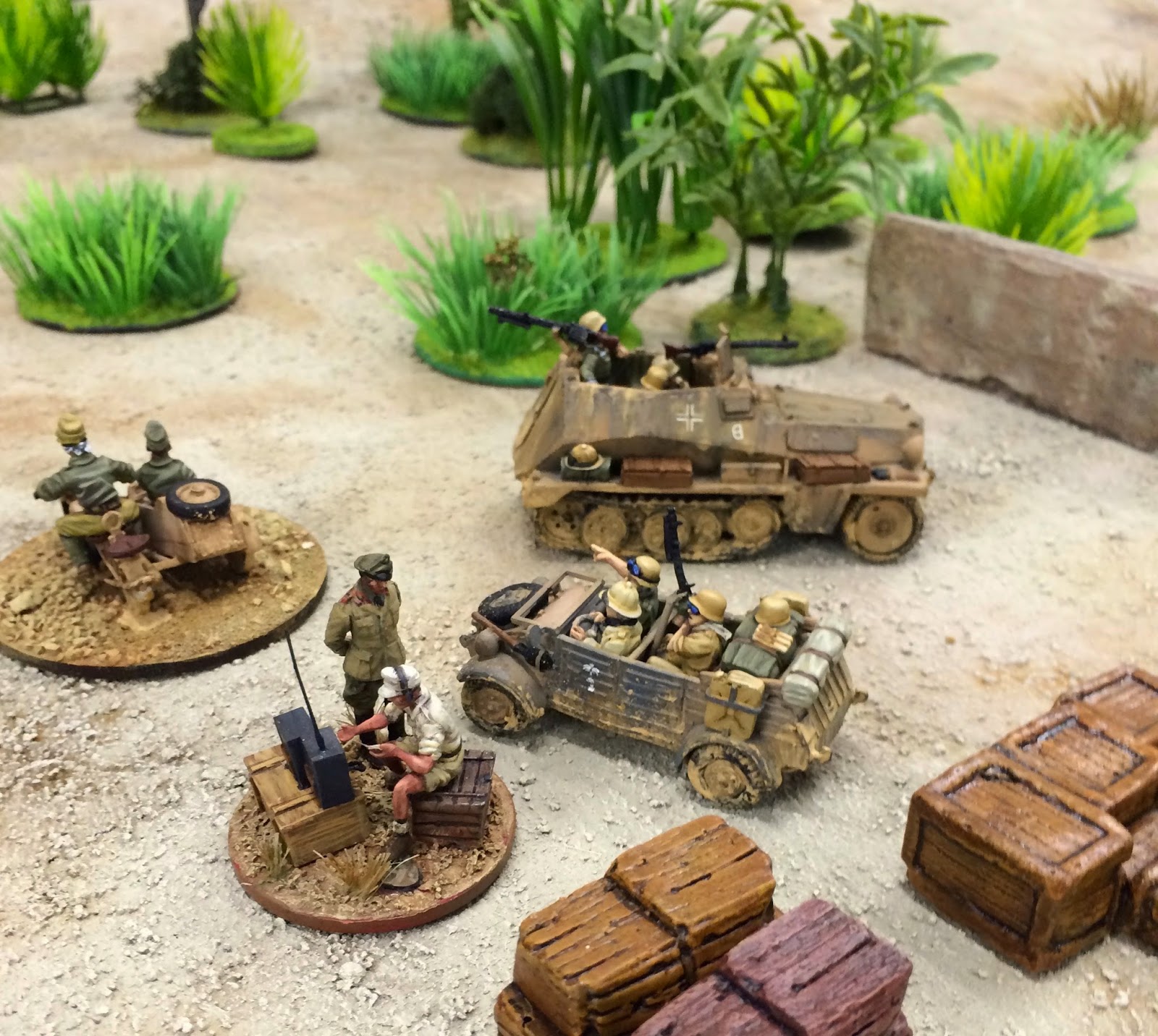