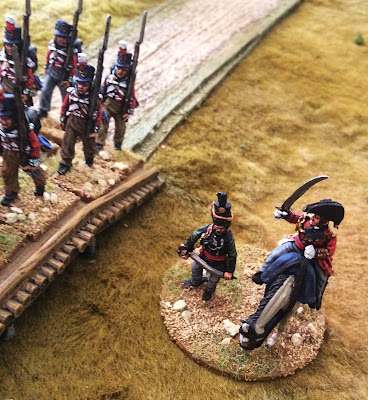 As many readers of this blog and the whole Lard fan community knows, Sharp Practice 2 was released on St George´s day. I received the pdf copy of the rules at 7.30AM sharp (sigh) on Saturday and my hardcopy, cards and tokens will hit home hopefully some day next week.
It was too tempting to lose this Sunday without at least giving a try to the rules; despite having just skipped the book on Saturday (… while busy preparing a major dinner at home to celebrate our 25th wedding anniversary), my club’s pals were of the same opinion and this morning we exchanged the first shot in a small skirmish encounter game. 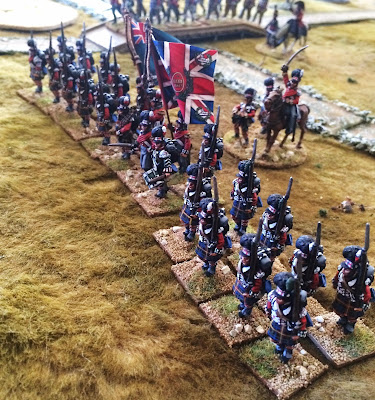 I played the French side with four line infantry groups, two skirmish group and one Dragoons cavalry group vs the a British army with a similar lay-out. I’m not looking to describe the battle in detail as it was a game frequently interrupted to clarify aspects of the rules and in search of the right tables in the tablet to fire and to move.
The most remarkable action was the charge of the French cavalry downhill against a group of KGL hussars that dare to get to close to the French. In the melee the Germans were massacred, losing 6 out of the 8 troopers and the group commander being seriously wounded. 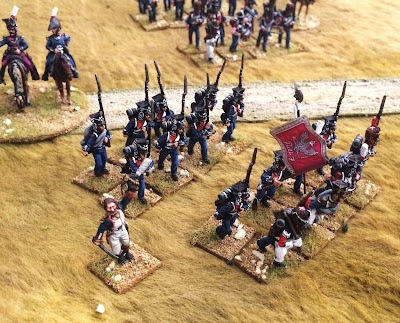 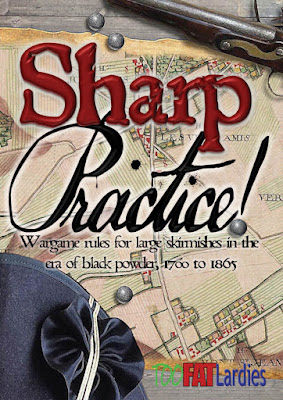 A little late to the party (I was out of Spain in a business trip the wople week), but I have just pre-ordered Sharp Practice, the incoming new rules by TooFatLardies covering the black powder period that is, from 1700 to mid XIX century.
The rules will be available on the 23rd of April, Saint Georges (but also the day our own national Cervantes died, that was instituted as the Book’s Day in Spain). In the meantime, TFL offers a number of bundles with the hardcopy of the book, cards and tokens needed to play at a significant discount… and in addition you get the pdf electronic version of the rules for free.  Detailed explanation can be found in Lard Island (the official blog) and the website.

Note that these are NOT Napoleonic period rules, but cover a substantial wider period including The Seven Years Wars, FIW, AWI, Napoleonic and ACW among other. And also that these rules are designed to play skirmish oriented battles, therefore do not expect to move large masses of models on the table; actually with 40-50 minis per side you can have a game, making them suitable to play with the larger scales (25mm or 28mm).

The initial release will include army lists for FIW, AWI, Peninsular Campaign,  ACW and the Indian Mutinity. However TFL is already working on a series of complementary lists that will available for free download and some of their popular Pint-Sized Campaign books (called because the price is the pint of beer in the author's favourite  pub at Saint Albans).

Currently I have put my sight in the Napoleonic period with a twist to the Peninsular Campaign period. But if the rules root firmly among my gaming pals, I cannot discard at all a Carlist project or a painting project covering the FIW and the AWI period.

So wallet is lighter and only rests now to wait patiently to April 23rd.