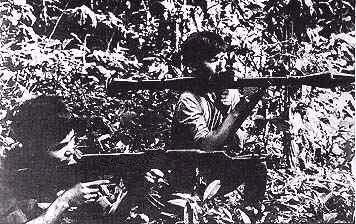 US Army 1st Lt Comps woke early that morning with a bad feeling... the briefing last night left him unease. He had to help an ARVN company to reach the hamlet of Mi Sac, reportedly to be a major centre of recruitment for Charlie, to interrogate the population and gather intelligence about the enemy forces operating in the valley.

"This is not looking good, definitely..." he told to himself while boarding his M 113 ACAV and leading his armoured platoon out of the safety of the American base.

Mi Sac was at the end of route 19 in theory under control of the Free World Forces but the last track was located between two dense masses of jungle, and dominated by a steep hill looking into the road... "Charlie's favourite terrain to play cat and mouse... even if  we are mouses clad in steel" Comps found himself thinking.

The trip was incident-free when the armoured and lorry column reached the dreaded area. An air recon mission early in the morning indicated no sign of enemies and the only visible activity that of the peaceful villagers tending the rice fields to the east of the village. 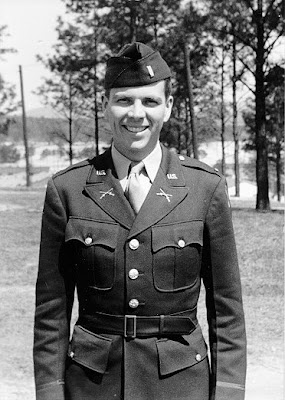 Still recovering my computer files from an OS crash*, I found this fogotten link among my old bookmarks, a series of short real war stories by a US infantry 1st Lt Bryan Bell, platoon commander in G Company, 313th Infantry, 79th Division in WWII. As he tells "my 136 days as a 1st Lt. Platoon Leader were the longest any officer lasted..." makes it even more interersting and not to miss the photos section, all taken by him.

Now that Chain of Command, the future skirmish IIWW rules by the TooFatLardies, testing is gaining momentum, there's some scenario inspirational materials here as well. 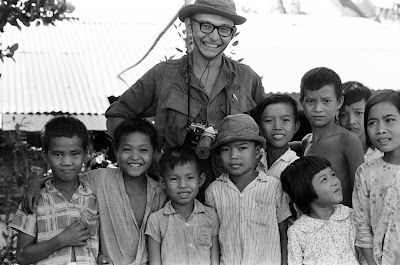 Unshamelessly stolen from one of my favourite bloggers, Big Lee, I can't resist brigning this to the attention of those interested in the Vietnam War. An army conscript soldier turned to photographer called Charlie Haughey took over 2000 photos during his stay in country.

After 45 years stored away, now they are being unearthed despite the emotional impact caused to the author. The first batch of 46 photos can be found here are really worth taking a look both for their quality and content. A MUST for anyone interested in the period. 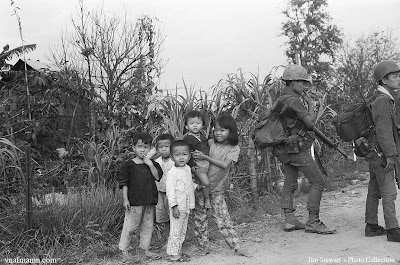 After a late email crossing last night, I found enough interest to play another Vietnam game today in the morning with our favourite rules Charlie Don't Surf.  As a new player was to be introduced to the game and some of the other gamers have been in the dry dock for several months, I decided to play a simple scenario to refresh the game mechanics, only involving  infantry. Browsing Surf's Up (CDS's companion book), I found scenario #7 "County Fair" interesting enough, on top of not having played it yet.

The context is 1967, the operations leading to win the minds and hearts of the population living in areas suspected to be controlled by the Vietcong. The Free World Forces mission is to secure militarily the hamlet of Rang Dong, only to be followed by a civic group with food and medicine supplies. 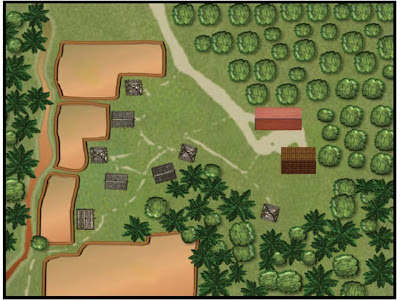 The map above shows the area of operations. A former French rubber plantation in the north east side, including two colonial brick buildings; typical local hooches are scattered around the rice paddies, at the edge of a thick jungle area.

The FWF comprised two US infantry platoons reinforced with one ARVN regular platoon of three rifle squads and a weapons section. The primary objective is to clean Rang Dong of suspected VC elements (20 points) and avoid any civil casualties (10 points). Given the nature of the mission no artillery or aerial support would be available except in the most dire conditions. 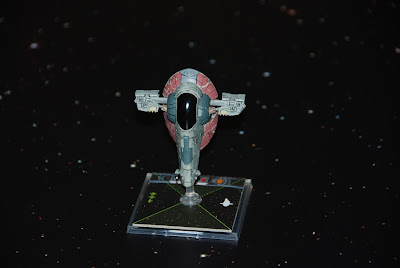 Father's Day long weekned in Madrid, Alex and me organized an X-Wing bash at the club, fighting a 200 battle with another father & son pair (Darío and Alvaro). It was also a good opportunity to put our new Slave model on the table for the first time.

After some discussion both sons aligned together and chgose the Imperial side against the Rebel (?) fathers (the world upside down...it used to be the other way round, at least in the 70s...), although they were reinforced with a new (significantly older) recruit arriving late to the club.

The Dark side deployed 2 Slaves, half a dozen Tie fighters, a couple of Advanced Ties and Darth Vader. The Rebel side organised two squadrons, the first with two X-Wings and one Y-Wing; the second with a similar configuration plus one of the new A Interceptors.


More than 3 hours of fun playing on a big table. At the end of the game, the 2 Slaves controlled the battlefiled thanls to their great firepower and strong armour, despite most of the Imperial fighters being shot down, but after wearing down the Rebel ships. 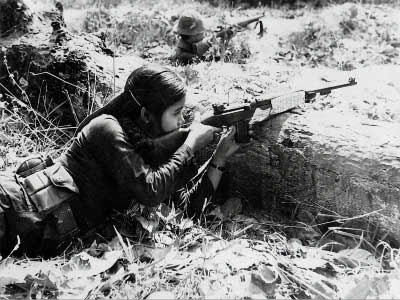 After a long spell, we played today Sniper! the second scneario of  Surf's Up, the companion book to Charlie Don't Surf, the TooFatLardies Vietnam-era rules for company size actions. The game was a total disaster for the Vietcong player (...who by the way, it was me), losing the game on both fronts, the military and the political.

This scenario sees a local VC force (1 platoon) vs a full US Infantry company. The VC is on a security mission in a village defending some rice and weapons caches, and owning a small tunnel network, The objective was to maintain the tunnel network intact (20 points) and as a secondary objective to keep at least 1 cache safe (10 points)

The US orders (main objective with 20 points) were to round up and relocate the villagers and to destroy the hamlet; a secondary objective was to find and destroy any food or weapons stored in the area. 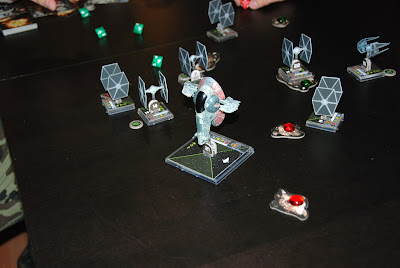 My son Alex and I went to our first X-Wing competition today, organised by a local games shop in our neighbourhood called "Mi Tesoro" (= Gollum's "my precious" in Spanish). This a small but extremely well-supplied shop run by brothers Juan and Josema, two very nice chaps and where my son spends his Friday evenings after school playing Magic.

We played 100 points and decided to go for the Rebel Alliance, deploying a squadron with two X-Wings (manned by Luke Skywalker and Wedge Antilles) with some droids and a Y-Wing model with the ionic gun tower. Being a kind of a rookie pilots, we did not have a brilliant performance, but ended up in second place... starting from the bottom, of course (sigh). The balance was that we lost 300 points in 3 games and shot down 42 points worth of Imperial spaceships.

Nonetheless, we had a lot of fun, the games were very friendly and all the participants were happy to share tactics and squadron formation ideas with us, so at the end of the day I think we significantly moved ahead in our learning  curve.