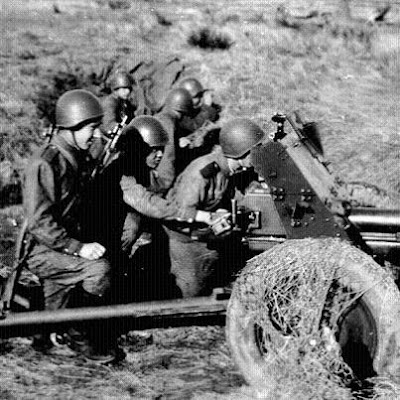 1st November  (All Saints Day) is a holiday in Spain, the day I finally put the ball rolling of the Vyzma of Bust campaign in the club, played with the TooFatLardies IIWW company size rules I Ain't Been Shot Mum. This was my first live-fire test with IABSM (although I've been thoroughly reading the rules over the past months), acting as umpire to a group of 5 players also new to the rules.

The similaties of IABSM to Charlie Don't Surf had its pros and its cons, as I missed  some differences in detail innitially (for example killed and shock results). But generally speaking the game went smoother than my initial expectations, also helped by the support of the rest of players. 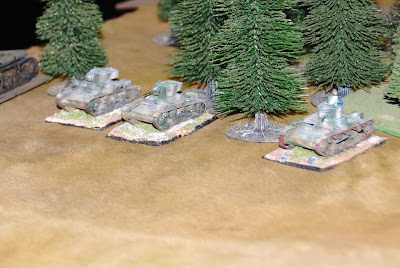 Vyzma of Bust is  a full campaign booklet with 19 interlinked scenarios, setting in Russia around the Smolensk area in the autumn of 1941. This first battle ended in a serious (and somewhat surprising) defeat of the German troops, losing 2 panzers, a hanomag and suffering several kills, without  making almost a single shot on the Russian trrops.

Forces and initial deployment
The Russians forces comprised a weak-green infantry platoon and a 4 x ATG section reinfoced with a section of four tanks (1 x KV1 and 3 x T-26) that have to defend a critical bridge in the rearguard of the Russian lines.  The tanks are short of fuel and the ATGs also suffer from limited ammunition supplies.

The German foces (veteran and high moral) were a motorised kampfgruppe made of two infantry platoons and a weapons platoon (3 MMGs, 2 mortars and 1 flamethrower), reinforced with a Panzer platoon (4 x Pz III); the mission was to secure the road to the bridge over the river,  the entry door to a blitz advance towards Moscow.

The Russian deployed initially in hidden positions to the north of the hills in the map. The Germans entered in blinds anywhere through the southern edge. The initial positions can be found in the following map. 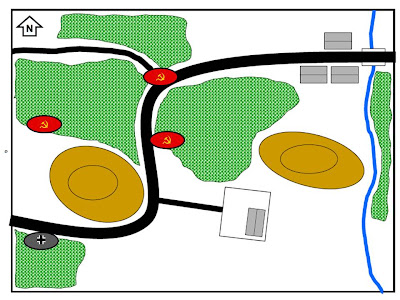 I have only indicated the Read Army units that saw action in the game. The unit on the left hand is the tank section, in camoufkaged position at the edge of the woods; the other two Russians units are a couple of ATGs, also hidden.

Battle development
The German planned to send two recon (dummy) blinds through the wood in the southwest edge of the table and try to spot the positions over the hill and at the edge of woods across the road. The idea was to sweep the road and eliminate any opposition, in order to comply with the scenario victory conditions

However, the German recons failed to uncover any enemy units and, on the contrary, they were quickly spotted by the hidden Russians, as soon as they moved out of the woods. The first German unit (an infantry platoon on foot) was quickly deployed on the table.


Failing to observe any enemy around, this infantry unit decided to make a dash towards the nearest hill, which prompted a quick reaction of Russian tank section that charged over the relatively defenceless Germans moving in open terrain.

The Germans made a hasty defense line along the slope of the hill...

... and a bloody exchange of fire at short distance took place over the following turns between the steel and flesh warriors,  obviously  the infantry suffering the most. At the same time, the Germans launched the remaining two blinds (the second infantry platoon and the Panzer platoon) to the right of where the battle was taking place...

.... only to be ambushed seconds later by the Russian ATGs...

...who blowed into pieces a PzIII in the first shot and disabled the gunsights of a second tank with its second shot.

The motorised German infantry platoon was also caught in the flank... 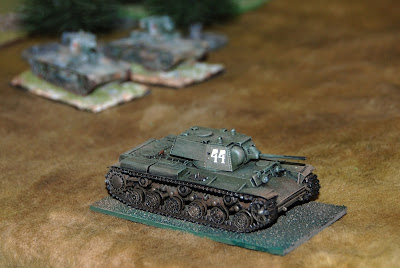 The surviving panzers tried to manouver and to get out of LOS of the ATG,  but in the following activation, the KV1 moved into an advantageous position,  blowing out a second Pz III with one shot.

The Germans had by now all its forces commited, the armoured platoon reduced to half strength, one infantry platoon virtually hors combat and the remaining motorised infantry platoon in dire straits.... the German players conceded defeat.

The last turns of the game and the final positions in the battle are illustrated in the following map. 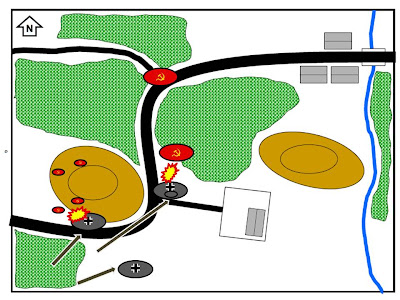 First impressions
A divided opinion among the players as you can imagine, with some finding the scenario unbalanced and others who thought the rules were biassed. The fact that the Russian tanks had four cards for activation (one for each machine) vs. 1 of the Germans (enabling the activation of the whole platoon) was seen as an advantage to the Russian; I don't agree, I think the Germans had higher flexibility. Also, in my very personal opinion  the move of the German panzers was too risky, charging in open terrain withouth attempting to spot potential threats ahead, bumping with 2 ATGs strategically located enfilading the road.

What we probably did wrong was to allow the Russian to choose a tank each time the activation card was drawn and not to assign a specific machine for each card, but again I don't think that would have changed the overall development of the game (although it may have saved the motorised infantry platoon some suffering).

The Russians were also very lucky with the cards drawn. There card deck included a "petrol shortage" and a "ammunition shortage" cards but they never came out across the game before the tea break.


Some players also found the Tea Break card coming out too often. We are to test using 2 break cards in our next game.

Finally, compared to Troops, Weapons and Tactics, I think this rules provide a faster game and cover a wider range of tactical situations. I´ll probably need to invest some more time in learning the details, as I did with Charlie Don't Surf, but it is clear that thanks to this campign I will accelerate in my learning curve.