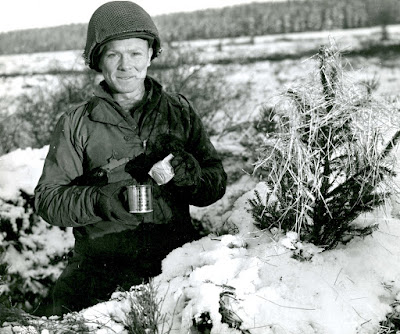 The usual post to wish my followers and other casual sneak-peekers of the blog (excluding the Russian bots) a most Merry and Happy Christmas in the company of your families and beloved ones.

Christmas Eve is a day of special celebration in Spain, where the family and close relatives or friends gather to share a (usually pantagruelic) dinner at home. Also it's when your most miss those who are not here like my father (pased in 1999) and my father in law (2015). 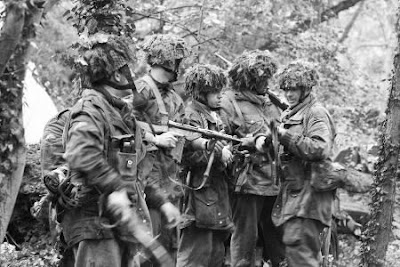 The IX Painting Challenge is now live. On this first day I woke early to attempt having my first submission ready before lunch time, which you can see in the Challenge website.
As commented in a previous post, my core project for this year’s Challenge edition will be a British Airborne platoon + supports for Chain of Command.
The most challenging aspect of the project is how to paint the camo scheme used by the British paratroopers in using the Denison smock. I know some wargamers whom painting camo takes them easily aback; but as I already experienced when I did my German Fallschirmjager army a couple of years ago, it is just a matter of experimenting and practicing.
I’ll try in this post is to show how I do it, and hopefully will help some people out there breaking the mental barrier of painting camo schemes. Incidentally, I had a similar mental blocking with the airbrush until this year; but thanks to the help of one my wargame club’s friends now I’m totally hooked to airbrush painting and what I regret is not having tried it before.
Before we start with this step-by-step guide, a couple of disclaimers: first, my painting style is oriented towards the wargaming table, not to win a Golden Demon; this means that I do not go into a lot of detail, just enough to look good on the table at a distance.
Second, I like to paint faded camos. Personally, I find painting pristine uniforms with bright colours utterly unrealistic when on the table, so I like a faded uniform finish in my models, reflecting the wear and tear over time. This is not to criticise anyone (as the Spanish say goes “on tastes, nothing is written in stone”), it is just how I like to paint my models.
So let’s star. 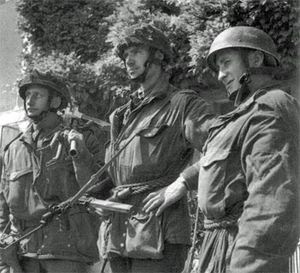 I’m already back home from hospital since Sunday, after solving my herniated spine disc problem on Thursday. Thank God, everything went right, a short surgery and being taken the first to the surgery room early in the morning was a real relief.
The whole affair is been less terrible that I initially thought (at least so far), but the doctor has ordered full rest and some short walks over the next three weeks til Xmas.  I’m surprisingly taking it very easy, reading a lot and watching some films in my TV cable channel.
Next visit on December 20th (coinciding with the initial Challenge day by the way), and I hope to be enough strong by then to at least put a couple of models on my painting table in the first day.
The days before the operation I was not at all idle and progressed substantially with the preparations towards the Challenge. I could primed most of the models I’m planning to paint including some leftovers of 28mm Austrian Napoleonic from last year and the core project for the year, the British Airborne. 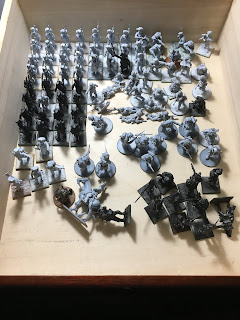 Half of the British are ready and while in hospital I received the Foundry order. These are very nice and crisp metal figures. Sculpting is excellent (early design by the famous Perry Brothers) and despite some differences in size, I don’t see it will noticed once painted and on the table. I’m tempted to buy a couple of more blisters considering the quality. 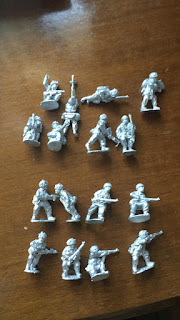 The Bren Carrier and para jeep were assembled but left for priming at my mother’s house (where I have my airbrush equipment). I also added nice Cromwell tank as potential support in the future games; and have acquired a 6 pounder on an impulse buy on Black Friday in a local model shop here in Madrid offering a 15% discount to the normal price. That same day I decided that it was time to go “pro” and bought (or better said “invested in”) my first set of Winsor & Newton series 7 brushes to make a debut in this Challenge.
That is for now. Hope to be in even better shape by the 20th and wishing all Challengers a fruitful prep- period!