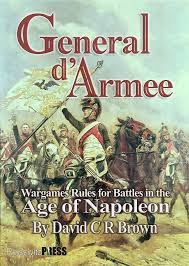 As many of you know, General d’Armee (GdA) is a new set of Napoleonic rules published just before summer by Reisswitz Press, the sister company to TooFat ardies. The author, Dave Brown, is a well-known and experienced wargame rules writer so I was expecting a good quality set, as it’s been the case.

Although I bought the book the release day and read thoroughly in my summer holiday break, I decided to refrain from commenting in the blog until after I had tested on a gaming table and could consider myself enough familiar with the system.
For that purpose, I gathered a small group of players in my local club and have been extensively playing since late September. GdA is not simple, on the contrary, the learning curve is fairly steep at the beginning; but now I feel finally fairly confident and familiar with the rules.


In GdA players seat in the saddle of a commander of an army or division (in Napoleonic terminology): 5 to 8 brigades, each composed of several regiments. The rules however can be stretched and extended to play with a full Army Corps. So at least on paper, GdA is suited to play medium to large battles. 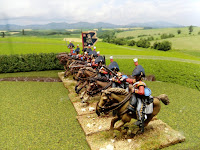 However the basic manoeuvre unit is an infantry battalion (300 to 1000+ men), cavalry squadrons and artillery batteries, representing the building blocks of the regiments; and this is as we’ll see later one of my main objections to the game.
General d’Armee is an old-school wargaming set; the 100 pages manual is basically all rules, with some photos and a good number of examples to illustrate or clarify the different topics. It is not designed for a light reading; it’s full of details and as I said before, it requires a fair investment of time in reading, annotating and playing with the book on the side for consultation.

Scales
The figure scale is not important: battalions are classified by size (small, standard and large) so you can apply your favourite model-to-men ratio (1-20; 1-30…). It is however relevant to have several bases by battalion as formations (columns, lines, squares) are an important feature of the game.
No need for rebasing however: you can use any available models you may already owned as long as there is some coherence in the way the armies are based. For example, I have my units based in Principles of Wars bases (20mm scale models in 40 x 25 mm bases, 3 minis per base) and have agreed with my gaming group members to use 3, 4 and 6 bases per battalion to represent small, standard and large units respectively.
The ground scale is 1mm = 1yard/meter for 15mm. Therefore a 6 x 4 feet size table represents a battlefield of 1.8 x 1.2 km for 15/20mm and 1.2 x 0.8 km for 28mm.


General d’Armee’s most distinctive feature is the command system already used in the ACW sister book Pickett’s Charge which I think originally derives from Dan Brown’s previous Napoleonic rules set “General de Brigade”.
How does it work? Each Army Commander has a number of ADCs based on the number of brigades under command. At the beginning of each turn, the ADCs are rolled to check availability, here introducing a first level of friction. 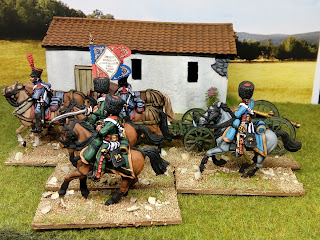 ADCs are allocated to the brigades to perform different actions (to speed up movement, to increase artillery and skirmish lines fire capabilities, help the brigadiers activating their brigades, commit reserves to the battle, etc). BUT you never have all the ADCs that you need to handle your brigades, so you have to plan carefully how to invest them in each turn.
On the other hand brigades are NOT automatically available. Each brigade must also be rolled to check its status, which could be “obeying orders” or “hesitant”. In addition, brigades that have suffered casualties during the game due to combat, can fall into “faltering” status which seriously dent their performance for the remaining of the game. This introduces a second level of friction in the game as not only (with the ADCs) you can perform all the tasks youd like to do, but also you never know if all your forces will be available when needed.
Summarising the command system: you first check the number of available ADCs, then allocate them to brigades with different tasks based on your combat plans; after that, you roll for the availability of the brigades (independently whether they have ADCs allocated or not).

Sequence of play
The system is a traditional IGYG with players alternating actions and the game sequence divided in phases: charges, movement, firing and melees.
Charges are declared in turns (the phasing player first, the non-phasing player after) but resolved simultaneously. Charged units can react evading, forming square or standing; and are offered the possibility of firing a volley before the charges arrive.
The charge resolution seems complex at first reading, but once played one realises it’s simple and effective: both players roll two dice, add or subtract several factors (experience, level of casualties of the units, formations…) and the difference in the results is  looked upon a table: depending on the difference, a unit may be flying away even before the charge is completed (high positive number) or the attacker can be rejected with casualties and rout back to its own lines (high negative number); both units may even stop and engage in a volley exchange at  short range; or simply, they fight the melee. 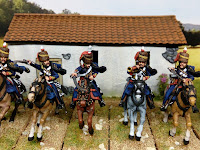 I painfully learned myself that  charges can be a murderous and risky affair if the attacker has not previously “softened” enough the target;  so try avoiding hot-headed attacks.
Movement does not require a long explanation. Being old school rules, units movement rates are fixed and depend on the type of formation (column is faster than line; line faster than square) and the terrain being crossed.
The firing mechanics are simple, ranges are obviously different if using rifles, skirmishes, infantry and artillery. Firing is more or less effective depending on the unit formations, level of experience and whether the units have moved or not.
Low dice rolls result in units losing “firing discipline”, forcing them to reform or continue firing with negative modifiers in subsequent turns. High dice rolls may force the target unit to take a discipline test, which may result in the unit retreating.
Firing casualties are accumulated and have an impact in the performance of the unit; no need to remove models but some simple accounting is needed (either annotated on a paper or with markers on the table)
Interestingly, low firing rolls of the artillery may cause “fatigue” (=casualties) to the firing battery and even suffer a low ammunition status; it is a way of forcing the player to use these weapons with care and not  firing randomly to the first enemy unit in LOS.
Skirmishes play a major role in the game, specially in the firing phase and the book devotes a whole chapter to explain the use and roles of skirmish screens and light infantry units.
The melee resolution mechanism is similar to that of the charges. Melles do not just cause automatic casualties on a dice roll but the difference in dice rolls also determines the fate of the units engaged in close combat (retreats, rout, second immediate melee fight, etc)

Moral
Except for the discipline tests triggered by fire or melees, there are no specific morale rolls to be made. Morale is embedded in the game in different ways:
Battalions suffer and accumulate casualties which affect their battle effectiveness until a point in which the units are “dispersed” or hors combat. 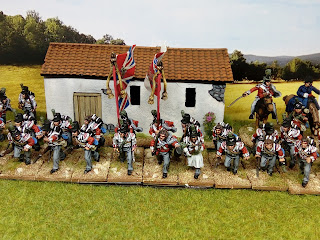 Charges, melees or firing may force battalions to retire, retreat or rout. When a brigade has tow retreating units or one broken unit, is consider in “falter” status; obeying orders become difficult and the player must invest precious ADCs in trying to bring it again into line: faltering brigades not obeying orders may even be dispersed, permanently losing one ADC in that case.

Other topics
As explained above, the rules offer an option to play Army Corps size games.

Although the preferred game option is for historical encounters, the book also includes a chapter detailing a point system to organise forces and games.

There are no rules for campaigns.

The book includes an introductory scenario quite useful to test and learn the game mechanics.

The rules are brilliantly summarised in four pages of QRS tables, avoiding most of the need to browse through the book while playing. Best QRS I’ve ever seen in my life.

GdA has a clear Napoleonic feel. If you are familiar with the period and the battles, you quickly realise how many of the rule mechanics transpire how commanders and armies perform historically: the key role of reserves; how difficult is to manage brigades once committed to battle; the strengths of cavalry to exploit breakthroughs or cover flanks but its weakness when launched against well disciplined and strong units…
The command system is one of my favourites of the book as well as the charges and melees resolution mechanisms.

What I like the least
The micro-management of battalions. I was expecting from the rules title (General d’Armee) to be managing regiments and even battalions; but the way the rules are designed you are forced to deal with command aspects undertaken by a colonel, hardly a role for an Army general.
One example of this is the skirmish lines: while I can agree that skirmishes are a major feature of a Napoleonic army, I don´t understand the need to manage at this level of command the skirmish screen independently of the battalions of brigades, rolling separately for fire, accounting for casualties, taking care of the distances to its parent force for effectively masking the brigade, etc.

Support
The TooFatLardies Forum has a section devoted to General d’Armee where players can put questions on the rules and other related topics. The site is efficiently covered by several curators including Dave Brown himself.
Except for the main rules book, no scenario supplements or other materials have been published so far. I personally miss (a lot) the lack of additional published scenarios. As far as I know, there are no plans in view to release anything.

Conclusion
Is GdA a good set of rules? Indeed it is and despite the need to invest some important effort in getting used to the rules, I enjoy playing my Napoleonic games with it.
Am I enthusiastically engaged with GdA? No, I cannot honestly say this is going to be “my” Napoleonic set of reference as for example is the case with Chain of Command for the 2WW period.
I’ll keep exploring alternative rules as they are available, although for the next months it’s unlikely that I play Napoleonics except with GdA 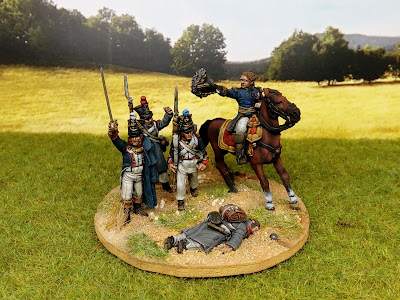