Back to Vietnam: Rawhide replayed 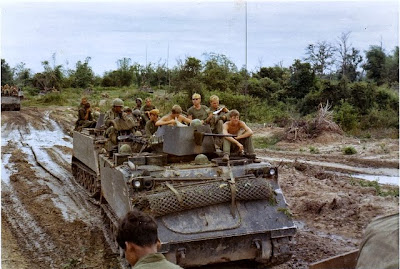 After a very looooooong spell (our last ganme was in March this year) we decided to take a short break  with Chain of Command and to play a Vietnam game with Charlie Don't Surf this weekend. I chose to replay Rawhide, scenario 9 of the companion book to CDS called Surf's Up, following the disaster outcome to the Free World Forces of the last time. This time they played much more cautious and that payed off in the end with a double military/ political victory awarded.


In this scenario an US armoured infantry platoon riding M 113s should escort 3 ARVN infantry platoons to the fishing village of Mi-Sac, with orders to put it under the control of the Republic of South Vietnam authorities. The Viet Cong mission is to frustrate the plans of the imperialist Yankees and their puppet forces, ambushing them at least twice (main military objective) and destroying as many APCs as possible (secondary military objective). 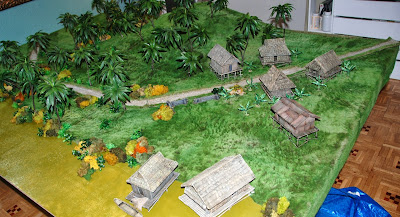 The VC forces are made of a platoon of local cadre forces armed with obsolete rifles, supported by an HMG, a RPG and a recoilless rifle fire teams. The VC also has two mines available to deploy any place on the table. 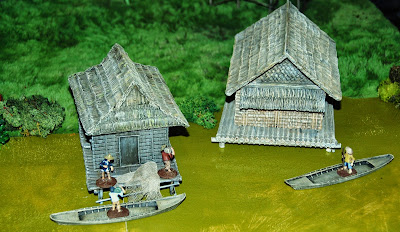 After a very busy long month, last night I finally organized a new game with Chain of Command. This time we abandoned the already familiar bocage country where most of our previous encounters took place and moved forward to February/March 1945.

The scenario aimed to simulate the desperate fights of an overwhelmed German army now close to breaking, scrapping the bottom of the barrel in terms of looking for manpower, and defending the motherland from the steamroller Allied armies. We chose to use the Scenario 6: attack on a position to organize our game.

In the table, to the north the outskirts of a German town (holding an important crossroads) defended by the two weak infantry sections supported by a HMG and plenty of AT material. To the south, two roads converging into the town and the landscape spotted with low hedges and light woods, probably the preferred place for strolling and Sunday walks before the war for the inhabitants of what is now a wrecked town.

Giveaways seems now a most consolidated tradition in the blogosphere, at least among those dealing with our hobby. Let me bring your attention to the Palouse Wargaming Journal run by señor Jonathan Freitag, from the US. To celebrate his first anniversary as a fellow blogger he's offering a very nice and high quality book selection to anyone signing up to his site... and the most important of all, the blog is really worth following. Thanks to Rosbiff for the headsup.

TooFatLardies just released the Belgian Army lists for the Blitzkrieg campaign era in his blog. Now we only need the Dutch (...and may be the Luxembourg Army list too? :-)...) to have the complete picture.

Longstreet at the club

Longstreet has finally reached our club and a group of devoted testers played their first game last weekend. The scenario was Henry House Hill and was published in WSS 56, a part in the battle of Bull Run. As if history repeats it self, the Confederation troops resisted a savage attack of the Union forces, inflicting a major defeat on the latter when the reinforcements of Colonel Jeb Stuart reached the field.

Some photos of the excellent painted 28mm figures and gaming table 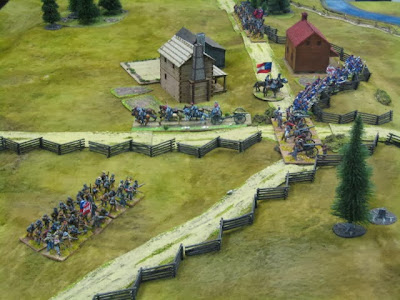