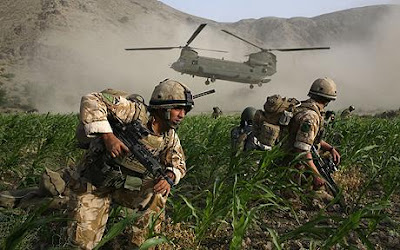 Apologies for the recent light activity of the blog. Real life issues are greatly interfering with my hobby life, and the blog is suffering from a more restricted time availability, that I frankly prefer to allocate to reading and playing basically (...and some painting too).

This post intends to provide some views on my recent foray in the  unchartered waters of the modern warfare conflict focused on the so called "war on terror" or "asymmetrical conflicts" (choose your term).

As you already know, I have taken a double interest in the period aiming on the one hand to understand the development of future geopolitical issues related to the growing instability in the Middle East (a key world-energy supply region) and on the other, to get ready for the publication of the TooFatLardies incoming rules Fighting Season, based in the successful 2WW skirmish rules Chain of Command.


As usual when I confront a new gaming period, I must first get a historical understanding. The term "history" probably doesn't fit well considering that it is present not past; so documenting would be a more accurate term. There's a lot of media resources available on the Internet, but also a surprisingly ample and high-quality offer of books, some of them already mentioned in a previous post.


The first thing I have realised is that Afghanistan and Iraq are quite different conflicts, and that the coalition armies are far from homogeneous. In that sense, my recommendation to anyone getting interest in it is to focus on one specific theatre and one army, which in my case has been Afghanistan and the British regular forces (...special forces are a chapter on its own).

Based on this my first reading recommendation to get introduced into it is Leigh Neville's The British Army in Afghanistan 2006-14: Task Force Helmand published by Osprey in its Elite series (volume 205).

This is a typical Osprey short 66-pages book but provides an excellent introduction to the British involvement in the country. A handy description of the different tours, the tactical challenges faced and solutions, composition of the task forces and evolution of the materiel used (personnel weapons and vehicles) by the army. Add to it some maps, outstanding high-quality photos and the traditional plates, worthy and useful as a complement to additional reading.


My second recommendation is Attack State Red, written by Col Richard Kemp and journalist Chris Hughes. Col Kemp was the force commander of the Royal Anglian Regiment, touring the Helmand

province in the spring of 2007 (Herrick VI).  This is a book written from a company perspective and provides an excellent review of the military events, zooming frequently to the platoon and section levels, including also the personal narrative of the soldier on the ground. If you are familiar  with Lt Gen Moore's book We were Soldiers Once and Young of Vietnam, you will understand the type of book we have here.

Each chapter focuses on one specific operation, told in high level of detail and well supported by maps and graphics.

The best work to understand the nature of the military operation at small scale, the use of different weapons available and the challenges posed by the Taliban way of fighting. In this period the adoption of IEDs and hit-&-run tactics was not as generalised as later in the campaign.

Next is Callsign Hades by Patrick Bury, a young south-Irish platoon commander of the Royal Irish

Regiment, who saw action in Afghanistan in 2008. Different angle to Attack State Red (the view of the platoon leader) and also a different narrative, as the book tells on the personal experience and it becomes quite honest and high emotional at moments, specially in its last chapters.

The daily struggle to cope with a mission whose objectives are difficult to understand by the troops on the ground, the loss of friends and comrades, the scarcity of equipment and resources to accomplish the mission, the permanent but invisible presence of the enemy in the form of surprise attacks and the constant threads of IEDs ... all is masterly described in the book.


In the end the pressure is too much for the author who left the army in 2009 despite a clear vocation for military matters  from its very early child years.

Last but not least I'm currently reading Dead Men Risen. The book describes the story of the Welsh

Guards tour in 2009 and contrary to the previous works, it's been written by a journalist (Toby Harnden) who spent time with the unit in Afghanistan but who could also conducted a significant amount of interviews and document research in the UK. The book was awarded the 2012 Orwell prize. If I have to use a word to describe this book is "disturbing", highly in fact. The Welsh Guards as far as I see were one of the units to suffer more casualties in the campaign, including its battalion commander Lt Col Rupert Thorneloe (first high-level casualty since the Second World War), prompting a major political row in the UK as it questioned the capabilities of the British Army to conduct the mission.

In which sense the book is disturbing? Well, each chapter is in fact the story of a person or group of persons who will die or will get seriously injured by the end of it. Harnden goes into great detail to introduce us to the life of each of these soldiers, who they were, how they were seen by the families and friends, who their families are, etc. You know that irremediably all these people are going to have their lives shattered  by the end of the chapter. A homage to the victims, I'm really struggling to end the book, to be totally honest. Probably the best of the four I reviewed but a very hard reading, I don't think I can recommend generally. 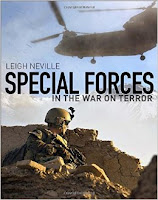 I also have in store another og Leigh Neville's work, Special Forces in the War of Terror also published by Osprey. This is not the typical 66 pager but a large 350+ pages lavishly illustrated and using quite recent information and documentation from the special forces actions in Iraq and Afghanistan mainly, with an additional chapter about Lybia, Somalia, Yemen and the most recent Syria theaters. I haven't read it yet, just skipped through it, but in principle looks another worthy work to have in your library.

I think this is enough reading to tackle the British in Afghanistan. There are seveal other books recommended in the TooFatLardies Yahoo Group and you can also take a look to the bibliography annex included in the British Army Osprey reviewed earlier in this post.

Finishing painting my models and start testing Fighting Season ranks high in my agenda, hope to start commenting soon on how the game works.