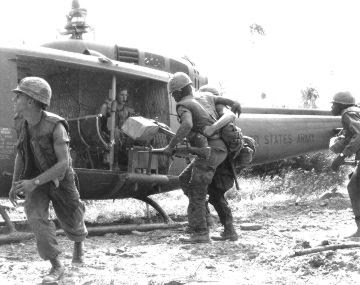 The scenario takes place in 1967, with the US forces supported by some local RVN police squads having the mission to evacuate the civilians of a hamlet and destroy the village, depriving the Vietcong forces from local assistance and infrastructure. The Vietcong must resist and cause maximum damage to the invading forces and his southern puppets ("3 strongs missions") and eventually retire in good order; the mission is considered successful after completing 3 ambushes.

The mission was a total disaster for the US forces, that had to call their helicopters to evacuate the area in a rush with heavy casualties. After arriving to the campbase, the Company commander, Captain F.A. Lure has been sent to Saigon to undertake a new assignment far from the front line.


The following map shows the initial deployment (all Vietcong forces hidden, Americans in blinds) and the initial moves. The Americans decided to follow three aproaching lines (one platoon each) which unfortunately were covered by some strong VC units in hiding places

The three main events of the game took place in the three areas highlighted in the map (A, B, C).
In the first area, the VC placed a bunker with an MMG team inside overlooking the road to the west of its position and the  rice field. The Americans  moved carlessly looking to take a position at the edge of the jungle area and left the unspotted bunker behind. The VC player on the blind card  and called a first ambush on the American platoon.
Once they recovered from the intial surprise and casualties, the platoon commander positioned the three squads for a counterattack, one firing to supress the MMG and the remaining two approaching to close assault the position.
Following a fierce hand to hand combat, the outnumbered VC (a 5-crew MMG) were wiped out, the Americans taking 2 prisioners who were escorted to a landing zone for further interrogation at the camp base.
In the meantime (B in the map), the second American platoon was slowly making an advance along the road running east-west while spotting any potential trap (lesson learned from a previous game: bobby trads DO exist in Vietnam) and hidden units around a 180º arc. After the second move the Americans were spotted by a hidden unit, increasing its nervousness as at the tea-break a VC sprang to the left the unit (unknown to the Americans, containing just a RPG team manned by two men in a helicopter search-hunting mission).
As two squads turned to face the threat from the flank, a third was sent forward in the open, only to be ambushed by a full VC platoon (appointed to be the die-hards of the Company) hidden in tree copse in the center of the table.
The American squad paralysed by fear (...and by the lack of orders from his platoon Lt)  was reduced to half the initial size and  additionally took a critical wound, forcing the Company medic to go in support and the company commander to call a helicopter for an emergency evacuation (more on this later).
Another young officer just commisioned from West Point  (with very little knowledge about the real facts of war), ordered a second squad to charge the VC unit...
... and as expected  being put out of action and the brave officer ending his (short) career in a plastic bag.
We turn our attention now to the southern half of the table (C location in the map). There we had the third American platoon patrolling in the dense jungle foliage, with a South Vitenamese police unit covering the flank. Half the way to the edge of the jungle, the Americans were for the thrid time ambushed by another hidden VC platoon, fortified in a well-defended trench line.
The VC unit commander however decided to play conservative and instead of firing for a second time in the new trun, pulled back in blinds toward the edge of the jungle. The South Vietnamese police unit tried to outflank the VC, but was caught in turn by the rear by the fire of another MMG piece hidden in wooded area.
At this moment, the game was a clear win for the Vietcong player. The village was safely under communist control (20 points) with most American units accumulating high losses and shocks; the Americans had been ambushed 3 times already (10 points); and American casualties were 15 versus 2 of the VC squads.
The rest of the game saw the VC units retiring in good order to fight another day...
...and the Americans eagerly waiting for air transport to evacuate their serious wounded men and VC prisioners
All in all, a fantastic gaming afternoon. CDS worked really well, and I noticed that the players are increasingly getting more focused on the tactics than on the system mechanisms, which in my view perfectly summarises the quality of the rules. 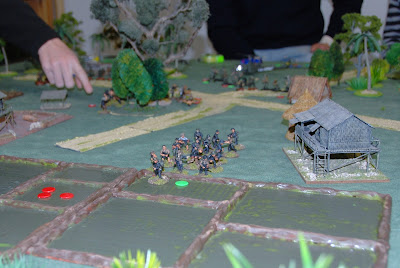 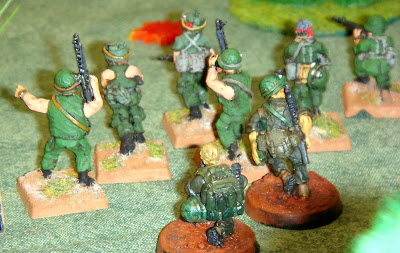 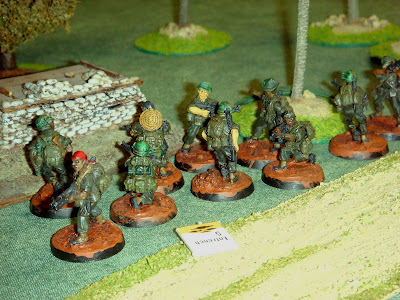 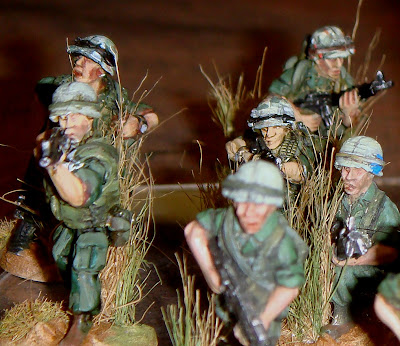 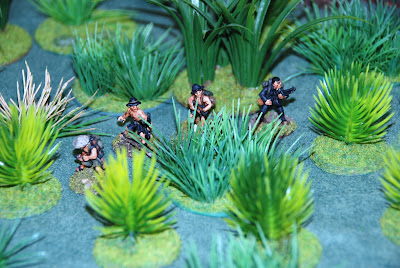 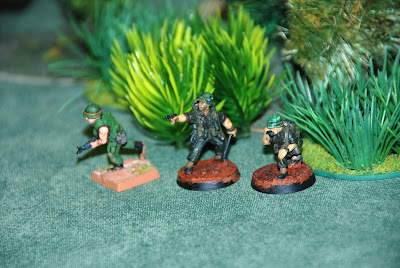