This morning we have played a second introductory game to the TooFatLardies company-sized Vietnam-era rules Charlie Don't Surf.  The game was based on the first scenario of the companion book Surf's Up, initially played a month ago (se here the battle report)  but with the addition of new sections of the book: the American forces had some artillery support available and the Congs could enjoy some tunnels and deployed a couple of nasty bobby traps.


The game started with the American blinds moving very cautiously through one of the long edges that happend to be the tactical edge of the Vietcong player, putting in initial disrray the whole strategy of the communist forces. The Americans victory conditions were to find and destriy the enemy's food stores, securing the village perimeter; the Vietcong were subject to the evasion mission victory conditions, that included ambushing at least twice the Americans and then to leave the battlefield in good order (preferably through the tactical edge). 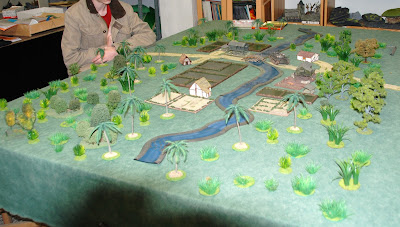 Two American platoons deployed at boths sides of the road followed by the Company HQ, while a third platoon (blind at the rear) moved to the right aiming to enter the village thoiugh the niorth side moving along the river bed.

The battle saw a very cautious American platoon moving by squadas to the bridge crossing the village, spotting to any suspicious position where the Congs could be hiding. Despite that  two squads suffered the blast from hidden bobby traps (located in the main road); bu this move saved the day to the HQ section that was going straight into the first bobby trap.

The other platoon moved to its left and deployed along a line of rice fields. 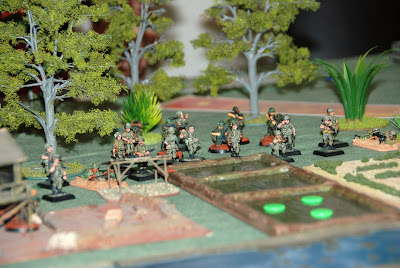 In the jungle behind this platoon a Cong blind emerged and the commander decided to hunt the Charlie... only to fall in a double trap: the murderous fire of an HMG in a bunker just across the river and the ambush of a local force squad hidden in a tunnel in the middle of the jungle. This Cong force returned to the tunnel and the Americans did not dare to follow, collapsing the entrance.

The rest of the game saw other American forces chasing ghost blinds in different parts of the table (this time the Vietcong player made a very good use of dummy blinds and the DiDi Mau card to create additional dummies, increasing the confusion and frustation of the American player).

In addition to the tunnels rules, we also had the opportunity to test the artillery rules (a very accurate FOO put a couple of fire boxes just in a Cong bunker position, putting to silence the HMG); the close combat rules; and the critical wounded and medic rules, including an emergency evacuation with a casevac.

After four hours playing, the situation was very much even, with the Americans firmly consolidated in part of the village, but with the two main Vietcong platoons still intact (one still hidden and ready to ambush an American squad approaching). None of the food caches were yet found. As lunch time was looming, we had to stop the game. I consider it a draw. All players expressed their satisfaction with the rules and were happy to try again.

This time I could not take many pictures, as most of my time was used in umpiring the game and explaining the mechanisms to 3 new players. This was also a good oppotunity to put on the table new rice fields, made by opur industrious club mate Santiago and his son Santi (see in some of the photos).

As Tuesday is Constitution Day in Spain, we will meet again in the afternoon for a new game and will likely introduce some new sections of the book (helicopters and possibly an AFV).

From the pint of view of battlefiled accesories, ee clearly need some more American minis to be painted and a lot-lot more jungle scenery to achieve a much better looking table. Some houses are now being painted and will be put on the table over the next few weeks. 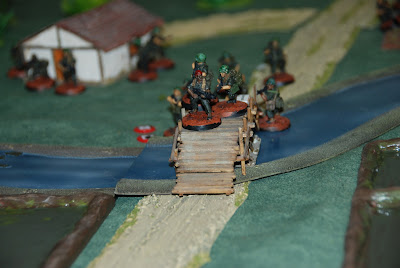