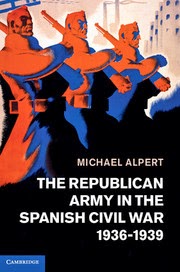 Just to bring your attention to this high-quality book review of Michael Alpert's classical must-read work at the IIWW Military Operations Research Group blog (one that I strongly endorsed and you should follow in any case).

This book has an interesting story in itself:

The first edition  was published in Spanish in the late 60's but not in Spain;  this was the type of topic obvioulsy disliked by the Franco's regime censorship office!!  The edition was undertaken by Ruedo Ibérico, a France-based editorial group run by a group of  Spanish Republicans exiled in the country after 1939.

Incidentally, my father (who was not exactly a great Franco fan) used to "smuggle" books from this editorial any time he had the opportunity to travel abroad ... and I'm now a proud owner of a first edition copy :-)

A second and greatly updated edition, after the declasification of some of the Civil War archives, was released a few years ago... and yes this time it was publised in Spain.

Nonetheless, I must say  that the English edition is surprisingly pricey (GBP 65!!), specially compared to the Spanish edition (€25) and I don't understand why the price differential; although the book is highly recommendable, think twice before commiting to such an investment. 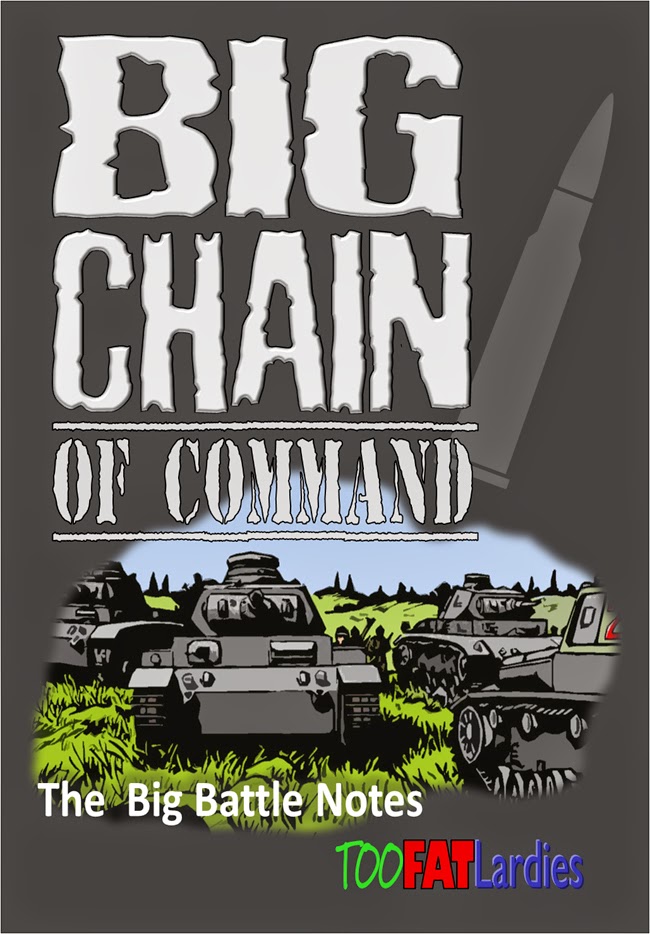 Ufff! No summer break at Lard Island this year. If last week we had the Winter Storm campaign pack, today a new short (a 13-pager) but exciting publication (available for free download) that allows to play larger battles (more than 1 platoon per side) and to field armoured forces with Chain of Command.

I've just skipped through it and to my relief the core of the system remains unchanged and you only need to make some small tweaks and adaptations to play. Very timely for my gaming group, who was already discussing and testing how to put more tanks on a table looking into our second campaign in Africa.

PS: These days is Chain of Command's first anniversary. Reviewing  my wargaming activity over the last 12 months in the blog, I've just realized that 99% of my games have been with Chain of Command and no signs of exhaustion yet, neither me, nor anybody of my gaming group.... on the contrary, everyday more excited... and facing September with a full pipeline of new games/campaigns: Spanish Civil War, a second Afrika CoC campaign, Villers Bocage and Winter Storm scheduled for Christmas/early 2015. 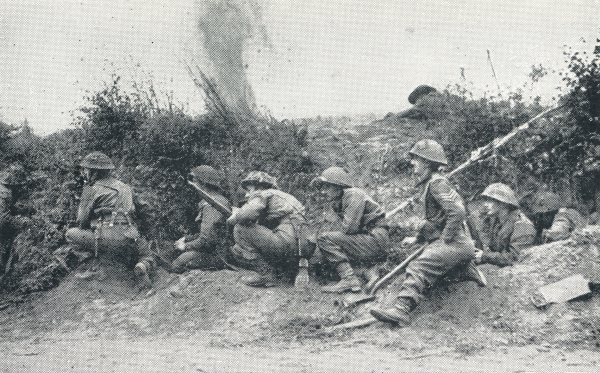 The Chain of Command game played last Sundaybelonging to the Villers Bocage campaign (battle report  here) prompted a heavy email discussion and exchanges among our gaming group which resulted in the decision to play the full campaign, starting as early as... today!

The battle took place just a week after the D-Day landings and was related to the early British attempts to take control of the key city of Caen. Elements of the 7th Armoured Division exploited a gap in the German defense line west of Caen and moved towards Villers Bocage attempting to outflank the Panzer Lehr Division.

The battle is well known for the bloody defeat suffered by British armoured forces in the village itself when ambushed by the Tigers of the 101st SS Panzer Heavy Battalion (Whitmann); but this campaign is focused on the actions of the infantry formations 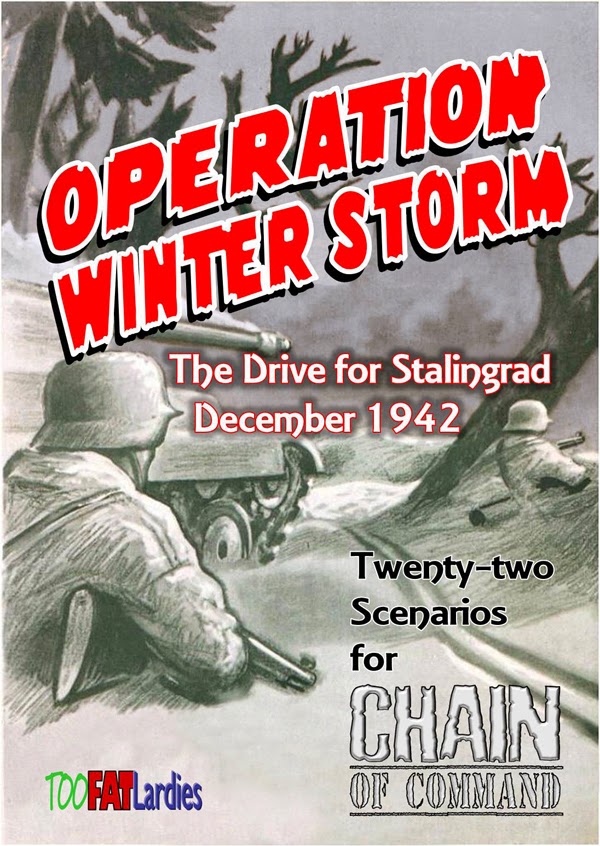 Exciting news this morning at the TooFatLardies HQ. Winter Storm. a new scenario and campaign book for Chain of Command has been released (perfect timing for my weekend reading). The booklet was written by Richard Morrill ("the other Richard"), long time Lardista and fellow blogger; you can follow him in his blog "The Rat Report".

This 94-pages supplement comprises 22 fully detailed scenarios, organised in 4 mini-campaigns that can played individually or interlinked. The book deals with the German attempt to relieve the siege of Stalingrad in December 1942. Together with the scenarios, several new army lists have been released including German Panzergrenadiers or Russian patisan units, all with the corresponding support assets adapted to the year and theater. A nice bibliography appendix is also included (much appreciated!)

The book is also compatible with the CoC's campaign supplement At the Sharp End with minor variations, explained

Although adapted for CoC the scenarios and information can be generally used for other rules sets at the same playing scales (Platoon-size encounters) ...and at a cost of 7 pounds, there's limited risk of loss in your purchase.

Architecture in La Mancha: A Photo Report of Almagro 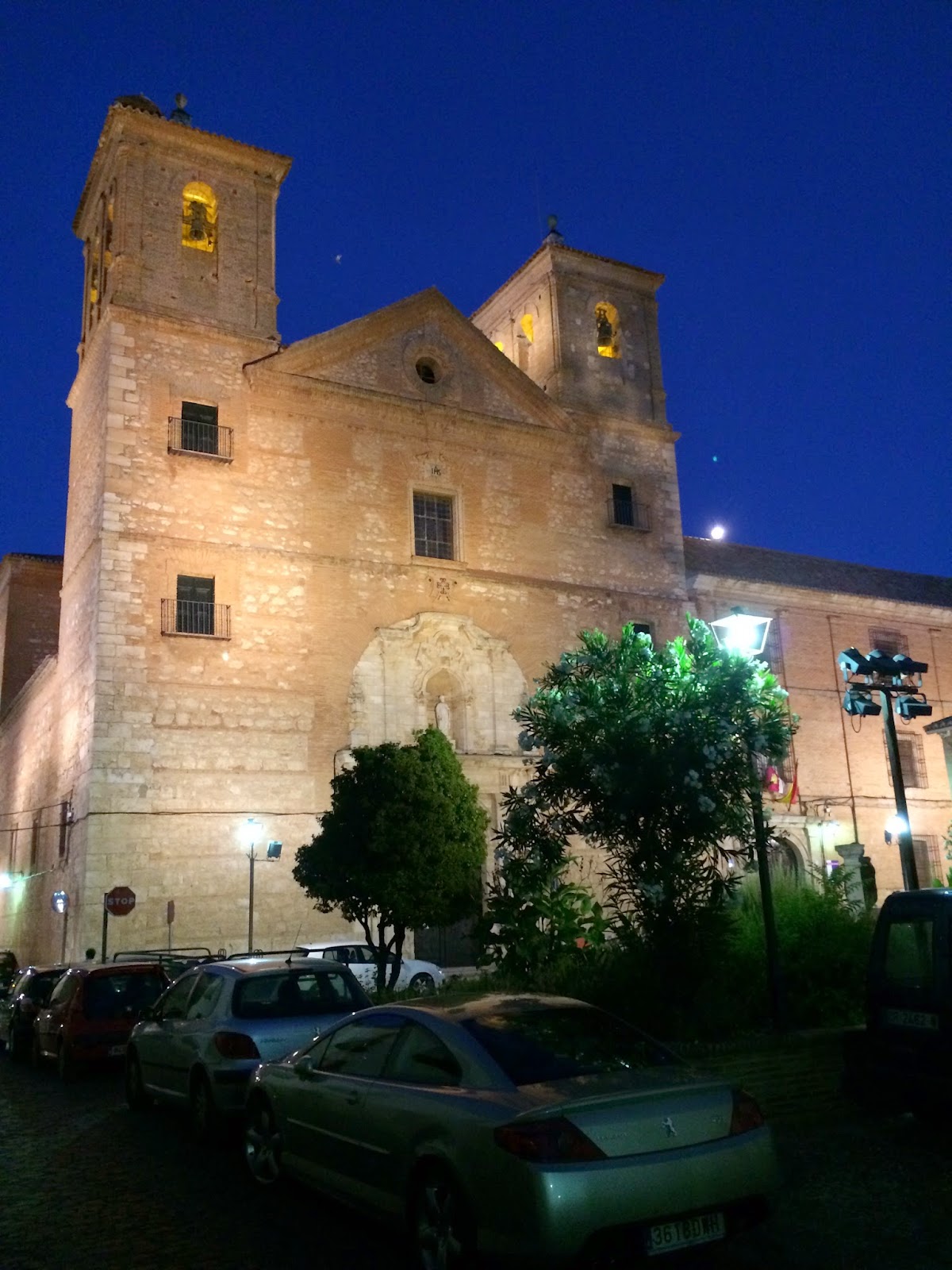 In early July I spent a weekend with a group of friends at Almagro a beautiful town near Ciudad Real in the La Mancha region and at about two hours by car from Madrid. Almagro is well known for his traditional architecture typical of central-southern Spain, its buildings and main square (Plaza Mayor) from the XVI-XVII century. Almagro was the main seat of the Knight Order of Calatrava, a powerful and important order of the late Reconquista period.

Almagro is also the site of one of the oldest theaters in Spain ("Corral de Comedias"), placed inside the patio of a tavern and famous for the plays performed of the golden age of Spanish literature (Siglo de Oro) major writers between the XVI and XVII centuries. After a long decay, the building was restored in the 50s and in July every year a major international theater festival takes place (which incidentally was the reason of our trip), with classical as well as modern plays are performed.

The town streets, residential houses façades and major buildings (palaces, monasteries, churches...) are in extremely good state and when you walk those streets is like travelling 500 years back. What follow is a selection of the photos I took in two different trips (this year and in 2010), aiming to serve a source of inspiration for those of you (specially from abroad) who like playing wargames in a Spanish context, appropriate for any period from the Napoleonic or Carlists Wars to the Spanish Civil War.

I hope you find it useful and may be inspirational of you are a scrtachbuilder aficionado... whatever the case, enjoy the photos. 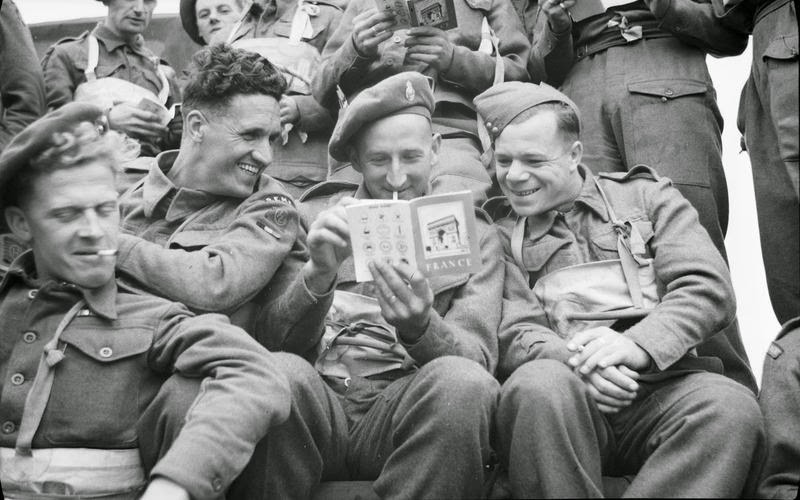 Heads up: Have your purses ready, gentlemen as Pen & Sword has announced this afternoon an eBook sale that will last until August 19. Get one eBook free for each one (not for each two, as I wrongly wrote initially) acquired in the online shop. A must for any Napoleonic, WWI and WWII wargamer aficionado... and also worth looking if you play the Ancient period.

Off topic: Please meet Joe Ledger, my new favourite secret agent... well not totally new as I started reading his novels last summer. I cannot remember where or when I heard abut this character and the books written by Johnathan Maberry but these are the perfect relaxing literature for my lazy summer days.

Believe me, I'm not a fan of popular bestsellers but these are the best action books that you could probably find in the market. The introduction is the Wikipedia article tells it all

The Joe Ledger series follows the titular Captain Joe Ledger, a former Army Ranger and Baltimore Detective who is hired by the clandestine Department of Military Sciences(DMS), as an investigative agency pursuing threats to the US and the world at large by terrorists who are using cutting edge and exotic technology ranging from designer pathogens that create zombies to transgenics used for ethnic cleansing.

So there you go, plots that combine zombies with jihadist, in a contest where the DMS a secret undercover US government agency fight different ultra-secret terrorist organisation that make look Spectra as a kids´ kindergarten

The plots are great, the characters are each one unique (the main heroes and villains, but also the secondary personae) and the action trepid from page one to the end... I got literally glued to the book almost to the last page once I start reading one of these books (...and that alos explains why I only read them on holidays!!)

So far I've devoured Patient Zero (zombie jihadists attempting to overtake the Western World), The Dragon Factory (genetic engineered army of supersoldiers) and The King of Plagues (a super plague threatens to end with all human trace from earth), the latter concluded last night; and likely I will take on Assassins Code (already downloiaded into my Kindle) before the end of August.

Demise of the Panzer Lehr - A Chain of Command Battle Report 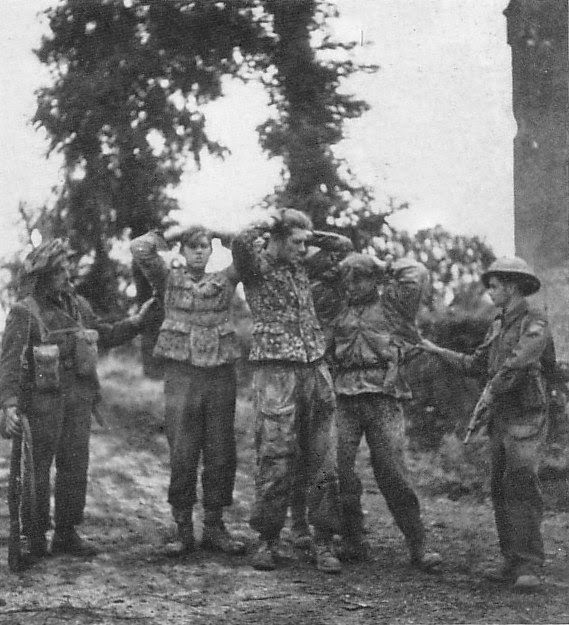 This Sunday we played the second scenario of the Villers Bocage campaign for Chain of Command that you can download for free from the Playingtheodds blog. The campaign's background is Normandy '44 and delas with a set of pitch battles between the German Panzer Lehr and the British 7th Armoured Divisions. This is a an exceptionally well structured campaign that we plan to play entirely sometime in the autumn winter, but today we went for one of the scenarios.
The scenario pitches an attacking British force (an infantry platoon with supports) vs. an elite German panzergrenadier platoon. The latter are a very powerful unit with 2 x LMG teams in each of the 3 sections of the platoon. 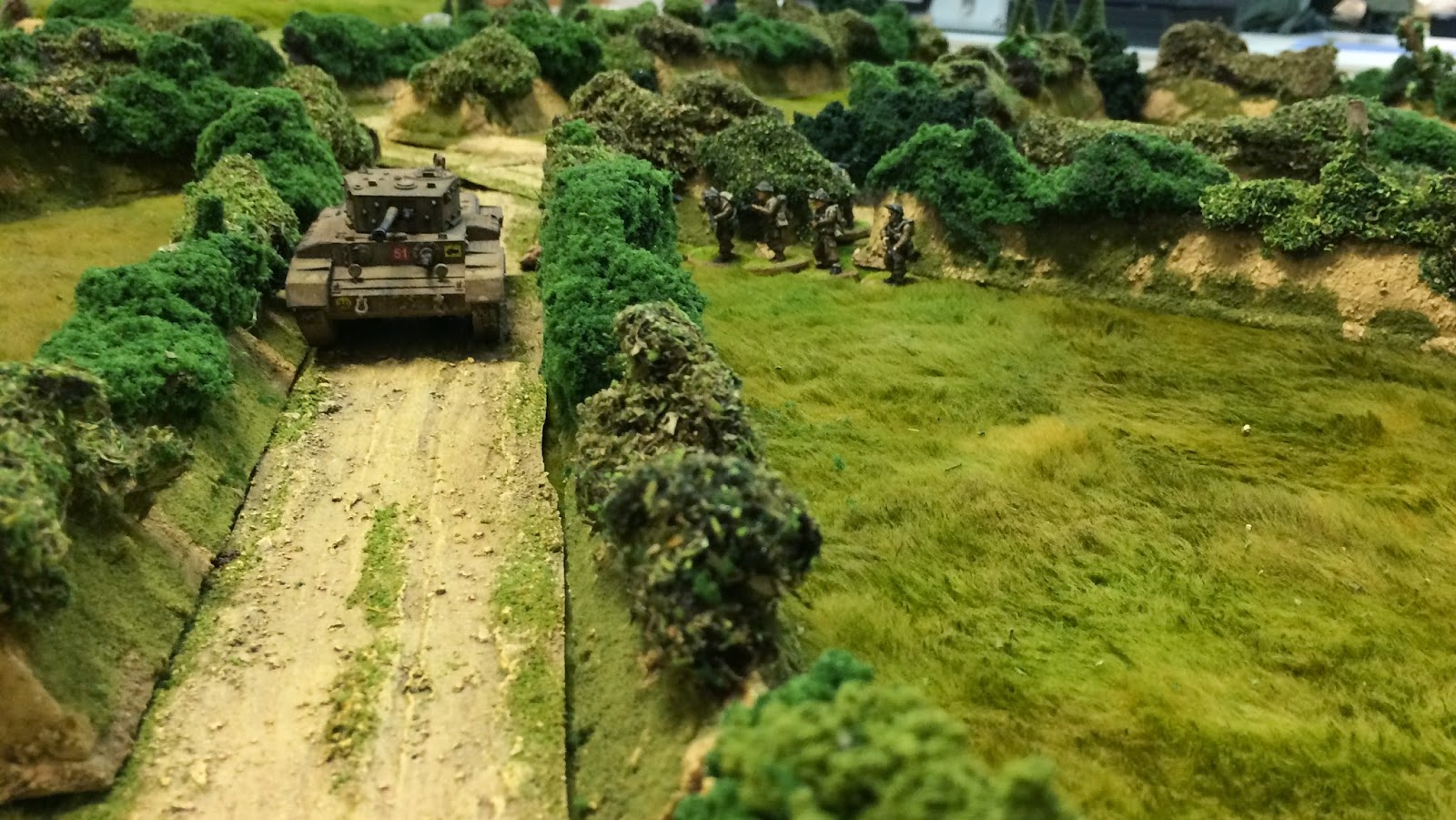 The deployment and the victory conditions are those of the “Scenario 2- The Probe” form the Chain of Command book: the defender must control an area 12” wide next to its tactical edge and must prevent that any enemy formed unit stay within that area at the end of its own phase.
The campaign materials do not include a specific drawing of the table but it provides  a general description:  “Terrain will be woods/ orchards, fields, bocage and the outskirts of the town (some buildings). Roads will be either dirt or cobblestone”.