From Empire To Revolution - The I World War in the East 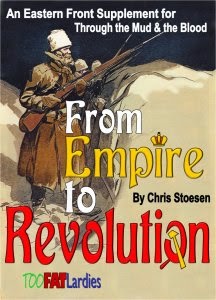 TooFatlardies has just released From Empire to Revolution, a supplement to its popular WWI rules set Through the Mud & the Blood for company-sized and skirmish actions. As usual by TFL, the book is available in pdf format from its website at the princely cost of GBP7.0

This 80-pages long book covers
I have just downloaded my copy and therefore did only have time to rapidly skip through it. But written by Chris Stoessen, a very familiar name already in the TFL circles and active blogger,is more than enough guarantee of quality to me.

Chris other works for Sharp Practice  in the American War of Independence or more recently "In the Name of Roma" for I Ain't Been Shot Mum and Chain of Command are thoroughly researched, solidly base on historical events, well written and this last publication, beautifully edited.

I really appreciate, on the one hand, that Chris has waded through this muddy and less well-known front of the Great war; and I hate him, on the other, because he's opening my appetite to engage again in the period (after a long absence!!)  and to start a new project, distracting me from my current endeavours (Spanish Civil War and WWII Chain of Command)
Publicado por Anibal Invictus en 20:09 6 comments: 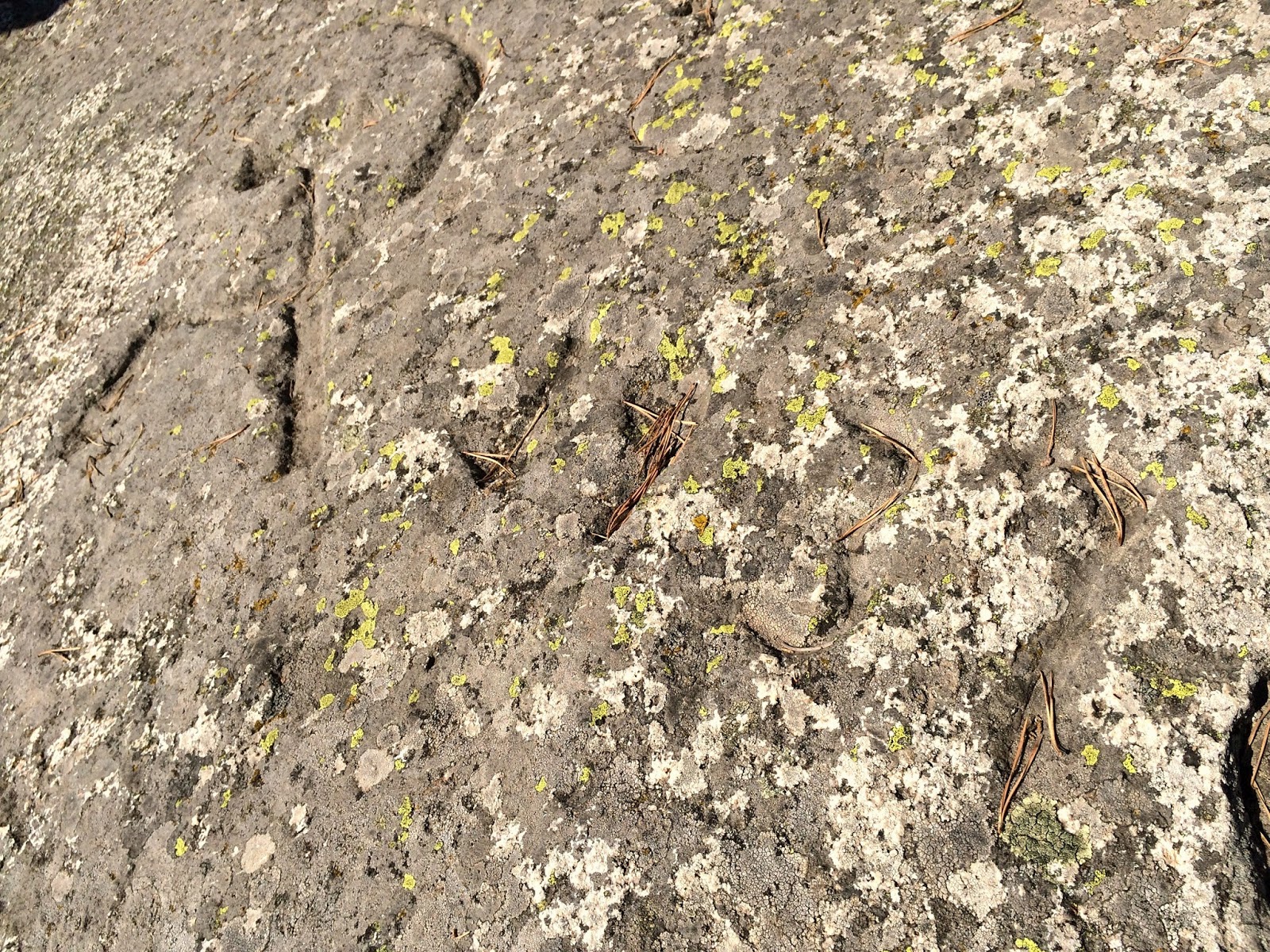 This a long due post from a second visit in August to El Alto del León, this time to see the Republican lines  (see here the post commenting the first visit to the Nationalists line in the same area). In the opening photo of this post you can see the communist symbol (hammer and sickle) followed by the incription "1937" that we found carved in stone next to a major resting area of the Republican line located at Peña del Cuervo. 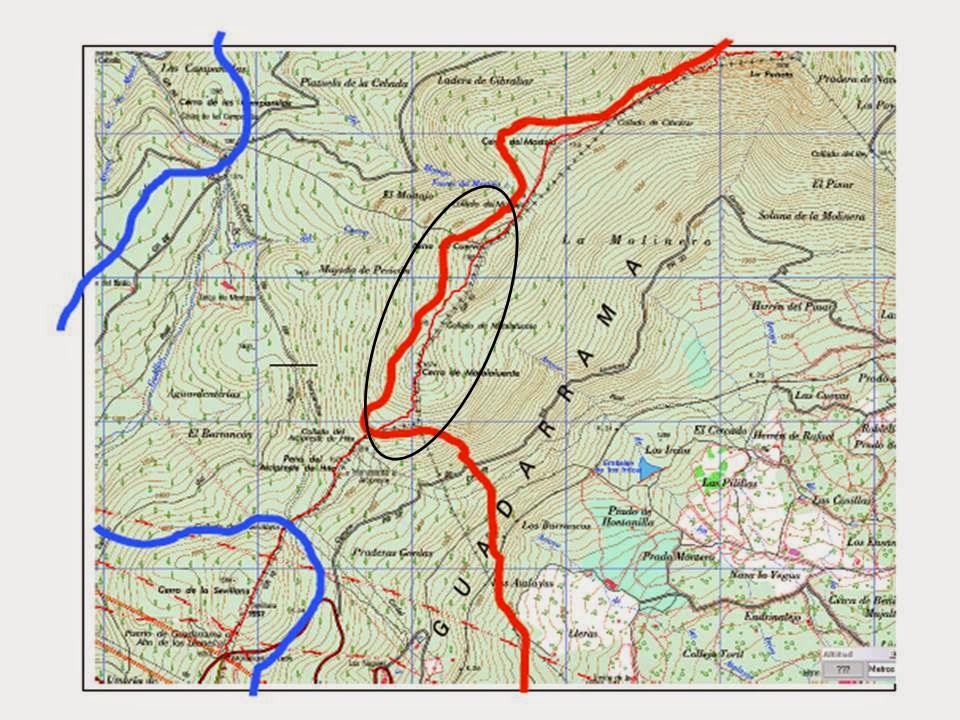 The map above shows the the battle-front lines, the Nationalists in blue and the Republicans in red; the black ellipse covers the focus of our visit. The map and many more interesting materials can be found in Domingo Pliego's blog, a veteran mountain trekker who has explored in detailed all the Guadarrama area. 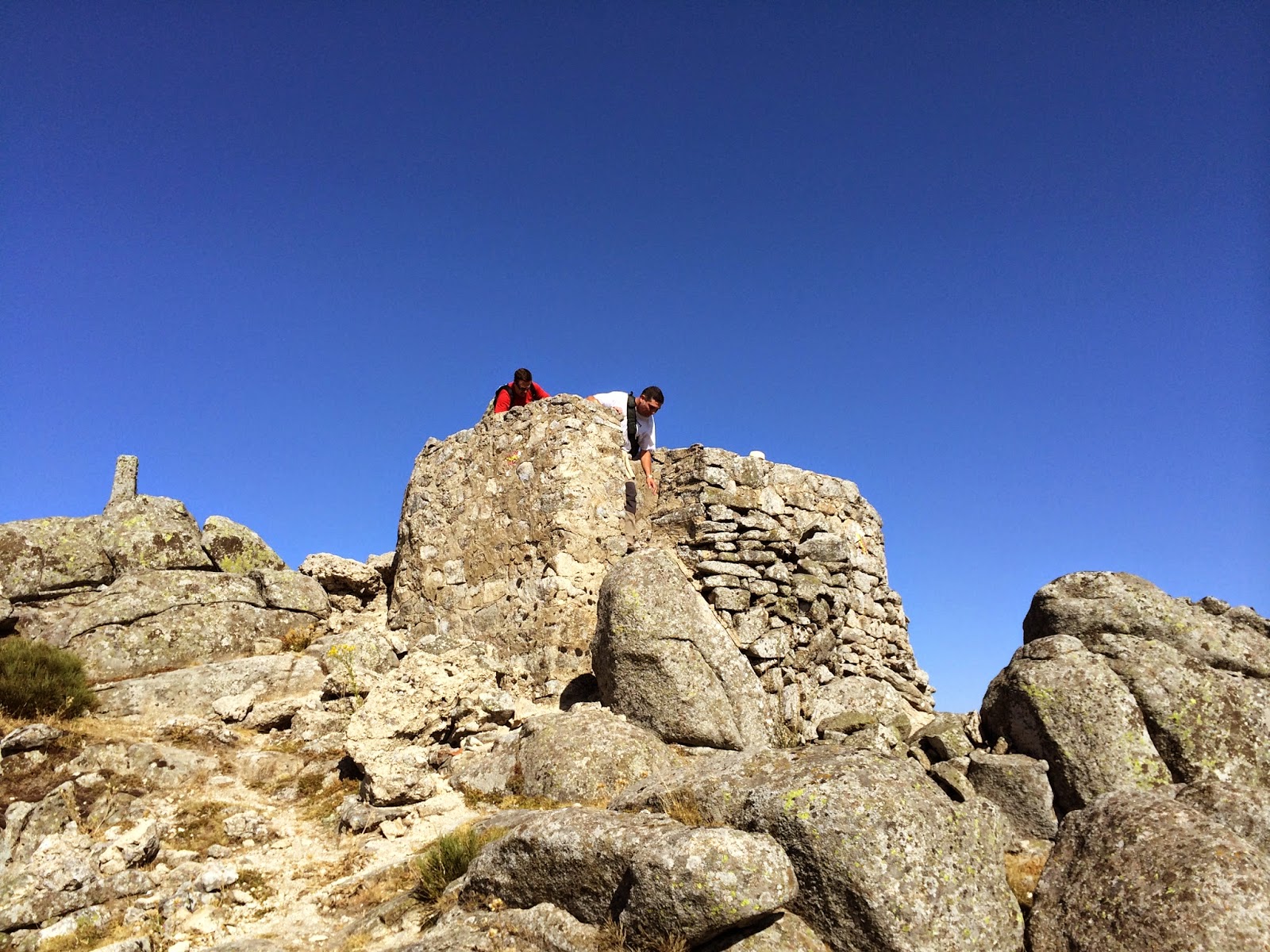 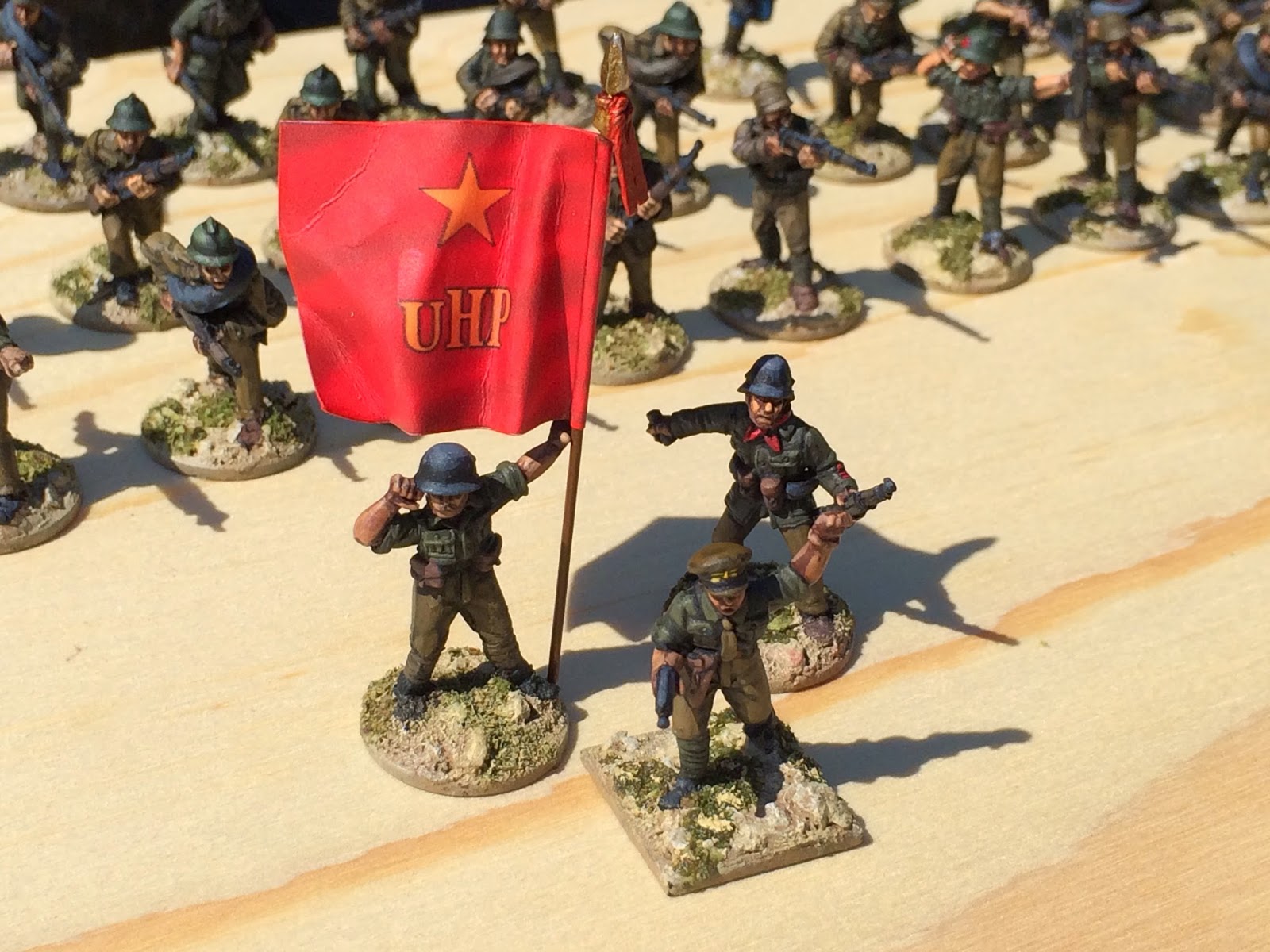 This is my second (and brief) post-holiday blog entry. I spent most of my painting time preparing the core nucleus of my Republican Army platoon for Chain of Command España. You have above the HQ section with an officer (Superior Junior Leader), a runner (with a flag) and a NCO (Sargeant).

The platoon has three sections:
I managed to paint the 2 full rifle sections (a total of 30 models))... 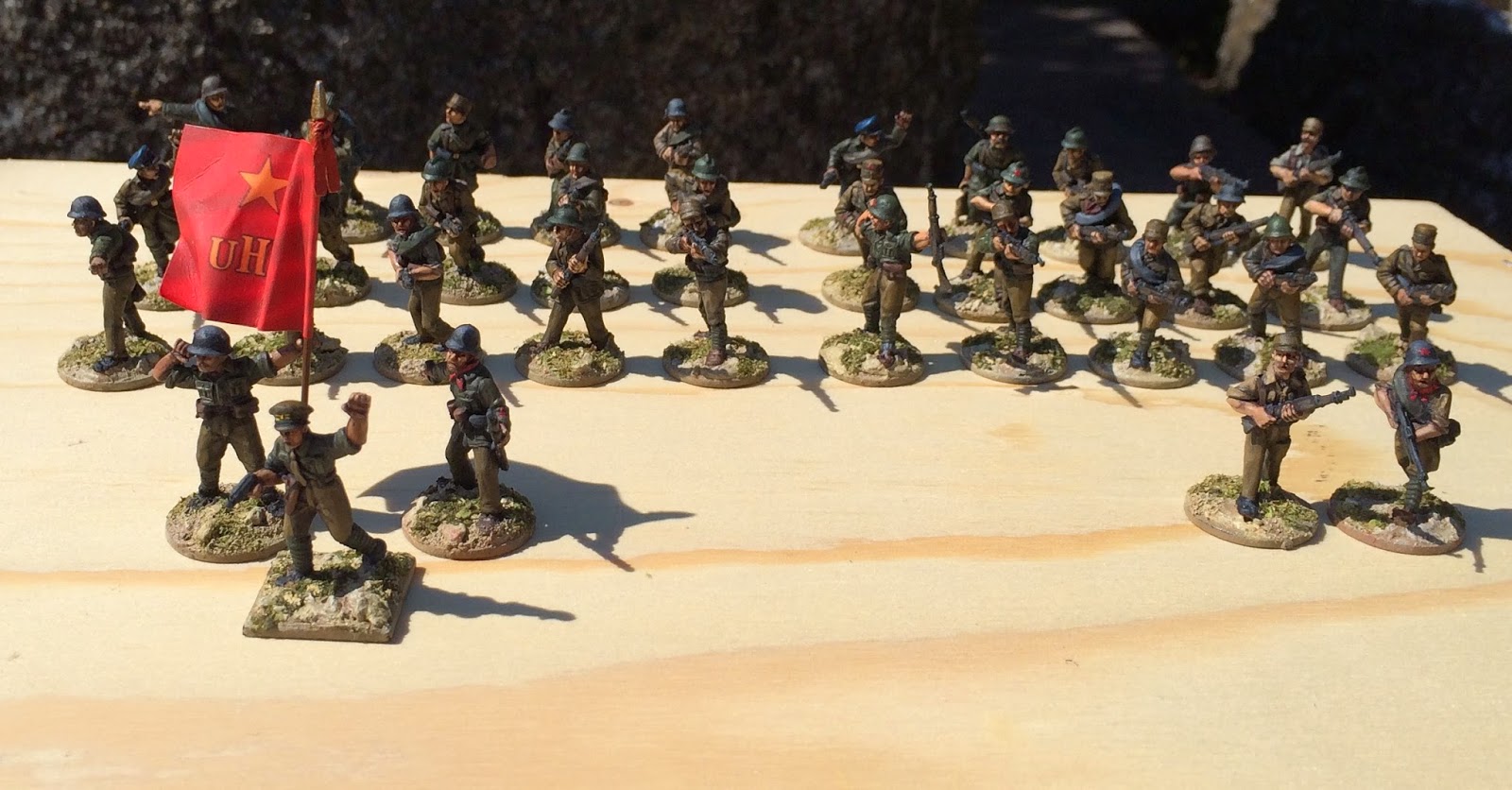 together with a couple of supports: an LMG team... 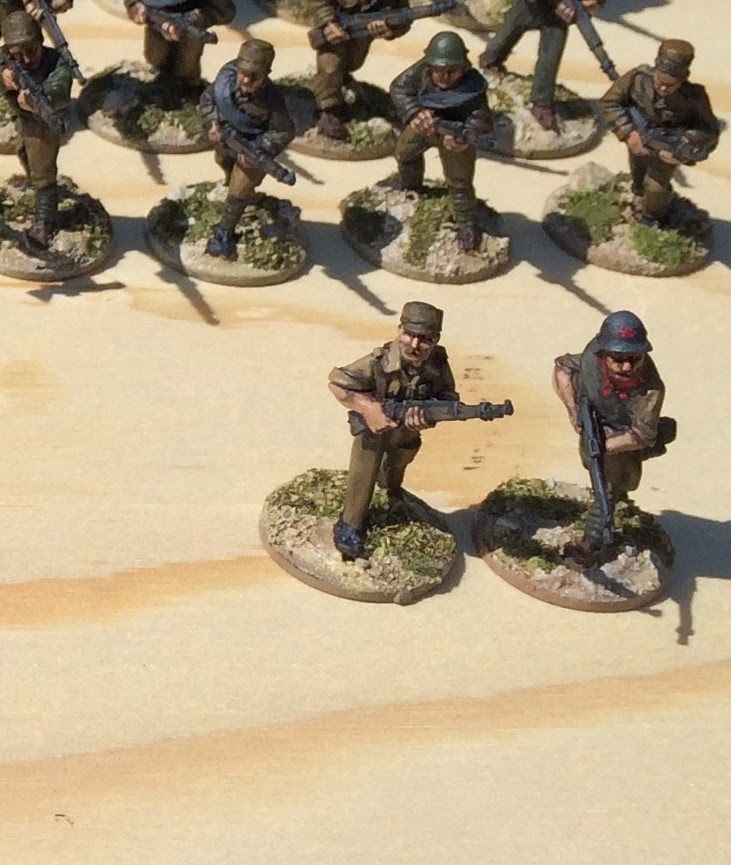 ... and a Russian-supplied 45mm AT Gun with crew 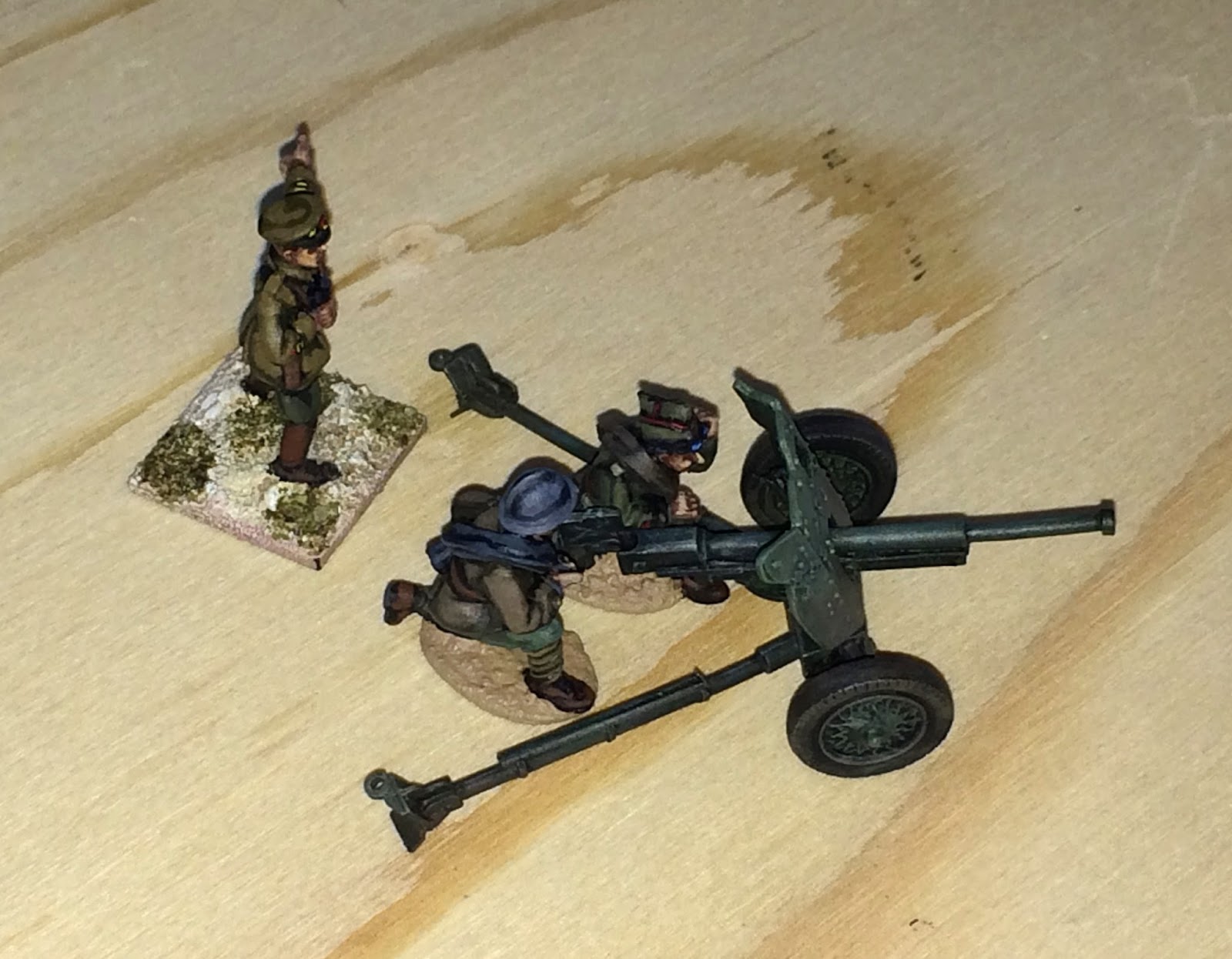 All figures are from the excellent albeit somewaht short in references, Empress Miniatures models (currently the only active supplier of 28mm models for this conflict).

On the painting desk still lie two light and one heavy mortar squads, one heavy machine gun and a few LMGs. I hope to make some progress on this through September, ready for the November campaign that we are planning. Note that I also have (for a later stage) a T 26, a Bilbao armoured car and a UNL wheeled armoured vehicle waiting in line.

NOTE: the flag showed in the photos is not a regular EPR model, but belonga to a 5th Regiment battalion; lacking a proper one I could not resist putting it there. The flag is from the superb Adolfo Ramos models range.

Non-stop to Madrid - A Chain of Command España Battle Report 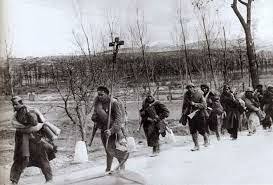 I’m back after a short 10-day break. As you’ll see over the next days, I’ve been all except idle having used this time to make a second visit to El Puerto del León (this time visiting the Republican lines), painted an initial batch of Spanish Civil War forces and even played with Chain of Command España.

This is the first post with the battle report of a game we played last weekend. The setting is the summer of 1936, where a column of Requetés (Carlists) Nationalists is confronted by a group of local Republican militias at a key cross road in a rural area. 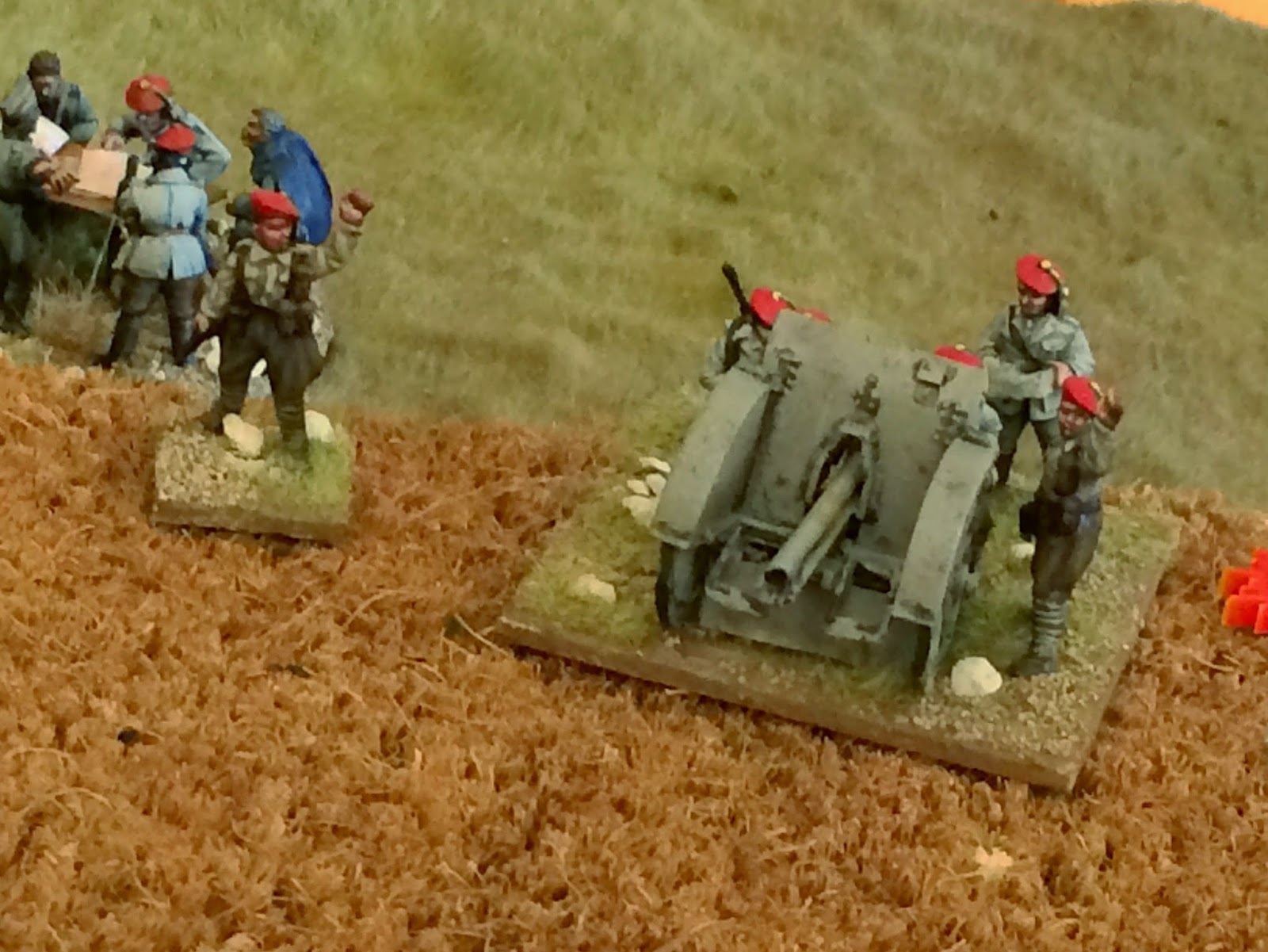