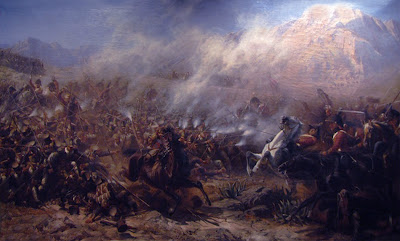 Background
The Battle of García Hernández took place on 23rd July, 1812 the day after the victory of Wellington at Salamanca.
The defeated French army left the battlefield covered by General Maximillien Foy’s 1st Infantry Division, a fresh French force as it did not have an active role in the main battle. Foy`s forces comprised two brigades with two regiments each and artillery.
Foy’s also got a light cavalry force reinforcement commanded b y General Jean-Baptiste Curto, with 2 squadrons of the 3rd Regiment d´Hussards, two squadrons of the 26th Regiment de Chasseurs and one squadron the 28th Regiment de Chasseurs.
According to French sources (but not mentioned in the British reports) the cavalry rearguard also comprised elements of the Division de Dragons commanded by General Pierre Boyér, in charge of protecting the artillery train retreating ahead in the north.
In the British side, Wellesley took personal command of pursuers, forming a group with the 1st Infantry Division, the Light Division, the light cavalry brigade of General Anson and the heavy cavalry brigade of General Von Bock (1st and 2nd  KGL Dragoons Regiments), the latter being part of the reserve division the previous day.
At dawn of July 23rd, both Anson and Von Bock initiated the persecution. 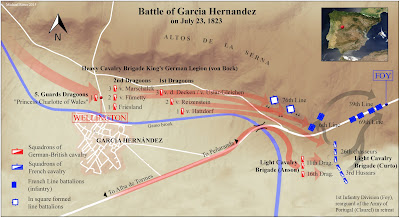 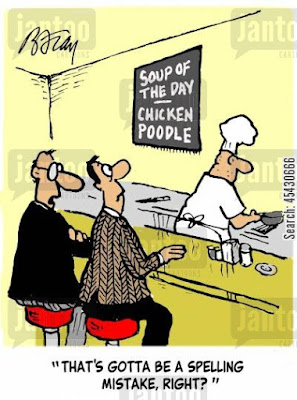 As you probably know, the 2016 TFL Summer Special released yesterday includes the full Corunna 1809 campaign for Sharp Practice that we´ve been designing, testing and playing over the last two months.

Alas, when I downloaded the issue, I discovered to my horror that my eagle eye failed to spot several mistakes in my latest revision of the article just before publishing. So here are the corrections in case you are interested in taking note:

Also worth noting that we introduced a British "Rifle Column" organisation in the artcile. But recently, we have realised that the brunt of the fighting was in fact undertaken by the light infantry with the support of Rifle companies distributed among the main British force.

Therefore, if you like a more historically accurate approach to the campaign, we would suggest using the Light Column Force of page 98 of the rules instead, as the backbone of the British forces for the campaign. 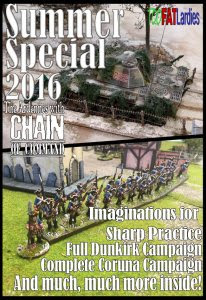 Just a quick note to let you know that biannual TooFatLardies Special (Summer edition) is out and full of gooddies for Sharp Practice and Chain of Command aficionados. It includes (unshame publicity) the full Corunna Retreat campaign designed and played by Club Dragón members of Madrid. As usual, incredible value for money at GBP 6.0 price. 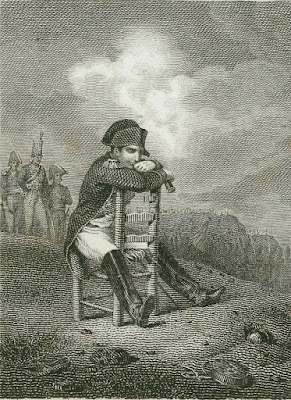 As mentioned in a previous email, the activity of the blog was likely to fall substantially as a result of the club's flooding and the difficulties now to gather to play a game. Nonetheless, we've been evereything but idle, and I have a couple of announcements to make:

The first is that I played a small game last Friday at a friend's house and I'm planning to publish the scenario sometime this week. The game is in the aftermath of the Salamanca Battle (1812), when the rearguard of the routing French decided to take a stand against the pursuing British cavalry near the village of García Hernández.

The second is that the full Corunna Retreat campaign will soon be published, this time in the TooFatLardies 2016 Summer Special to be released in a few days from now. There you'll find all the details and special rules to play the campaign whose AARs I've been posting over the last two months.

So no dead but alive despite my low presence here. Stay tunned.

Some of you may have noticed that I have changed the design of the blog.
I used to have darker colours on the back (greys and blacks) and light colours for the text.

Well, juts to inform you that this was not  my intention and actually I DO NOT LIKE at all the new design. But the bloody blogger suddenly change automatically the colour of the post titles to blue and the colour of the links to a kind of scarlet and I haven't found the way to revert to my original palette.

For this reason, I was forced to change the background colours to lighter tones, because in my original (and long-time) used layout it was impossible to read some of the texts. I'm still trying to figure out what the hell happened with the blog and looking to revert to my previous design. In the meantime, please bear with it.