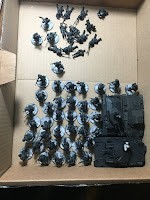 This year I decided to focus my effort in building an early II World War German Army for the Blitzkrieg period. The reason for this is twofold: on the one hand, TooFatLardies released this year the first major supplement for Chain of Command centred around the France 40 campaign. The follow up videos uploaded to its YouTube official channel with Richard Clarke and Nick Skinner playing a few of the campaign games only light my desire.
Read more »
Publicado por Anibal Invictus en 20:26 6 comments: