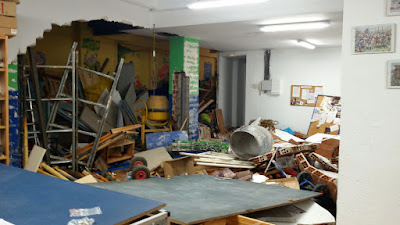 Yesterday disaster struck at our beloved club premises: a pipe of the Madrid water utility broke, flooded the underground property next to ours, and the wall dividing both premises busted as a result of the water pressure and the tons of building materials stored there.

Literally a tsunami swept all our club and the water height reached over 30cm, flooding the lockers where many of us store our gaming toys. I have come out of the disaster with very light casualties as I use to keep my models in plastic boxes, only loosing some self-made scenery I used in my games.

But some of my club mates here were collectors of tabletop games and literally I saw then shedding tears when they open the lockers and all that was left were a mass of wet board. Some have lost several hundred euros in games and many are irreplaceable, belonging to the collectors category (old Avalon Hill, Victory Games, etc from the 70s and 80s... I did a quick search in Ebay and found one of the games being sold for US$300).

The level of destruction is such that we are unlikely to return to normal before October or November. Which on the other hand it's going to have an impact here too, as most of my blog posts deal with the games I usually play on Sundays.

Therefore, if you see a drop of activity it's not as a result of me losing interest in blogging, but because of what I just explained. As said, you can still follow my activities in my Twitter account and I'll keep posting and updating with any news as they come out. 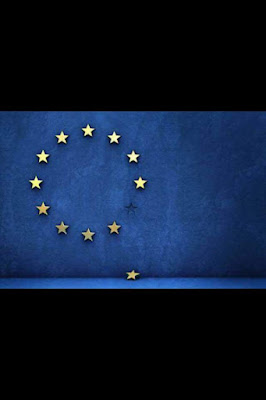 It is a democratic decision. I do not share but must respect.
Fear that this is just the beginning 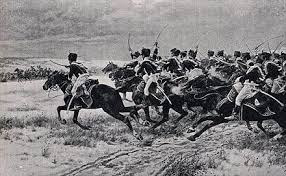 The final game of the Corunna Retreat campaign for Sharp Practice was put to test today. In this scenario, we saw the British crossing a major obstacle (the Nerea river at Constantin) with the French in hot pursue. The full campaign will be published in the cinoming TFL Summer Special 2016.
To achieve a victory, the British had to cross the only passable point (a bridge) with at least a 75% of its forces (equal to 48 models with the OBs used). The British forces started the game fully deployed on the south bank of the river.
The initial French forces were off table, but only the cavalry contingent was available in the first few, reflecting the scattered situation of the French column. After each Tiffin card, the French player rolls a D6 dice and if the result is equal or less than the turn number, the infantry command cards are then added to the deck. 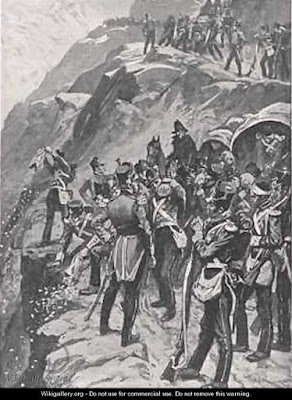 Today we playtested the third scenario of the Corunna campaign for Sharp Practice. That we expect to publish in the incoming Summer Special 2016 In this case, it was inspired on the events of January 6th 1809 (Epiphany Day) when, having lagged the main army column, the paymaster's cart bullocks died and the army's silver was in danger of falling in French hands. General Paget had to retrace back all the way to where the carts were stranded and ordered the money chests to be thrown over the nearby cliff.
The game is played across the longest edge of the table. The table is actually a straight road with several terrain features offering light cover to the units, the number of items randomly calculated and placed. The British stranded cart at a certain distance of its tactical edge based on a die throw; and its deployment point at 12” from the cart. The French enter through their tactical edge, the deployment point located on the road.
The British must empty the cart and throw the money over the cliff. This is accomplished as a task with 16 points (see chapter 10 of the Sharp Practice book) undertaken by a brigade of men under the command  of a level I leader. They can start moving the money from the cart after the 3rd Tiffin card is out.
Read more »
Publicado por Anibal Invictus en 17:44 3 comments: