For once, I haven´t played Chain ofCommand… at least Second World War :-)
Today I have played for the first time Fighting Season, the incoming rules for Modern Warfare by TooFatLardies. Our gaming group signed for the play testing a couple of months ago but only today we have been able to put a more or less decent table (with houses, walls and fully painted minis...) to play the rules.
This is a full brand new and self standing set of rules, not just a Chain of Command with some adaptations; therefore,  those familiar with the Second World War rules won’t have (I least I didn´t have) much problem in mastering the game. However, from the tactical point of view there’s very little resemblance between the two sets.
The approach taken by the designers (Richard Clarke and military historian & wargamer Leigh Neville)  was to go from bottom up and in a full Lardista style, study the key drivers of the small/skirmish combats in Iraq and Afghanistan and then develop the rules.

In this sense, the rules include full new terrain features typical of the area of combat (irrigation ditches, crop fields, flat roofs in the compounds’ houses…) in addition of course to the very different weaponry. Each army participating in this conflict has its own specific chapter (not just OOBs and supports) to enable a reasonable simulation of their intrinsic fighting conditions and tactics. 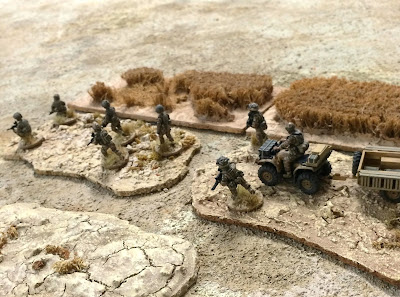 In that sense, for example, the same terrain feature (for example, climbing a hill) affects in a total different way to the Taliban (who can move freely due to its better knowledge of the geography) than to  the coalition forces (being broken ground due to the burden of weight carried by the modern soldier).
Read more »
Publicado por Anibal Invictus en 20:54 12 comments: