Bloody November: A Chain of of Command España Campaign in Madrid 1936 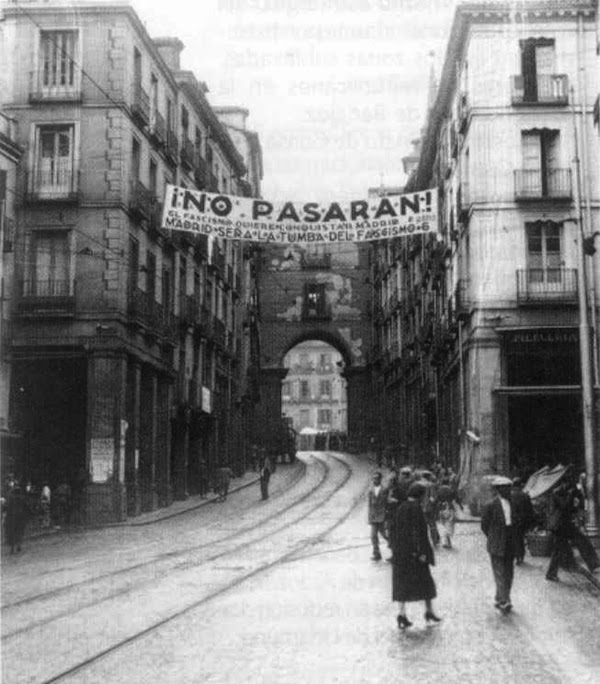 Introduction
After the failed previous July coup, Franco’s colonial troops in North Africa had reached the outskirts of Spain’s capital city by early November 1936, in an unstoppable drive, overcoming without contempt all armed opposition found on their way up from Sevilla.


The Republican Government has shamelessly left to Valencia with the enemy at the gates, escaping at night and without notice. But just before leaving, it appointed the dull and grey General Miaja commander of the garrison defending the city.


However the orders left to him in a closed envelope at the War Ministry office, opened during the early hours of November 6th, made it clear that the Government lacked any hope of the city surviving the Nationalist steamroller, suggesting instead to put a token resistance at best and then to pull back with the garrison remnants towards a new defensive line on the road leading to Valencia.


But miracles exist, and against all odds the city resisted the attacks of the rebel columns. The milicianos surprisingly (and unexpectedly) put up a fierce fight in the southern suburbs of Madrid.
In the left flank, a Nationalist column was expected to take La Casa de Campo, a popular natural park west of Madrid and across the Manzanares, used by the madrileños to shelter from the hot summer afternoons and to picnic on the bank of its famous artificial lagoon during weekends.
The attack was launched in the early hours of November 8th but quickly petered out, although not before conquering a dominant hill within the park called Cerro Garabitas. This elevation will allow the Nationalists observers to direct the guns and to merciless pound the central area of Madrid over the next years.
However, the failure to enter Madrid in this first push also represented for the Republicans a much needed infusion of moral and the cry of ¡No pasarán!  now reverberated across the city and Miaja unexpectedly became the people’s hero and the symbol of the resistance like Petain in Verdun during the Great War.

The following days saw renewed Nationalists efforts and much hand-to-hand fighting among the trees of Casa de Campo woods until on November 13th they finally reached the river Manzanares.
They now were in control of a 500 meters strip along the river's west bank, extending from El Puente (bridge) de los Franceses and Puente Nuevo on the right, to the crossing overlooking La Ciudad Universitaria (the University District) on the extreme left.
On the 15th General Varela ordered Asensio to take these bridges and to move into Madrid, allocating a squad of Pz Is, also called negrillos due to its dark grey panzer colour, to provide more weight to the attack.

Asensio’s “tomorrow I’ll cross the river, with or without tanks” answer to Varela was taken in literal terms: another bloody fight developed attempting to land at the other side of the Manzanares and break the Republican defensive system; although only knee depth most of the tanks got bogged down in the muddy river banks. And a couple of negrillos that eventually crossed the Puente Nuevo, were later on surrendered after becoming isolated following the demolition of the bridge by the Republican engineers.
However, it was early to call a Republican victory. The forces in Madrid were hardly more than a bunch of militia units, still great distance away of being true military concerns, suffering from a scarcity of modern weapons and effective leaders despite the increasingly noticeable supplies from the Soviet Union, specially planes and tanks.
On the Nationalists side the rate of expenditure of the African veterans was starting to make a dent in their efficiency and moral. Lacking enough men to push the attack through various fronts, General Varela decided to focus now all efforts on the left flank crossing the Manzanares at the Parque del Oeste-Coudad Universitaria line with three of its available columns while making some diversionary attacks in the southern Madrid districts.
A decisive week for the survival of the Spanish Republic is about to start...

The Campaign
This an ambitious campaign designed to be played with  Chain of Command (CoC), the TooFatlardies highly successful skirmish combat rules in a Second World War environment. This campiagn combines the three main companion CoC supplements published so far:


The campaign follows the At the Sharp End’s original ladder system where you can follow the exploits of your forces through a series of interlinked games. This is an abbreviated full map campaign setup around the attack through the University District (Ciudad Universitaria) during the dramatic and decisive days between November 15th and 19th 1936. The ladder is made of five rungs, as follows:

The Soviet Union and Stalin will unlikely look for a head-to-head confrontation with the main European powers and will force a negotiated (or not) surrender of the Republican Government. Spanish and other international communists will be saved and sent to Russia and will again fight against the fascists in 1941 among the ranks of the Red Army... but that’s another story.

Terrain Notes
We provide both a contemporary map and graphic illustration of the terrain where the actual fight took place to help players in deigning their game tables. Nonetheless, these are some (hopefully) useful guides on how we think it may better look:
Scenario 1:  Casa de Campo is a large wooded park in the outskirts of Madrid. The terrain is mostly flat with some smooth elevations that may block LOS and scattered trees (mostly pines); as the date is November, it is in the middle of the rainy season, so most likely will be intersected with small water streams and muddy areas. Rocky craggy formations and low stone walls here and there can provide some useful hard cover to the squads deployed.
Scenario  2: The Manzanares river marks the limit between Casa de Campo and the Madrid  urban area. Note that Casa de Campo is surrounded by a fairly high brick and masonry wall that will have to be demolished before crossing (historically several gaps were blown with explosives to allow the Nationalists Panzer Is to attack the Republican positions)
The terrain between the river bank and this wall should offer little cover to the attacker, presenting a light slope towards the river.
Scenario 3: The Manzanares is a very narrow river just a few meters wide and in the drought summer season run almost dry. However, according to battle reports, the banks and the river bed were in that mid November date fairly muddy, contributing to bog most of the tank force supporting the Asensio column. At the crossing, the Regulares had the water at knee level only but they were hampered by the slippery mud and bank slopes. Historically, the main bridge (Puente Nuevo) was blown and the rail bridge (Puente de los Franceses) was impassable for infantry who would be dead ducks if attempting to cross.
Scenario 4:  The Ciudad Universitaria was the University District of Madrid built in the early 30s. By the time of battle it has not been fully developed. The area had several large multi-storey buildings connected with wide roads and became during the battle almost a small “Stalingrad”: to game this scenario you can use large half-ruined buildings surrounded with debris, shell craters, walls, barricades, even some destroyed tram model or remnants of vehicles etc.

Scenario 5: The Faculty of Medicine was one of the largest building compounds of the university deep in the end of the Madrid University campus, flanked by the Veterinary and the Odontology Faculties buildings. The fight for the control of this building may involve floor to floor close combats as well as room to room, floor to floor melees; like an Stalingrad in miniature, this is the place where the bayonet and the hand grenade reigns. 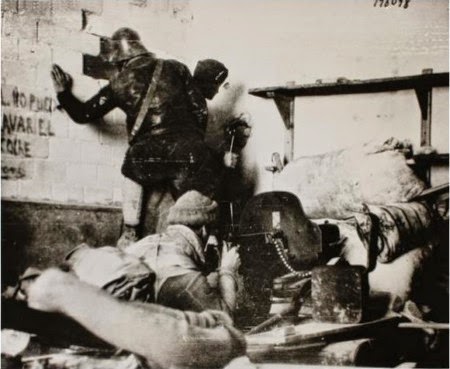 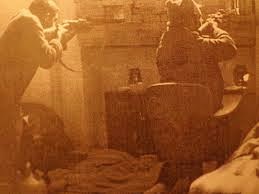 Opposing Forces
The Nationalist forces will be elements of the Columna 1 commanded by the Teniente Coronel Asensio. This will comprise 1 platoon each of the Primer (first) and Tercer (third) Tabor de Regulares de Tetuán and a platoon of the Sexta (sixth) Bandera del Tercio de la Legión. 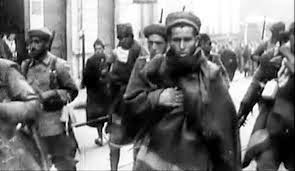 The Republican forces will include elements of the Comandante Romero column (communist), Columna Libertad (anarchist) commanded by Durruti and the International Bon Edgard André. 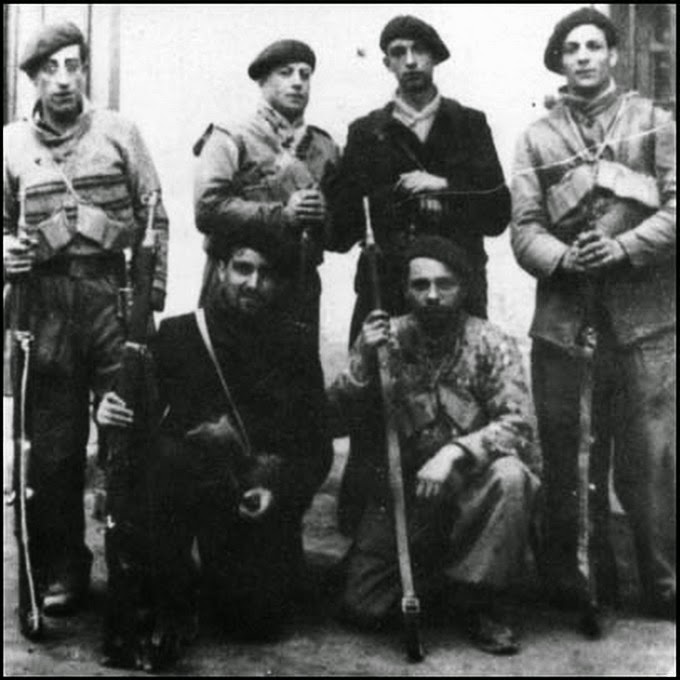 Each force will be organised as per the Chain of Command España lists with the supports; on the Republican side, note that the Comandante Romero forces will use the 5th Regiment while the Columna Libertad he People’s Militia lists respectively.


Campaign Special Instructions
The campaign is designed to be played by up to 3 players per side, commanding each of the platoons described.
Each side must appoint a supreme commander for the campaign, who will plan the orbat for each scenario and will distribute reinforcements according to the assessment of the general situation of his side.
In each game a maximum of two platoons could be deployed by each side.
All rules pertaining force morale, etc contained in Big Chain of Command apply.
We suggest playing on two different but adjoining tables of standard size, with 1 friendly and 1 enemy platoon in each. The table delimits the area of influence of the platoon commander and the boundaries must be respected and never breached. Boundaries must be clearly marked
Players in each side are absolutely forbidden to talk or pass information to each other by any mean once the game begins. The actions of his respective commands are independent from each other.
However, and at the cost of two Chain of Command Dice, any side can declare the boundaries eliminated and move/fire/ attack to enemies in the adjacent area. It is in that moment that Big CoC force moral rules apply.


Starting the game
The above text should provide all the needed materials to start playing the campaign, and I hope you find it useful. Nevertheless, feel free to contact me leaving comments here, at my email (gce.mail33@gmail,com) and  at the TooFatLardies Yahoo Group. I'm also a regular participant in the most active wargames forum in Spain La Armada beign an unofficial caretaker of those threads dealing with TooFatLardies sets.
We will highly appreciate your comments, critics  and suggestions on this campaign.
In my next post I will write the after action report of the first game of the campaign fought in Club Dragón last weekend. 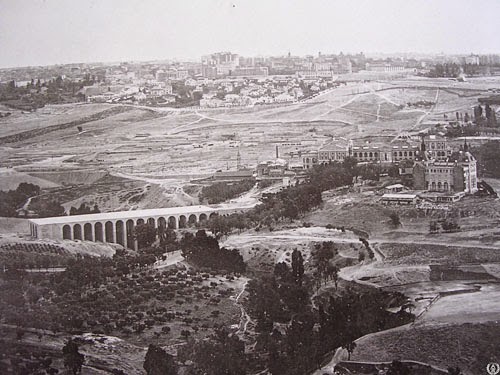