When Bravura is not Enough - A Big Coc Battle Report


Today marked my return to the battlefields after a long spell since mid-August. My gaming mates had been intensively testing Big Chain of Command mixing infantry and armoured units over the past weeks and it was time for me to catch up.

Our initial intention was to play a Normandy battle, but the late-minute absence (due to a family incident, thank God not serious) of the Fallschimjager platoon commander forced us to change on the spot to a North African scenario, as we had most of our stock of models in the club. 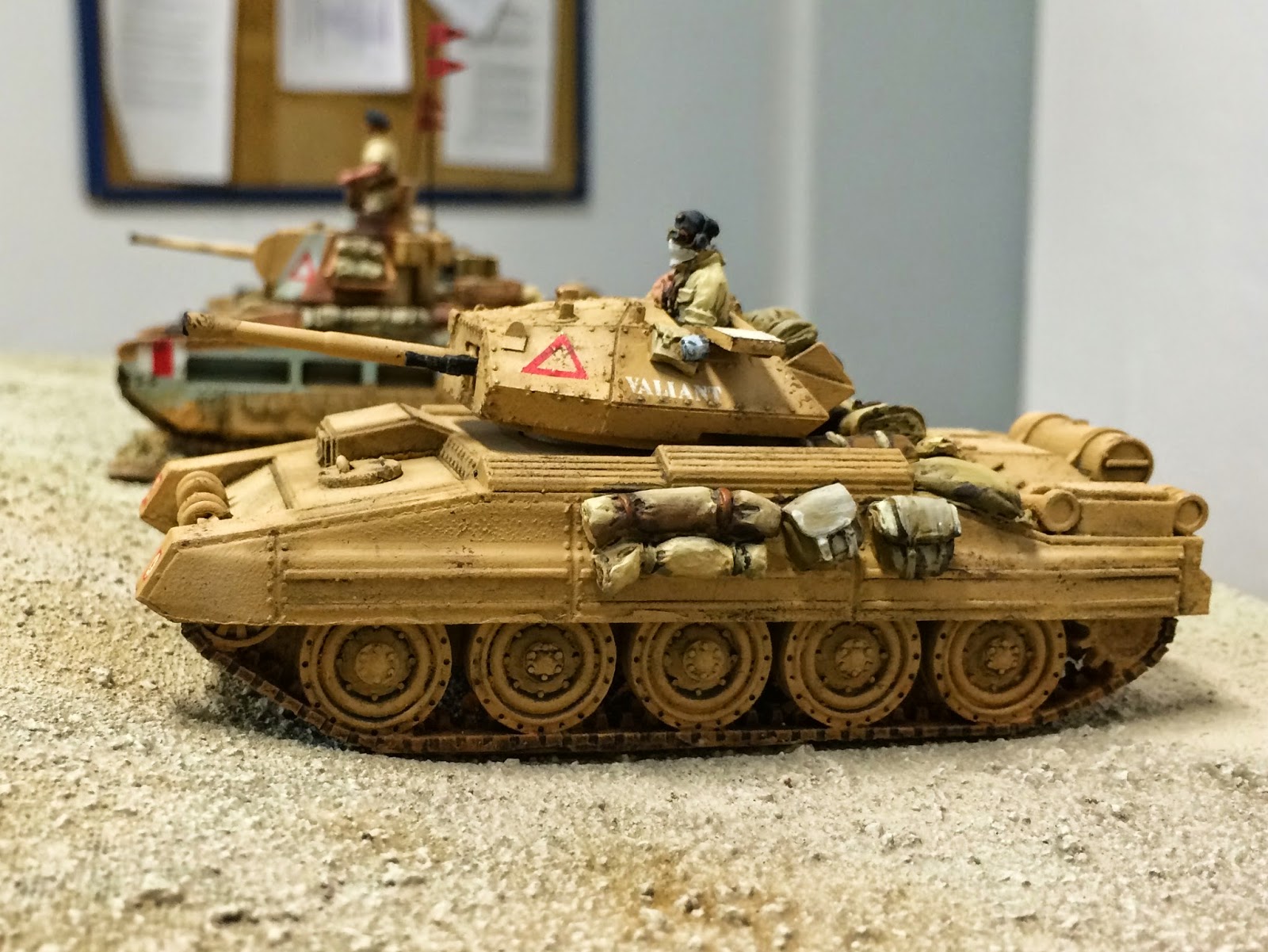 In this game, an Italian infantry platoon and a troop of tanks (3 x M13) were  ordered to retake an oasis recently conquered by forces of the 4th Indian Division; the Empire forces also received the support of a tank troop of Matildas. We used the “Attack & Defend” scenario 3 conditions of the Chain of Command book for this game. 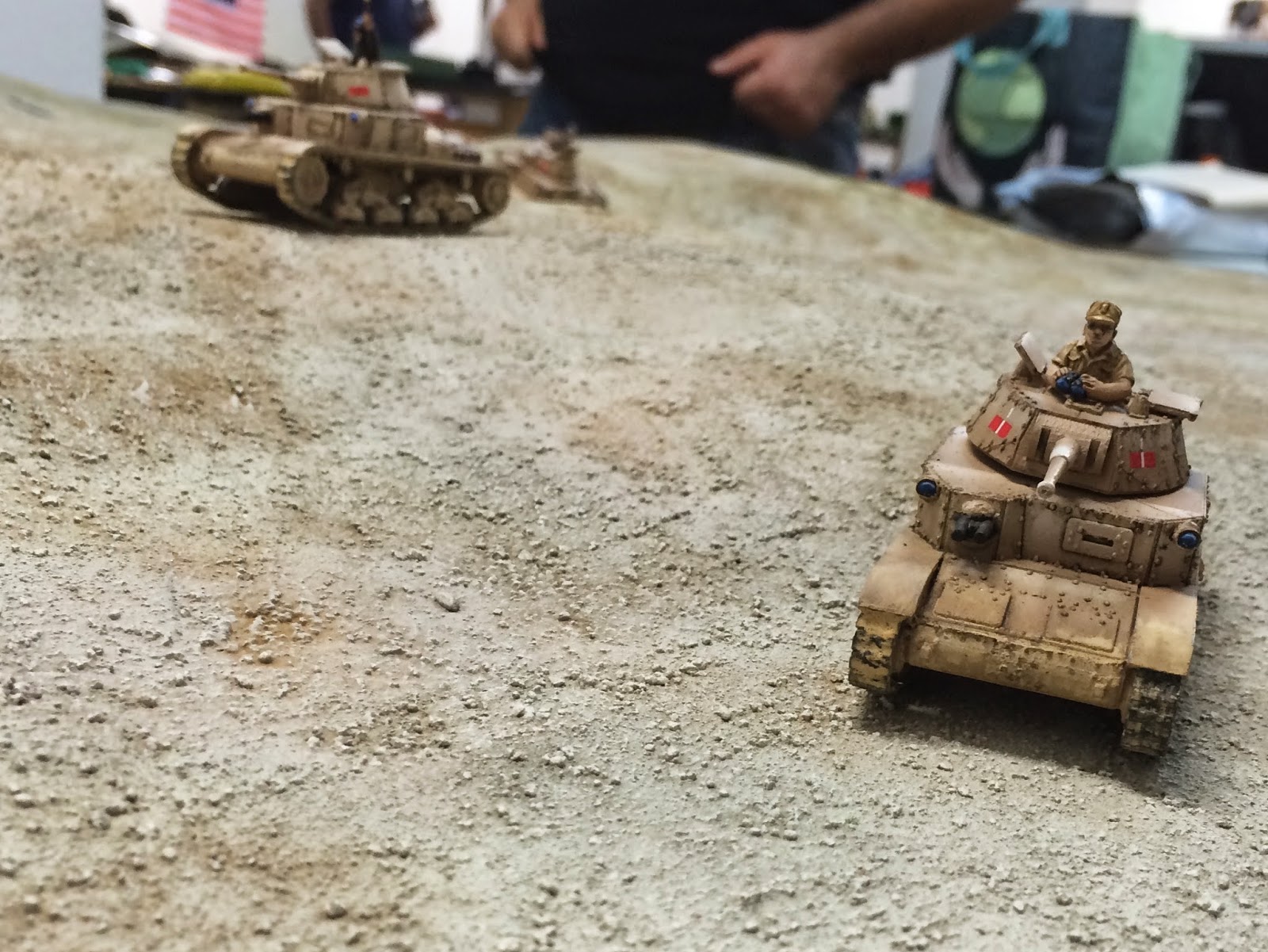 In the patrol phase, the Indian markers  started within 18” of the edge of the table around the oasis (cluster of palms in the photo below). The Italians made an aggressive attempt to bring forward the jump-off line, effectively parried by the Indians. The final position of the jumpoff points is illustrated in the photo below, all located behind some ridges and sand dunes offering protection and out of LOS of the respective enemies, not clearly seen in the photo. 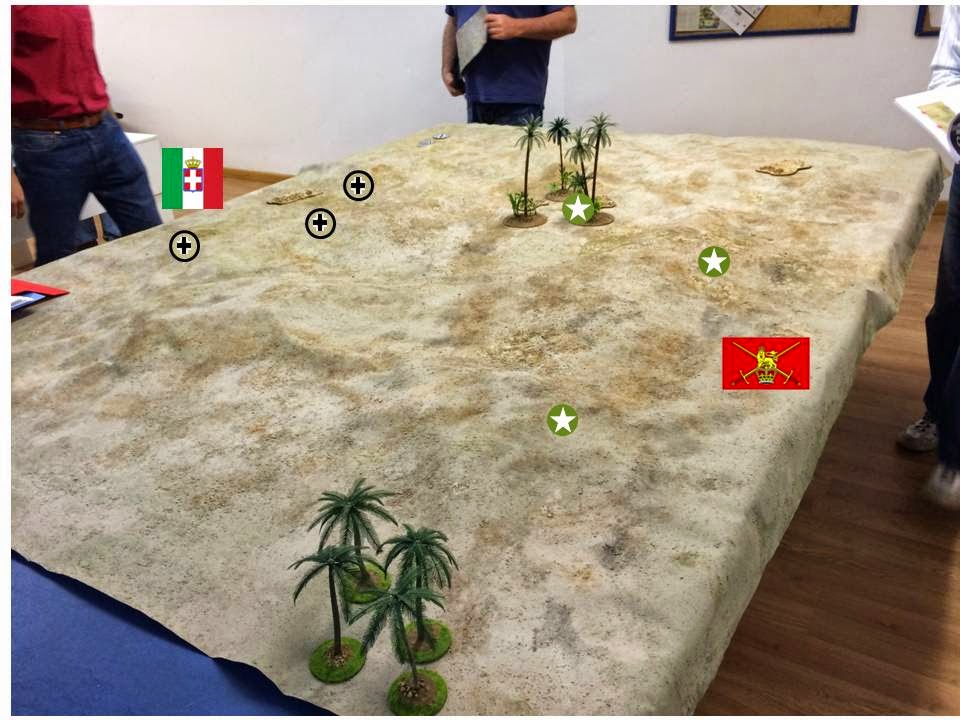 I was the commander of the Indian infantry and decided to put two jump-off points in the oasis area and the third slightly far to my left, to protect my flank in case the Italians attempted to bypass my main defensive position .

The game started with a first Italian section deploying on the ridge overlooking the oasis, with the two LMG teams in overwatch and the rifle team behind and under cover. In the same phase, the Italian tanks emerged on the right side of my line. 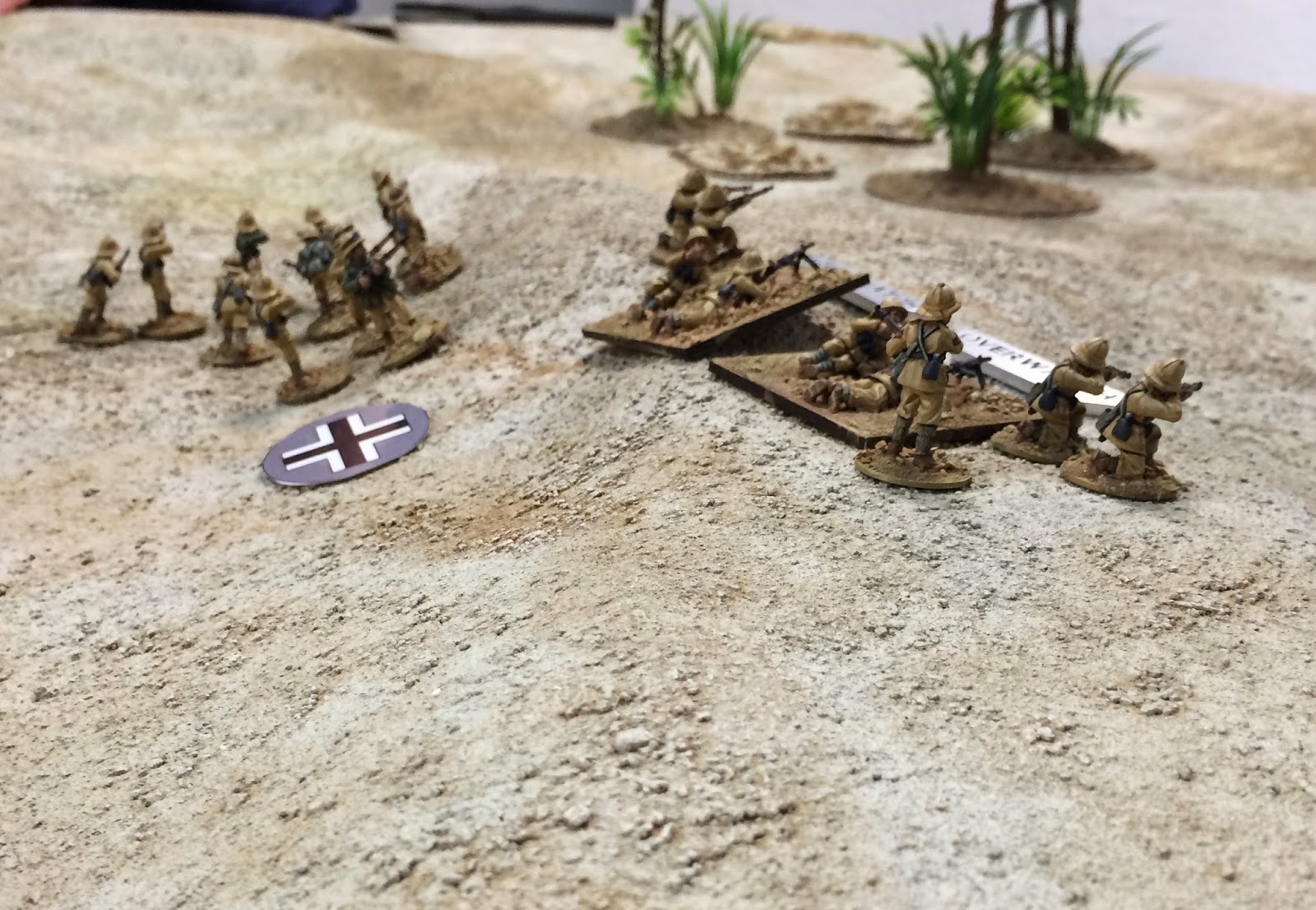 In our first activation I deployed my first infantry section in the oasis firing (quite ineffectively) on the Italian LMG, who responded back (being in overwatch) causing the first casualties and shocks to the Indians. 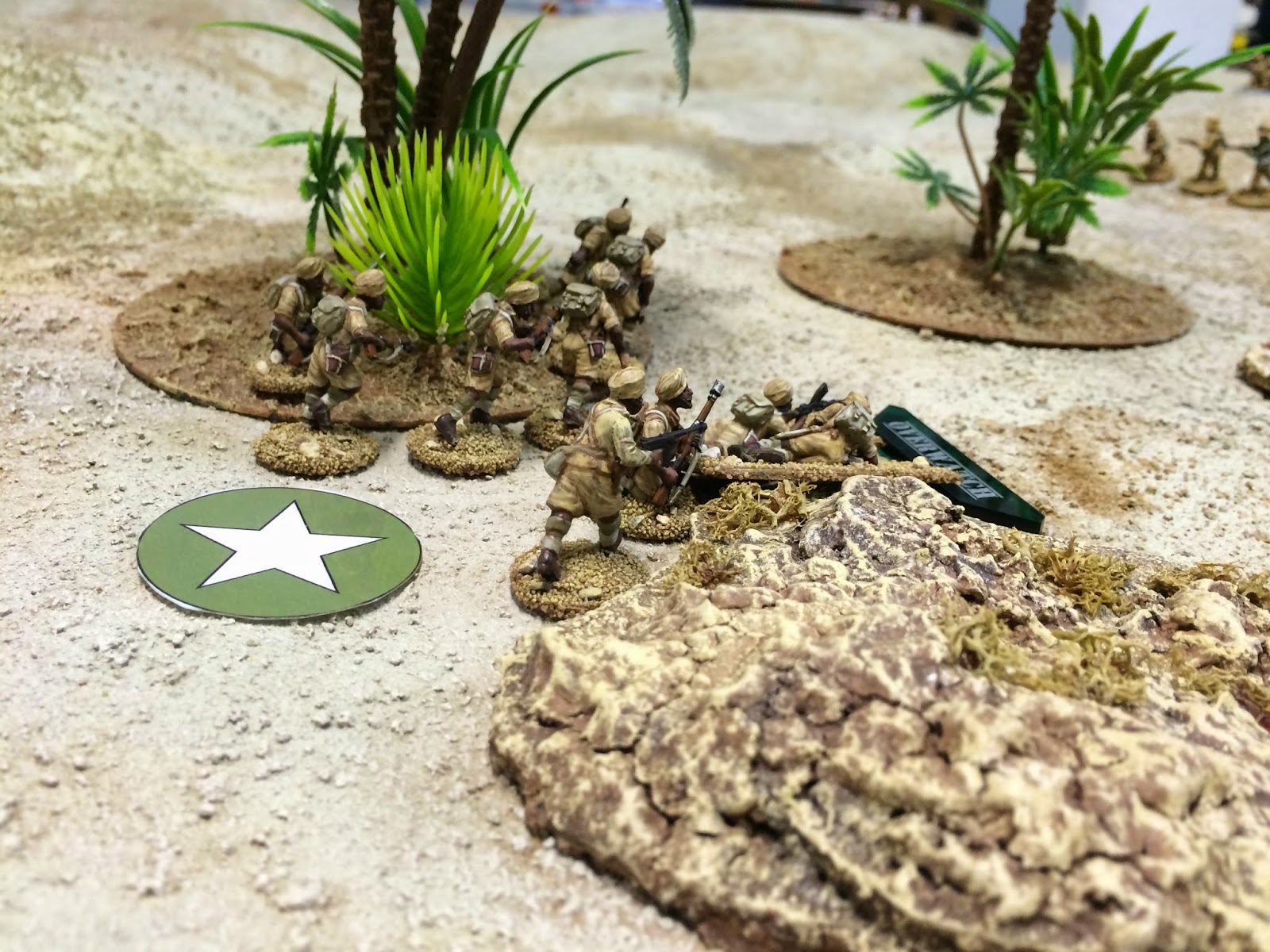 The second Italian activation caused additional casualties to the rifle team who was forced to pull back and find cover among the oasis palms and vegetation, facilitating a jump of the Italian rifle team towards its objective. 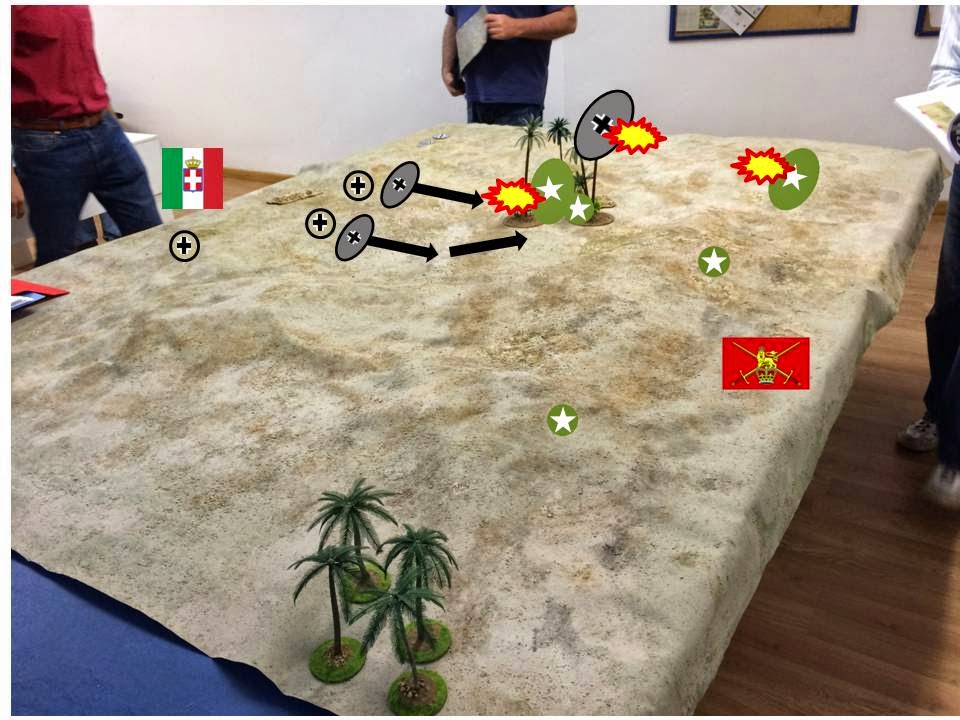 I brought into play my support element (a Mark VI AFV armed with a HMG) but again the fire was quite ineffective and hardly made a dent on the brave Italian rifles. 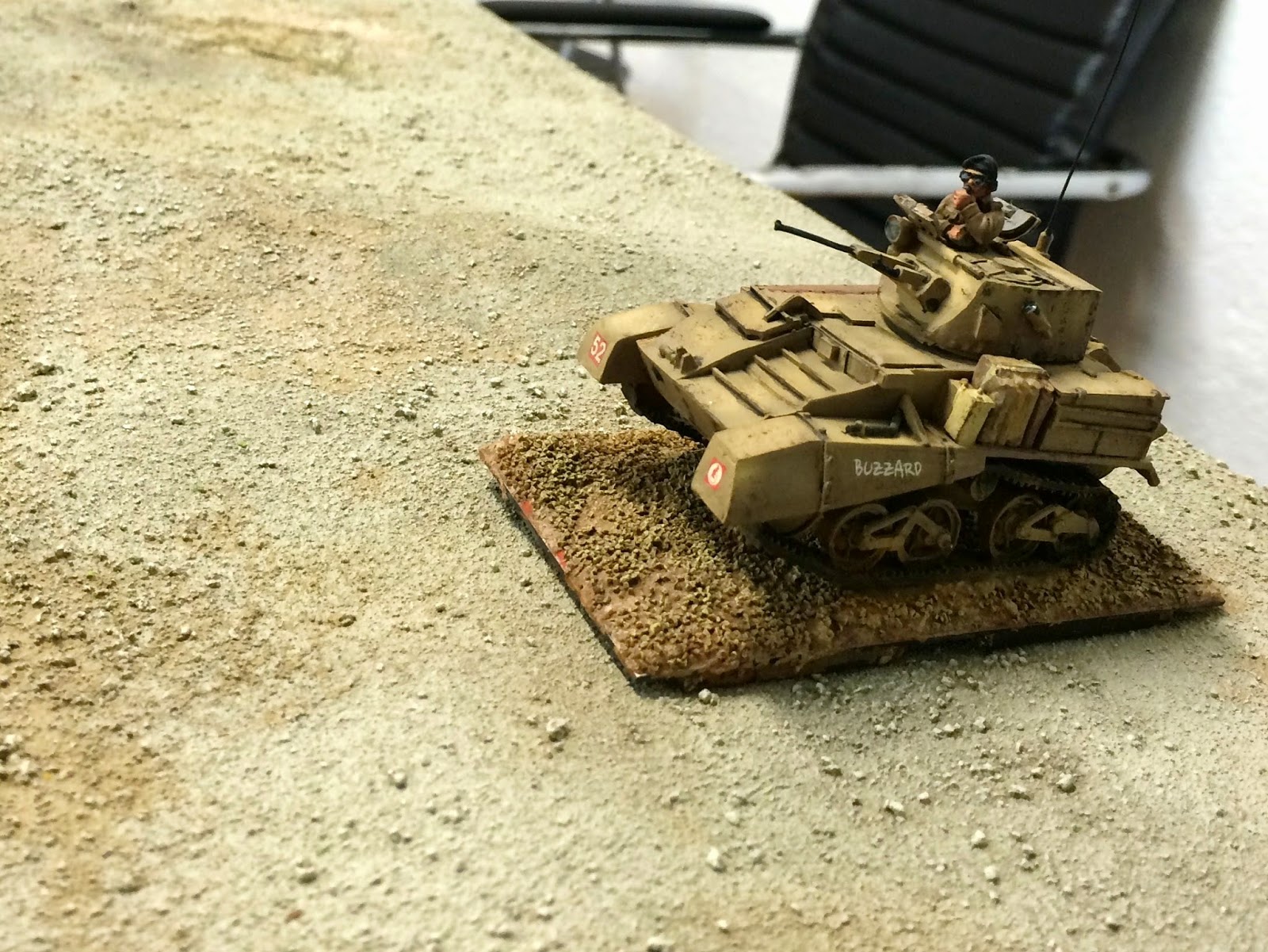 In the meantime, the tanks to my right engaged in fire duel but I hardly paid any attention to it (more later). 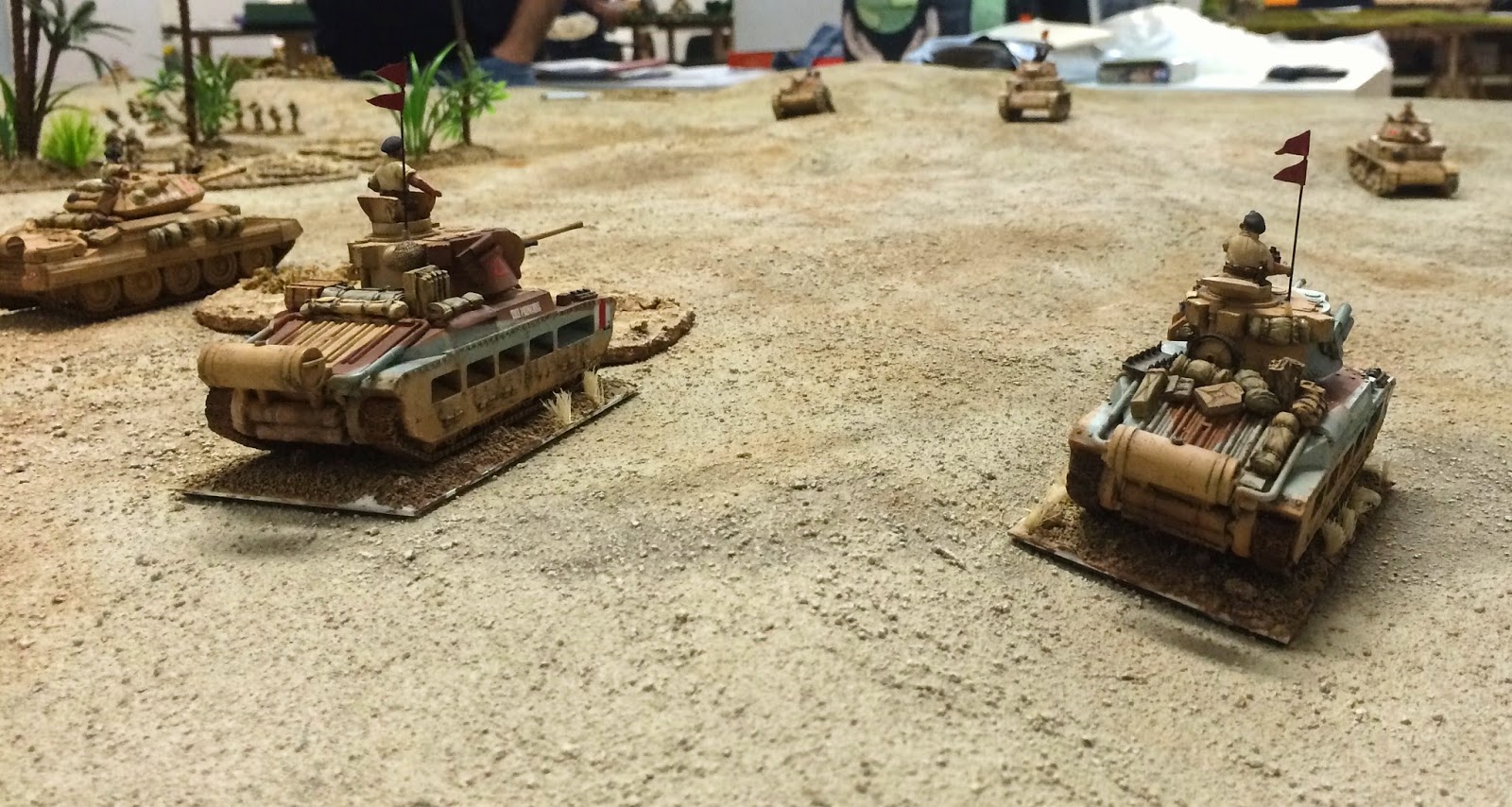 In the next Italian phase an Autoblinda with a 20mm gun was brought into play, being no match for my Mark VI. The Autoblinda charged straight into my position and I had no alternative but to leave in haste, leaving my  jumpoff point (the one to cover my left flank) to the merciless enemy, who duly captured it and used a CoC dice to end the turn. In the meantime the Italians were getting close to the oasis and had my mauled rifle team again in LOS, firing a volley on them and pinning the unit because of accumulation of shock. I radioed to the tank commander to send some support to stop the Autoblinda, who was now threatening (and little later capturing) a second jumpoff point.

I had no means to defend against an armoured element except my Boys ATR, brought into play in a previous phase against the M 13 approaching to my right flank and proving to be a poor weapon.  Unfortunately the tank commander was in the middle of a hot fire exchange with the Italians and apparently did not hear (or decided to ignore) my SOS signal. 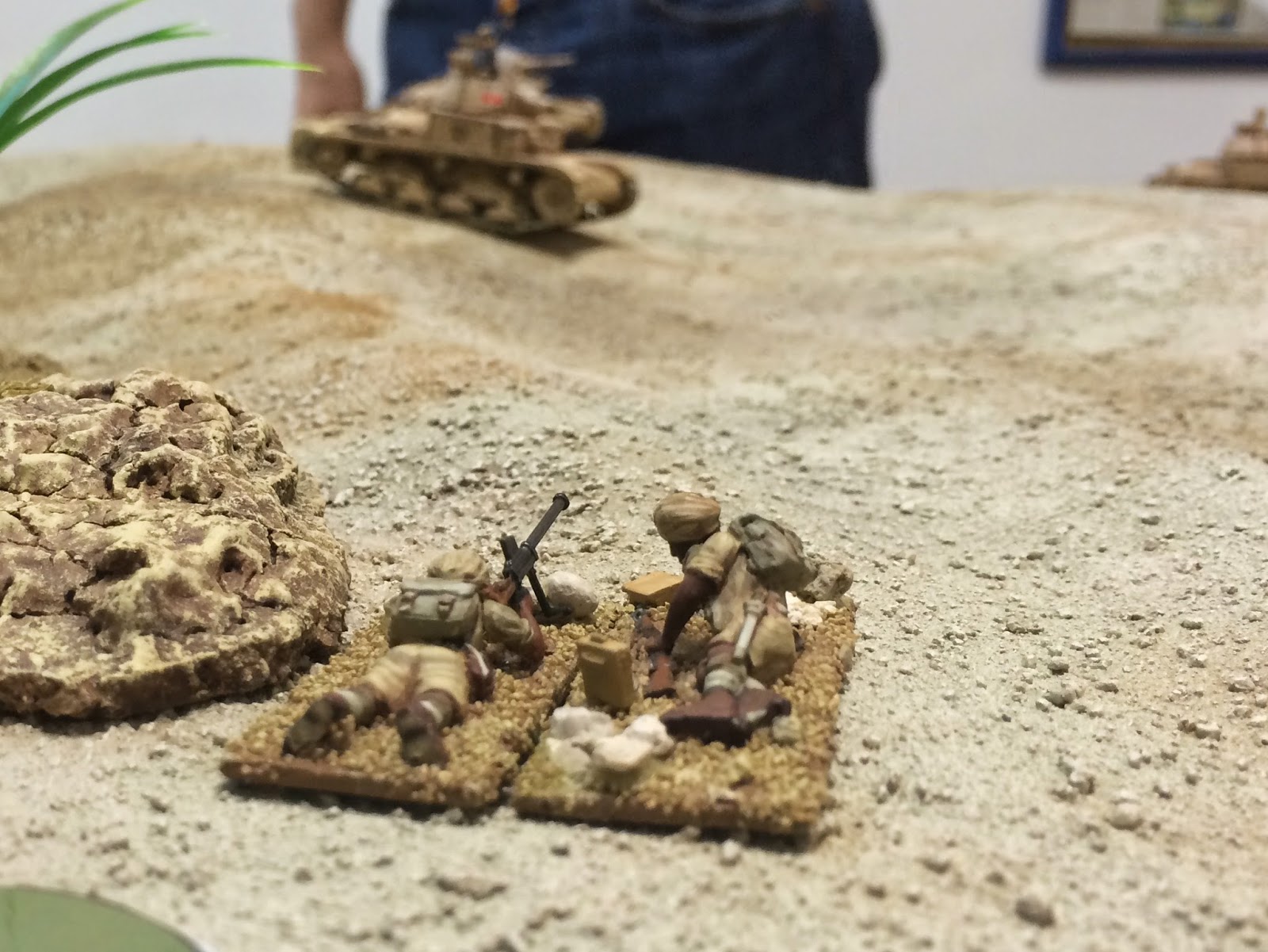 Desperate measures were needed. I went into aggressive defence mode now. First, I ambushed the rifle team bringing on the table an LMG team from another section and firing at short distance to the Italian rifles; second, when the Italians were close to the edge of the oasis,

I brought a second squad and charged the Italians. As usual a bloody affair: the Italian rifles were wiped out but at a high cost in men to the Indians, and additional casualties were suffered when  the remnants of the melee were caught in the open by the Italian LMGs before they could pull back to the relatively shelter of the oasis. 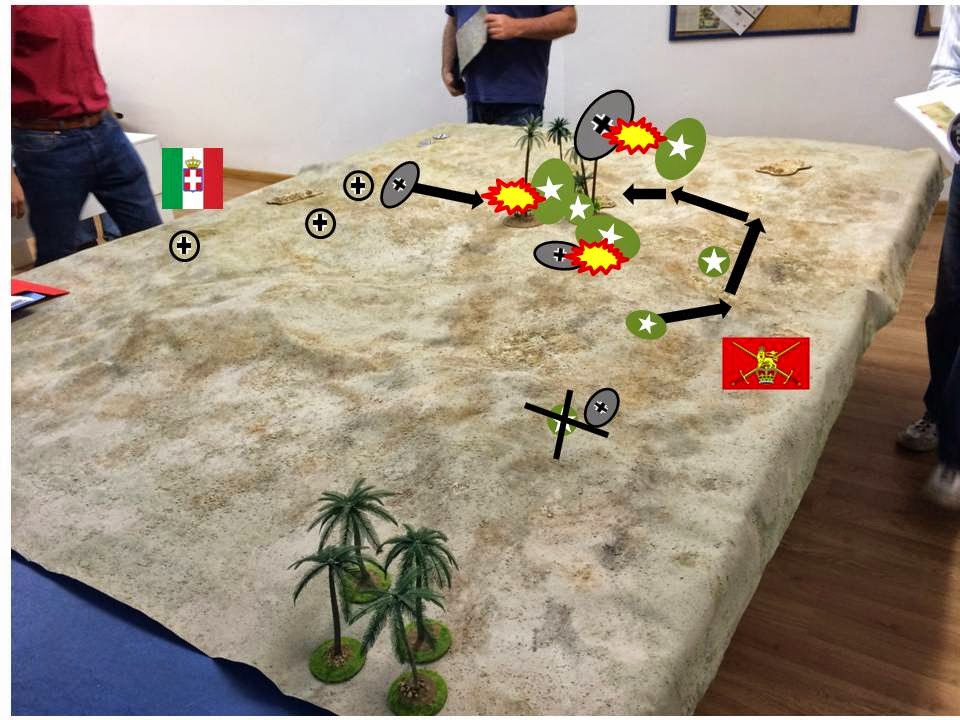 Nevertheless it paid off and the Force Moral of the Italians started to crumble with the loss of the rifle team, the junior leader in command and (unnoticed to me at that stage) two Italian tanks (vs 1 British also destroyed). 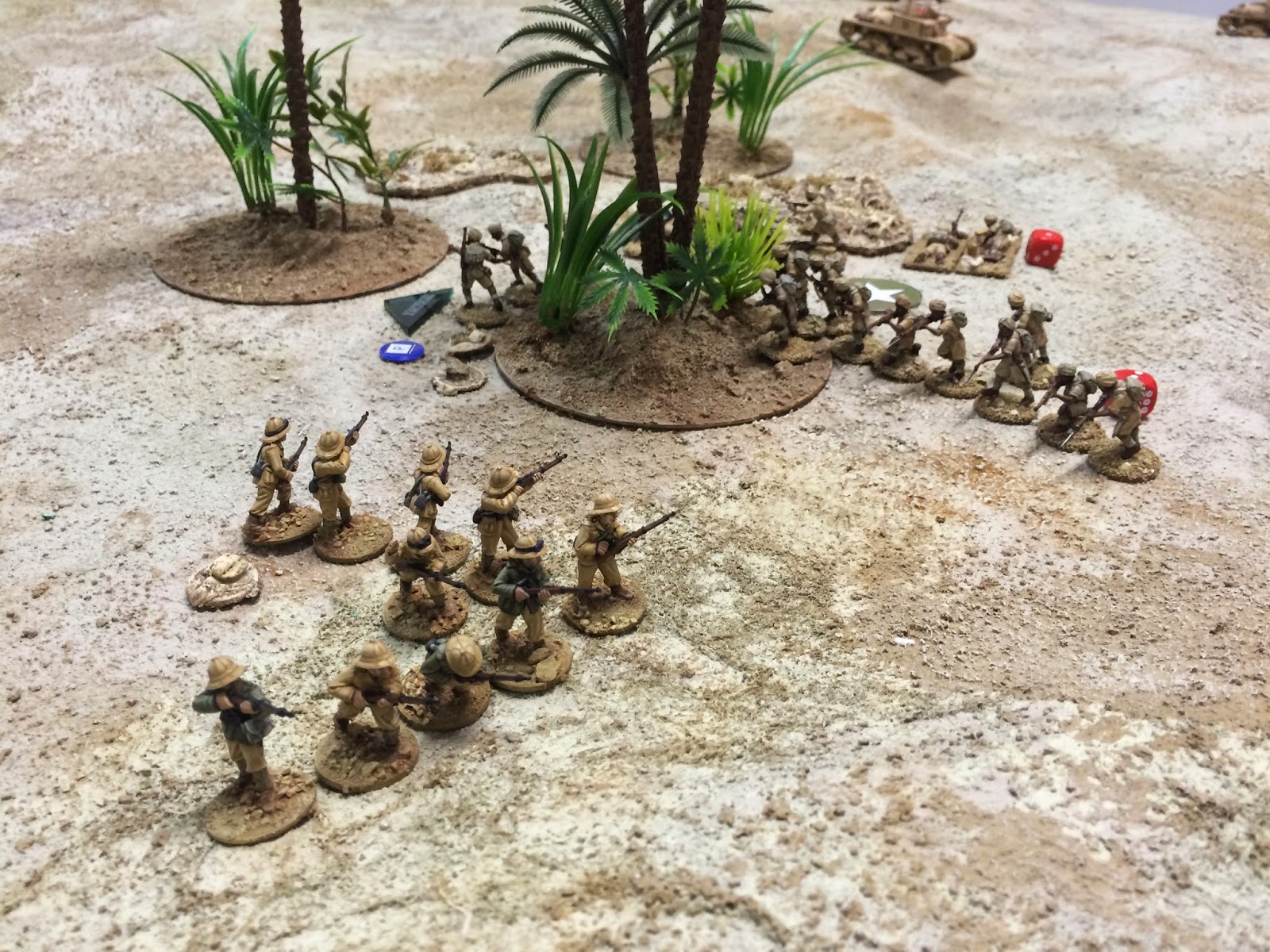 The Autoblinda continued rampaging unopposed in my rear and took over a second British jumpoff point. My only asset was the ATR team, which I redeployed under cover in the oasis and in overwatch to at least have a chance to hit the Italian AFV if he decided to cress crest the ridge in my back.

This was just when the British tank commander realised how stressed was the position of the Indian infantry and detached one of its two remaining Matildas to face the marauding Autboblinda. 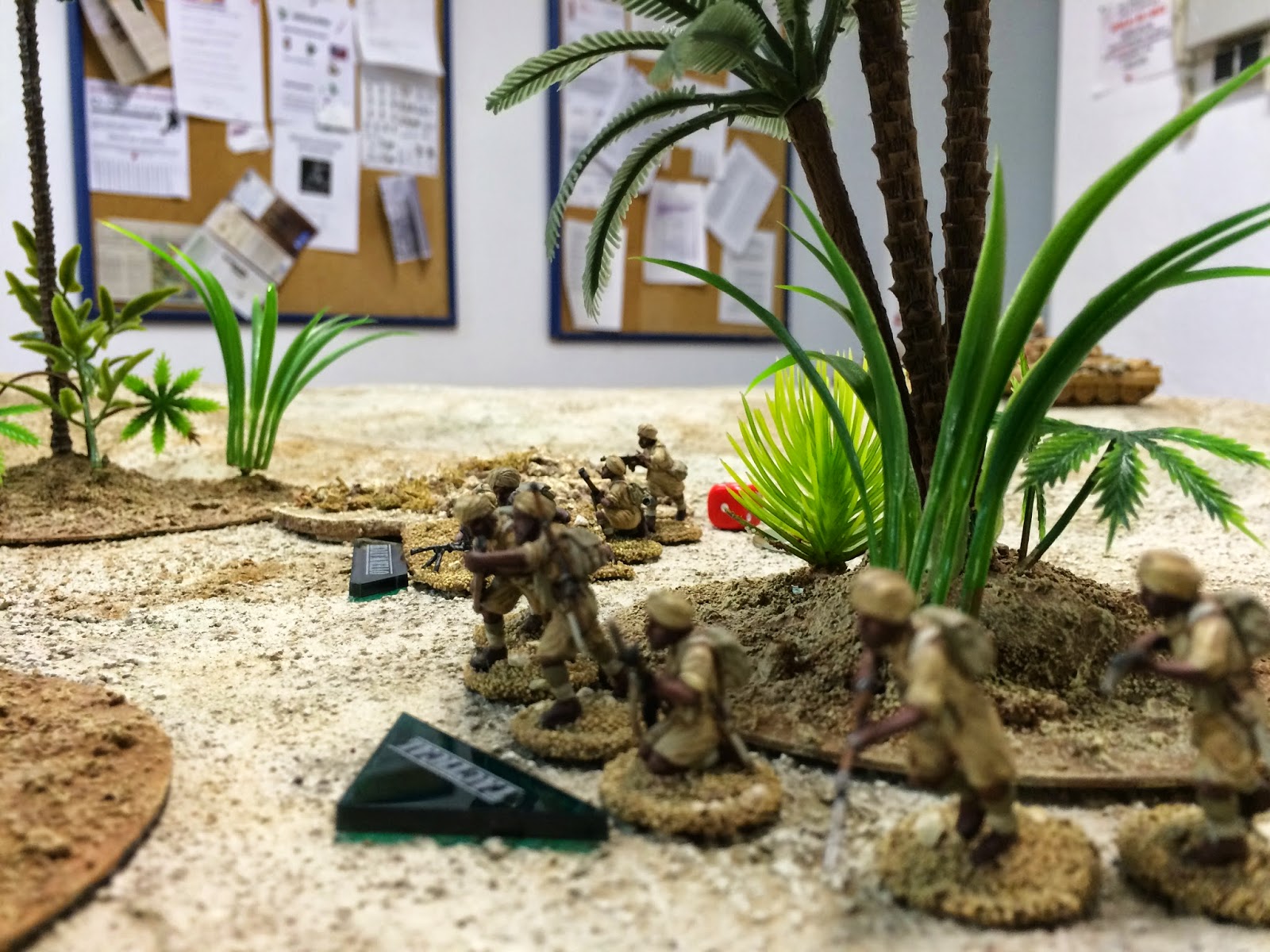 With the Italian attack rejected and the rearguard threat finally deactivated, it was time to take stock of my remaining forces:  on the table I had two Bren teams and half a rifle team with three junior leaders and staff sergeant senior leader, and additionally the Mark VI with the HMG.  I still had a full infantry section off-board, but the Italian had not committed his second section yet, so I decided to leave it in reserve. 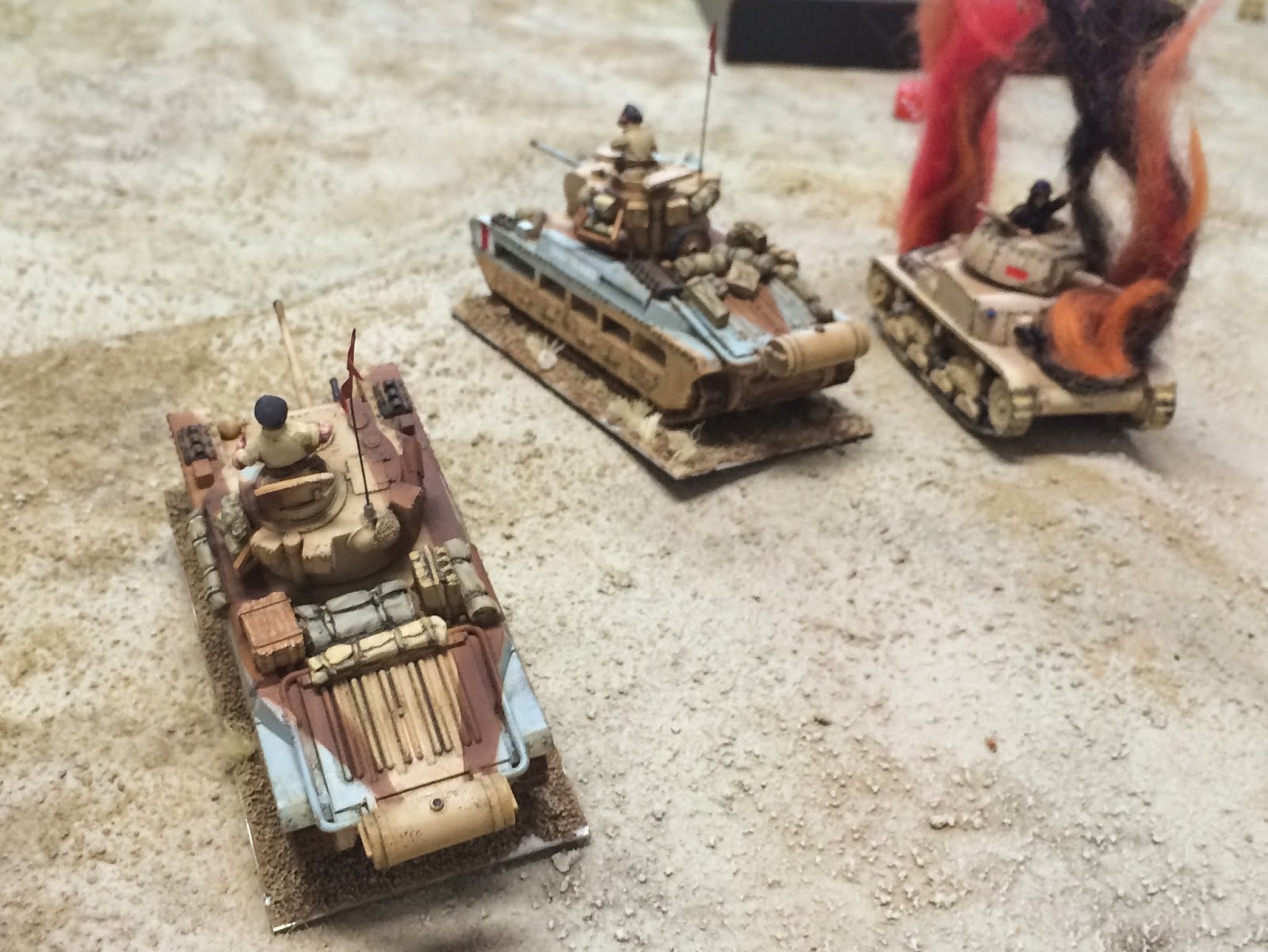 I spent the next phase recovering shocks and harassing the Italian LMGs with the HMG of the Mark VI (Ha! this time it was they who were powerless vs the AFV!!!)  plus the platoon light mortar. Once recovered, I put all available teams on line firing the LMGs, who finally broke with the rain of lead form the fusillade.

To my surprise the Italian second section emerged but in the jumpoff point to the far right of its line, not where the main action was taking place!! I seized the opportunity and launched the Mark VI flat out to capture the Italian jumpoff point, followed by a Bren team. 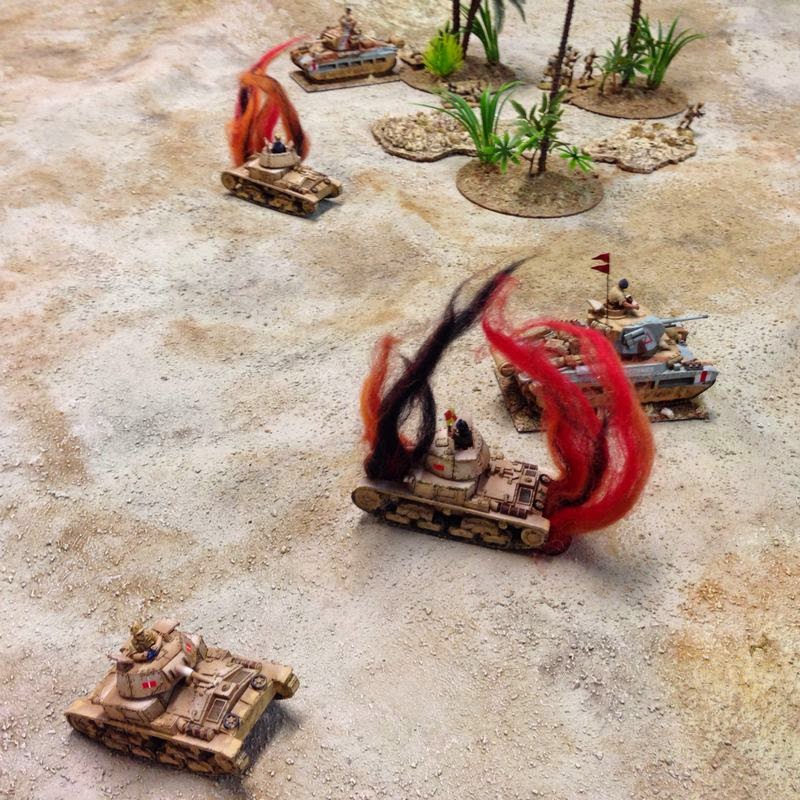 The remnants of the Italian LMG teams fought almost to the last man and broke an recovered several times defending the position. But casualties (including leaders)  and shocks were piling; the final straw was when the other Matilda destroyed the last M13, putting the Italian force moral in zero. 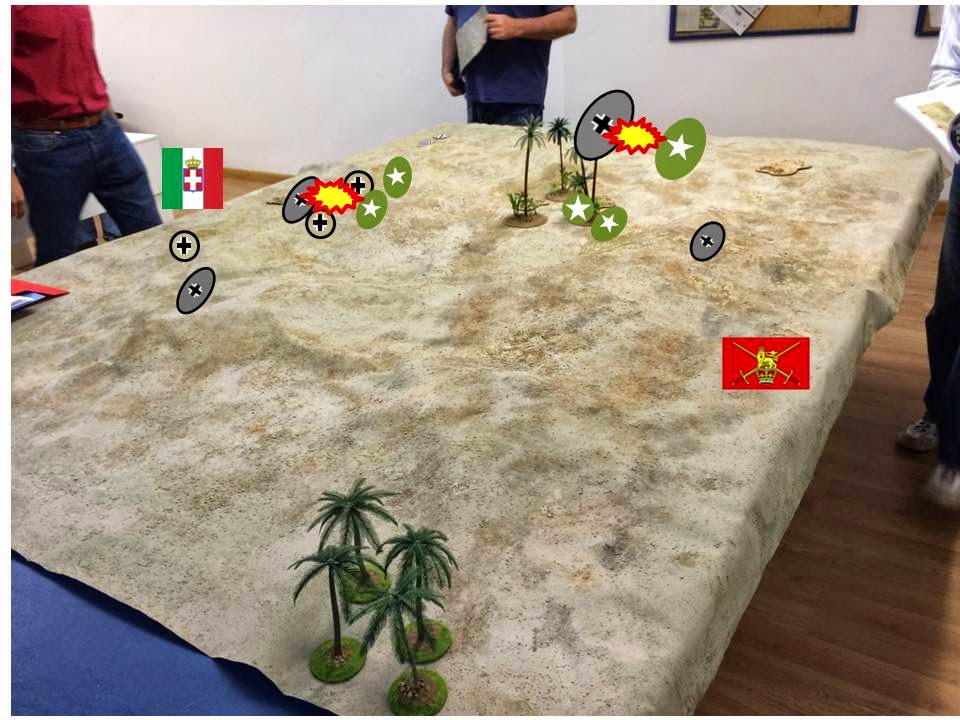 Game for the Empire!!


My first contact with BigChain of Command was totally satisfactory. Two players per side was really fun, and each pair so much concentrated in the enemy just across the table that (specially the tankers) loss all contact with the events taking place in the core of the battle (the oasis)!!

As we were all four of us quite seasoned CoC players, incredible as it may sound but we could finish this fairly large game in just over two hours!!!. It helped that we suffered no friction, no interruptions to read or clarify rules.

A final point worth mentioning is that the tank rules had been tweaked and complemented with some house rules (tested over the last past weeks by my colleagues) involving new mechanisms to fire and hit, that take into consideration distances and other factors. I'm not on top of the changes but will keep you informed.