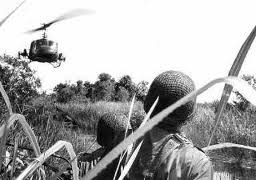 Another excellent weekend full of wargaming fun fro me!!!. While on Friday (local holiday in Madrid) we played another  WWII scenario  of the "Vyazma or Bust" campaign,  today Sunday we returned to the rainforests of Vietnam, playing a new scenario of Surf's Up, the companion book to the TooFatLardies Viertnam-era rules Charlie Don't Surf.

This time we undertook scenario number 5 called "Fix and Destroy": an aggressive US drive on the village of Gok Wan, a firm and well-known stronghold of the Vietcong forces. 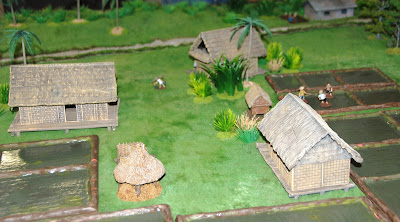 Initial forces and deployment
The US players command an infantry company with three platoons and are supported by a Huey Hog gunship. This is a priority 1 mission in a free fire zone (no need to request artillery permission) according to the intelligence, and a battery of 105mm howitzers is also in alert should it would be needed. The mission of the US player is to capture the village, contacting and destroying at least 50% of the enemy forces in the area; as a secondary mission, caches of food and weapons must be also found.

Th VC player is already deployed around the village. A regular company of the PAVN is resting in the area before joining its regiment; the security in case of enemy attack is provided by some local militia units. His mission is to maintain the PAVN unit as a coherent fighting force with a strength of at least 60% by the end of the game.

The map below shows the initial deployment 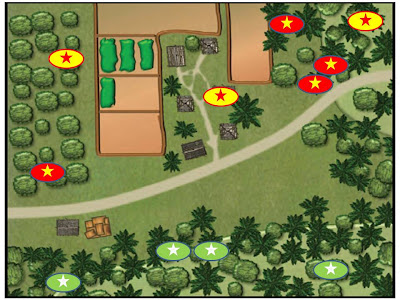 The VC units deployed hidden north of the road; red are for PAVN and yellow for local security platoon. PAVN can not activate until the first US blind is spotted. The US player entered through the south edge of the table as usual in blinds.


Battle development
The three US platoons cautiously entered the south edge  covering the whole lenght of the table and with the HQ post in the center. The platoon in the left advanced and took positions around an isolated hooch and began spotting to its front.  The platoon in the right flank moved in short runs uintil reching the edge of the road, with a dummy blind (recon patrol) ahead.


The center platoon and the HQ moved until the edge of the jungle and took a defensive position overlookingt the main village and the surroundings ricepads.

All US units failing to detect initially any enemy activity, a helicopter was called in support of the right flank... 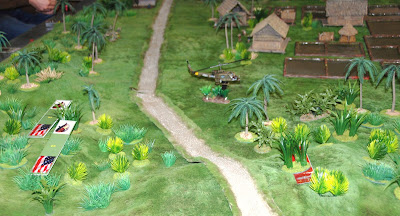 .. which prompted the first reactions of the VC players. 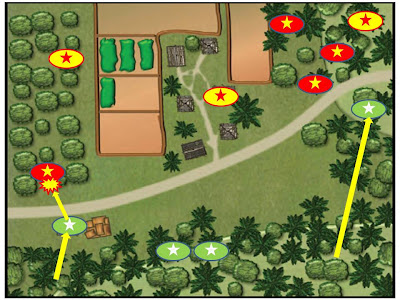 In the left side, the VC unit hidden in a rubber plantation opened fire causing the first casualties to the US platoon deployed around the hooch. In the following turns an exchange of fire at short range continued, first with the PAVN unit and later with the local cadre unit, brought also into action.

The right side of the table is where most of the action took place. Initially, the US platoon there was first spotted and after suddenly confronted by a VC blind emerging just across the road in the edge of the jungle.  In its activation, the US player  decided to charge with the four squads under command supported by the gunship.

However when reaching the blind, he discovered that it was a dummy one (a patrol)... and then the hunters got hunted as just behind the visible position lied a PAVN platoon hidden who in short time (blinds card) ambushed the most advanced (and isolated) American squad wiping it out completely.

In the meantime, another VC squad has slipped through a tunnel underneath the road and emerged just opposite and to the back of the increasingly beleaguered  US platoon, in a hidden trench position reinforced with a bunker. 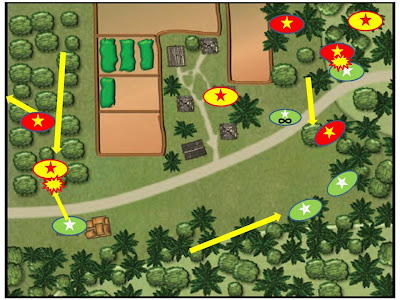 It was now time for the HQ unit and the center platoon (so far in reserve) to move and come into the rescue; it was also the moment to unveil the mighty power of the Huey gunship. While the US platoon near the road pulled back and took a defensive position with its remaining men, the Huey moved and attacked the entrenched  VC unit,  unmolested by the AA fire... 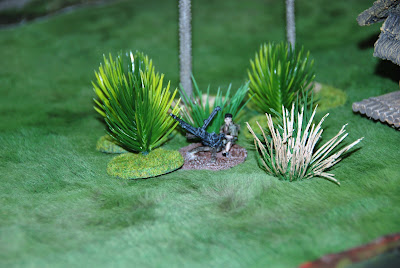 ...too far from the area of action. The gunship attack caused havoc to the enemy unit... 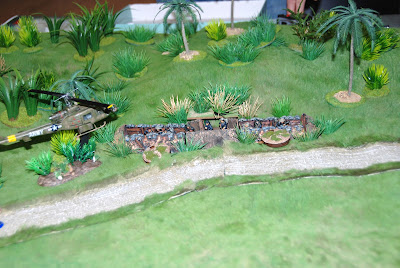 ... completing the carnage by a close assault of the US infantry... 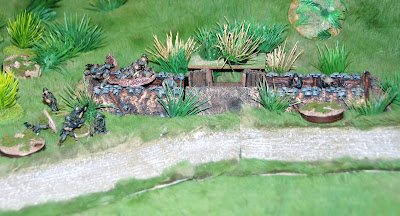 ... that took the position and captured the last remants of the VC unit still in state of shock after suffering  a rain of lead and fire.

The reamining VC units (left and right) took advantage of a stream of  Di Di Mau cards activation to go back into blinds, some of them leaving the battlefield by the side edges of the table. As it was then close to 1.30PM and we had been playing for more that 3 hours, we decided to conclude the game.

The VC force was still strong (surviving over 60%) and the US were yet far from controlling the village, we dediced to award the military victory to the VC team.

However, in terms of political points, the VC lost a significant number of bodies that could not take with him, and in addition the units leaving the table had to do it through the adhjacent edges to the tactical one, whioch means the possibility of being captures by the Free World Forces patrolling offtable. Therefore, the political victory fell this time in the side of the US players.

After Action Comments
Another great game that again illustrated the high quality of Charlie Don't Surf, for me the BEST rules set written by Richard Clarke so far. Three comments:

(1)  As umpire it took me a little bit of effort to gain cruise speed today... after umpiring three recent and consecutive IABSM games over the past weeks, I felt really insecure of failing to use the right rules!!!. While some core mechanisms of CDS and IABSM may look identical at first glance, then you discover that some details are important and mark a real difference. It is a shame because I LOVE these two games/periods  and I want to keep playing both in alternative weekneds both from here to Christmas.... and I'll keep trying

(2) I had two new players today added to the group. Typical rules questions emerged from time to time, but the tactics discussion was the topic most discussed... another great achievement of CDS to have the rules in the back most of the time and not being the "guest star" of the game.

(3) I have already commented about  the "warmats" developed by one of our club member, these felt-type mats where we usually play our games. Still not (but it seems that finally close to) commercial stage. Today we had another surprise: a new range of South-East Asia/Pacific hooches made in resin that are shown  in some of the photos; this is an evolution of the old models 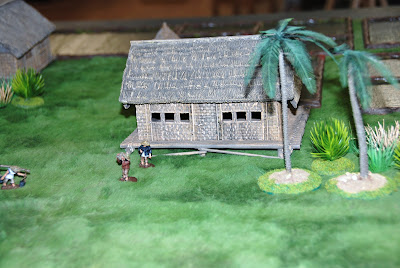 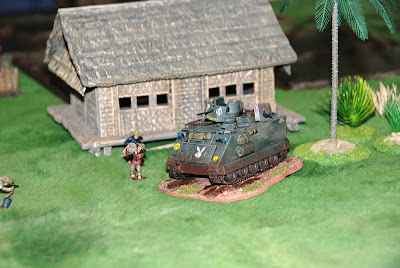 And last but not least, my blog this week has broken the 90,000 pageviews barrier. Thank you, thank you, thank you SO MUCH to my 156 followers and to all those bothering to invest some time in reading my posts and leaving comments.

I started this adventure in March 2009 part as a way to force me to keep my English alive, part as an experiment to understand from inside how these social media tools work. I did not have plan and I did not know for how long I was to be investing efforts and time in keeping it alive.

But over time it has captured me; and now I cannot think living this hobby without the blog, the same way that I buy and paint minis or read rule books and  research historical information. Similarly, I have discovered how this blog can be such a powerful tool in creating relations and links with so many people across the globe (Spain, the UK, the Nordic Countries, The Netherlands, the US and even Australia/New Zealand...) who share the same interests and thoughts, that I can now consider some of them even closer than some guys that I see daily face to face. 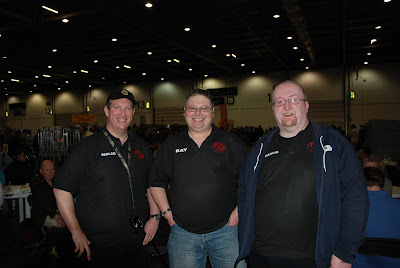 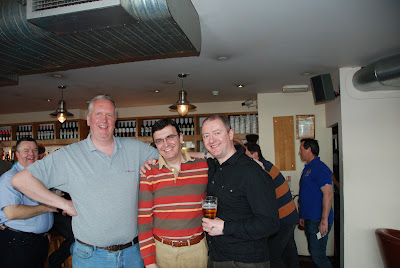 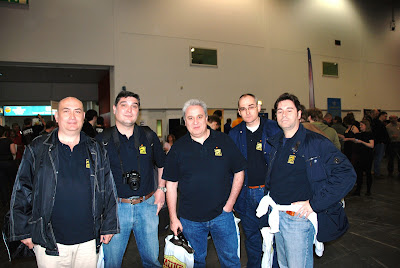