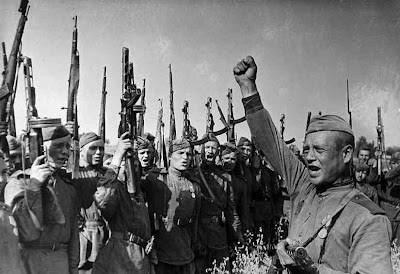 This is the battle report of the second scenario of  Vyazma or Bust, an Eastern Front campaign played with I Ain't Been Shot Mum from TooFatLardies. The first scenario saw a defeat of the German forces in the attempt to break the lock in the Smolensk area which would have opened the door to a blitz into Moscow.

The reaction of the Red Army to this unexpected victory was a hasty counterattack with all the available infantry and armoured forces that have left isolated important pockets of German troops. This second game, around the small village of Belyj, is a classic encounter between a Russian column moving north to contact and destroy the enemy and a German kampfgruppe trying to break the encirclement and returning to its own lines. 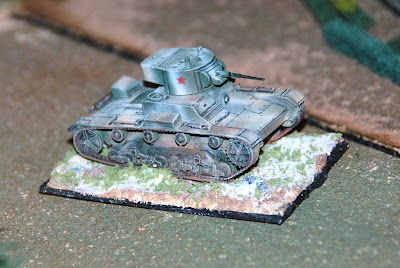 Forces, objectives and initial deployment
The German foces comprised a couple of rifle platoons on foot, supported by a motorised HQ platoon with heavy weapons together with a collection of different armoured units ( 2 x Pz IVs, 1 x Pz II, 1 x Sdkfz 222 and 1 x Panzerjager) left behind in the hasty retreat and short of fuel. These forces are escorting the divisional artillery HQ. All German forces are veteran and good moral.

The Germans deploy in a collective farm (the site of the artillery HQ) located in the north of the table and must cross and exit the table by the southern edge to win the game.

The Russians enter the table in two columns from the southern edge of the table: an infantry on foot column on the left, comprising 2 rifle platoons with a weapons platoon (MMGs and  mortars), all poor regulars; and an armoured column with 5 old T-26 on the right. The columns include a scout platoon. 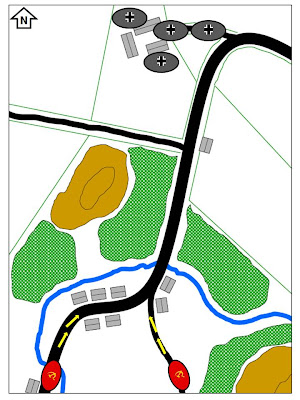 The Russian objective is to contact and engage in combat the German forces, preventing the enemy from achieving their victory conditions (unknown to the Russians); and a secondary objective, to occupy the farm in the north with at least one army Comissar.

The German deployed in blinds around the farm and made a quick dash south along the road, with the two infantry platoons covering the flanks and the armoured column in the centre...

... while the Russians, entering from the south through the roads, broke their left column in two groups, the first bypassing the main combat area and heading north towards the farm.

Battle development
Following the first opening moves, the battle slowed down substantially when the opposing forces clashed in the road fork across the river, developing in a series of frontal attacks between the armoured units and a few attempts by both sides to bypass the enemy by the flanks.

The Russian armoured column quickly broke ranks and scattered around when they realised the superiority of the German panzers ahead...

...losing two vehicles at short notice by a combination of AP fire and infantry grenades. 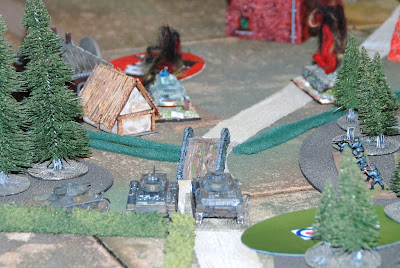 However, the attempt of the German panzers to move forward was cut short by a counterttack of the remaining T-26 and the Red Army infantry, losing 1 Pz IV and the other retiring by accumulation of shocks.

In the meantime, the German infantry covering the right flank (and ordered to support the panzer attacks), was caught in the rearguard by a human wave of Russian infantry, running thorugh the woods in state of frenzy (probably helped by a generous dose of Vodka...)

Despite better moral and training, the Germans were owhelmed by the sheer superiority in numbers of the Russians, being overrun and put hors combat the whole platoon.

On the German left flank, a lonely T-26 was trying to outflank the main road and the second infantry platoon was sent to cover the gap, enganging in a series of close assaults but playing no other role in the game (personally  I think this was a waste of resources, that could have been employed more effectively in trying to gain a foothold in the village).

The final move in the battle came when the a column of lorries (the infantry and the artillery HQs respectively) left the farmn  heading south...

... creating a massive traffic congestion in the bridge at the entrance of the village, still under firm Russian control. The Russian recon units in the farm at the north and escorting the Comissar, now moved south and started harrasing the truck column, forcing the German infantry units to debuss and to take cover in the hedgerows nearby.

With the time now close to 2.00PM (lunch time!) and after more than 3 hours playing, we decided to conclude the game. After some discussion, the Russians were proclaimed winners by a short margin. The argument went that the Germans had still superiorty in armour (1 x Pz IV, 1 x Pz II, 1 x Jadgpanzer 1 x Sdkfz 222 vs 2 x T 26), but on the other hand, strong infantry forces were holding the village and rendering impossible the artillery HQ column to cross it safely south.

The Germans would have had to concentrate their scattered forces and made a strong dash into the village with the remaining infantry and suppoorted by the AFVs; this woul have had taken a lot of time and the outcome was far from clear. Considering that the farm (a second objective for the Russians) was also taken, it was finally agreed to award a marginal Russian victory in the game.

Follow up impressions
After two games players are putting the rules mechanics in the bakc of the mind and are more focused on tactics. The lessons (for the Germans) of the first game were also useful and the game was much more balanced.

As expected, IABSM showed to be a flexible tool to play games and not a tome of laws and regulations a la Squad Leader for example, well adapated to simulate prevailing conditions in the WWII battleflleds. A remarkable feature of the game experience is the almost total lack of "legalistic discussions" among players  with an increasing focus on the tactical options.