Last Sunday 26 December we held one of our monthly "long games" (usually played at night on Fridays, but this time shifted to the afternoon time, taking advantage of the Christmas holidays). Using Through the Mud and the Blood we organised a large WW I action, located in Ypres around mid-October 1914. The game involved 2 full platoon-sized forces per side together with a wide array of supporting elements (cavalry squadrons, artillery...) entering the table randomly in different turns.

The game was played in a large 8" x 6" table. The terrain was flat,  representing some key secondary roads in a farming area dotted with crop fields and small tree areas. 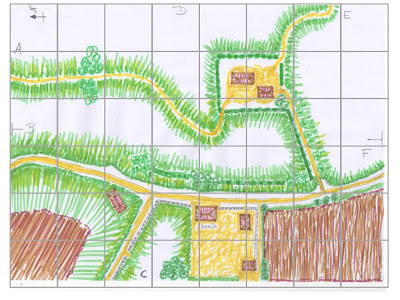 The following are some photos of the gaming table, the first being a view from the north side and the second from the southern edge. 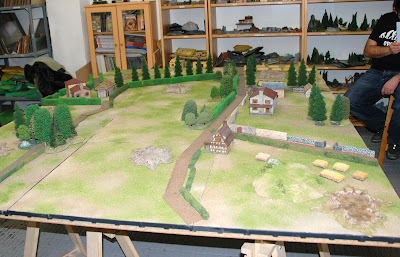 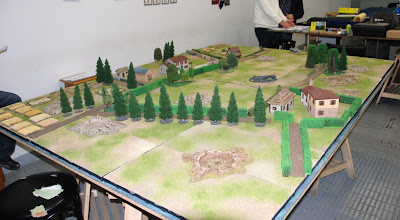 This was also an opportunity to use our new terrain modules made by a Spanish company called En Cobertura. We are really happy with the new terrain, made of very light but quite sturdy materials. The visual improvement is noticeable. We're planning tro acquire some roads and other geographic featrures (trees, mountains, shell craters, etc) over the next months.
British forces and objectives
The British forces were commanded by Captain Oliver Hardy (BM 4) of the 14th London Regiment (see photo below, in the command post at the farm questioning a German prisioner). Thet initial forces on the table consisted in  2 full rifle platoons  (8 squads) and and a support HMG squad. They were allowed to deploy along the eastern edge of the table and the large farm located in that side, in blinds inside some reinforced positions (providing light cover). 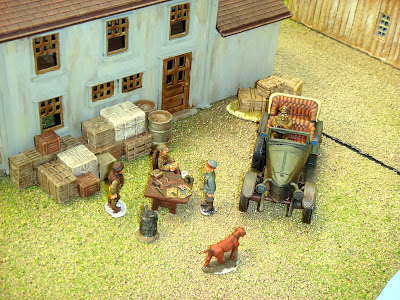 In turn 3, Leut. Ambrosius McFly (BM 3) of the 11th Hussar will enetr the table, with the mission of gathering a number of scattered British units that will enter the table randomly from the 4th turn (snifter card)  ownwards (photo: British high command minus 1, i.e. myself behind the camera). 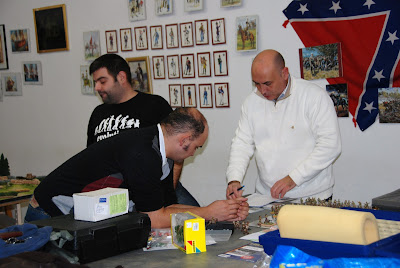 The objectives of the British are to control the farm compound and to  block any German forces leaving the board through the eastern edge. The following photo shows the initial British deployment. 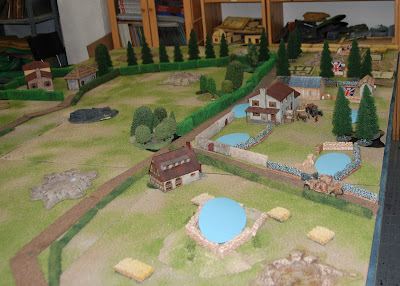 German foces and objectives
The leader of the German forces was Oberleut. Oliverius von Strudel (BM 4) of the cavalry Guards Division. His initial force is composed of 2 cavalary HMG squadas and two Lancier platoons (a total of 8 squadas. Being an early war scenario we assumed the German tropps were subject to "bunch" and were considered "green" (+1 to hit) when fired by the British.
The German main force were additionally assisted by a special detachment commanded by Leut Erwin Rommel made of a HMG section and 20 fusiliers (veteran/aggressive).
(Photo: German high command discussing with umpire) 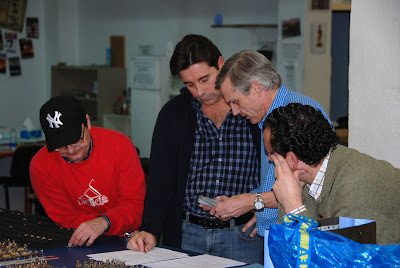 The objective of the German was to control the farm compound. The main force was to deployed in the southwest quarter of the table. The mission is to move from south to north elimninating as many British units as possible and control the farm. Rommel's detachment was allowed to move independently, his mission being taking the farm and then ceeding the control to von Strudel.
Battle development
The initial deployment reflected  the objectives set and initial scenario indications for both contenders. 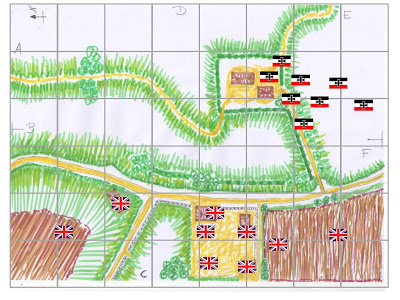 The British went for a  a strong center around the farm compound, extending their lines to both flamks in order to cover all possible exit points of the Germans; remember they had no knowledge of the German instructions (take the farm) or the initial deployment instructions (southwest area). The British HMG was placed in the upper floor of the farm, but the scattered tree copses around the building limited the line of sight of this unit.

Once the British deployment was concluded, it was the turn for the Germans, who deployed as stated in the scenario instructions, in the southwest quarter of the table. The British saw this deployment as a threat to its right flank, lightly defended by just one infantry section. Hasty orders were given across the line to move right... 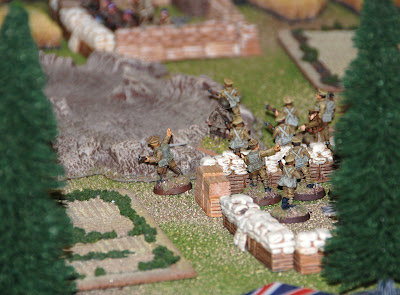 ... leaving one section on the left flank (see photo) in order to cover potential attacks from German reinforcements 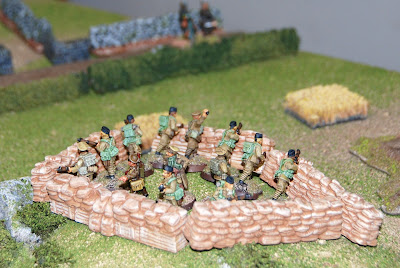 The Germans initiated the assault on the British line moving forward all the units under von Strudel command... 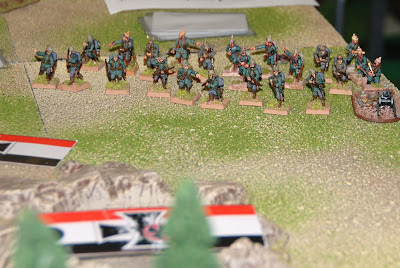 ...while Leut Rommel's detachment decided to leave the cover of the tree hedges in the road running east to west and moved double-step to the small wood just in fornt of the farm.

The orders were given and for the British the game was now to run againts the clock, placing as many units as possible on the right to contain the German tide. The following map shows the main movements ordered: 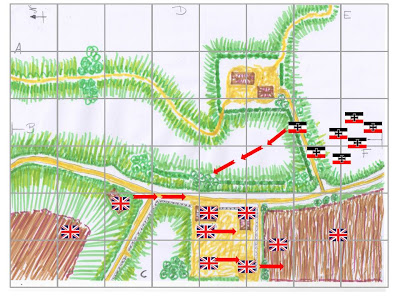 The game developed in net favourable terms for the British since the begginning. The German army advance got bogged down close to the deployment area, limiting themselves to just exchanging fire with the British units arriving to the threaten flank and accumulating a large amount of shock points. The area was very congested with so many German squads in it that was impossible to deploy all the units and to make full use of its higher firepower (some units blocked the line of fire of others). 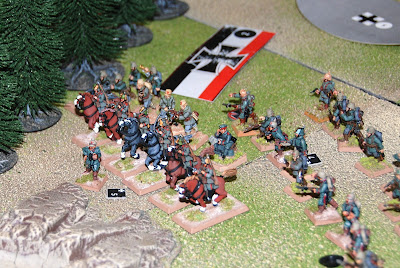 From turn 3 and ownwards the arrival of reinforcements commenced. The Germans received initially a lancer squad, hitting the table in the rear of the British line, creating some initial disordered among them. 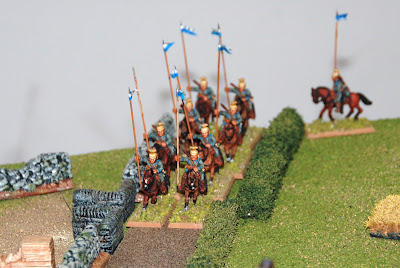 The lancers charged the British defensive position covering the left flank, but were rejected with high casualties and routed outside of the table. 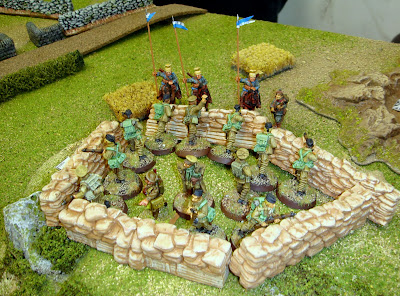 In the meantime the British received the command group of Leut Mcfly... 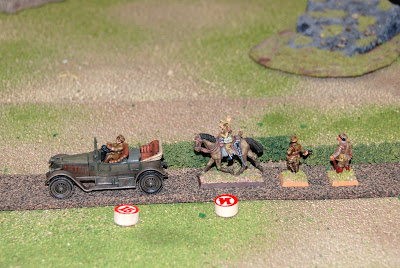 ... who took the control of an Indian cavalry unit arriving on the table in the following turn 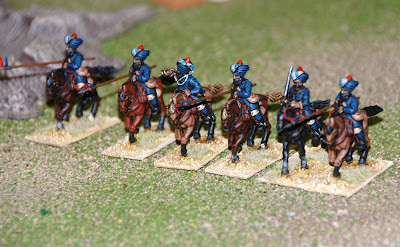 ...and initiated a charge on Rommel's detachment support HMG sitting in the open. This charge was not concluded because the lack of activations of the commanding Big Man in the following turns. 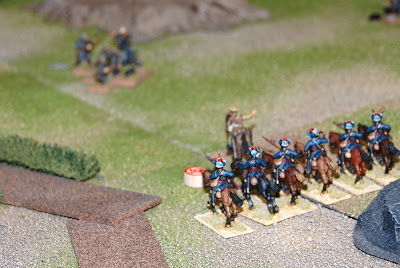 At this stage of the game the only German unit making some progress according to the orders received was Rommel's detachment. A few fast moves (including some lucky "SturmAbteilung Vorg!" cards in rapid succession) and the unit finally reached  the woods facing the British farm. 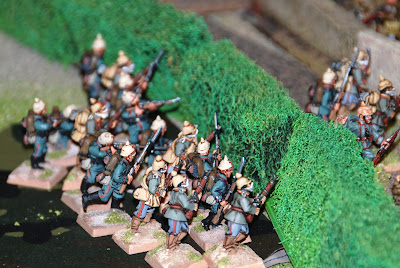 It was now or never. The German player commanding Rommel's unit decided to launch an all or nothing assault, considering the strength of its unit (20 fusiliers + Big Man level 3). But the British were ready with three squads in the sorrounding area. 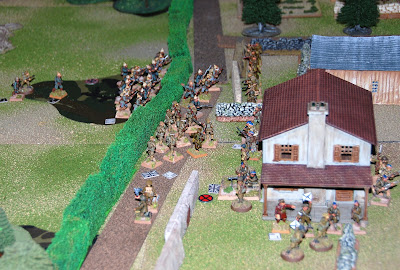 A mountain of dice rolled on each side... British overwhelming victory with half of the Germans killed... and in excess of four "sixes" over the number of casualties achived by the German unit... thrown back 18" (!) and doubling the number of shock points... Rommel was routed. 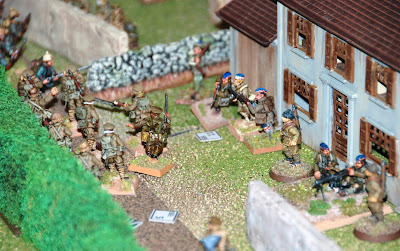 We stopped the game (after more than four hours) to take stock of the situation:
The umpire considered as very umlikely that the Germans were able to achieve their objectives with the remaining focres and declared a British victory.
Conclusion
In terms of tactical development, my view is that the Germans lacked enough coordination in the way they handle their forces. Their left flank was powerful enough to have wiped out the initial British forces deployed in that area, but instead of an aggressive move they decided to use the riflke and HMG fire to overcome the position. The result was providing enough time to the British to reinforce the flank and the German advance stalling quickly.
Rommle's detachment move was a bold one and was perfectly undertook. The problem was not having enough support from the rest of the German forces for the assualt. Should a copule of German squads had arrived to the farm and the assault would have been more balanced.
The German cavalry reinforcements were also wasted in piecemeal attacks on the British strongholds, playing no role in the whole battle.
Finally in terms of the scenario design, I think it was thoroughly prepared by the umpire and the level of fog war on boths sides was really high (making it more enjoyable). However, it also illustrated that Mud & Blood is NOT designed for large battles.
We had to manage 17 big man per side plus a lot of support units. Turns tend to be too long and friction along the game was noticeable, as some units were not activated for long time in a row. This is a point that I commented with the umpire before the agme and I tick to it: do not try games involving more than 8 (10 at maximum) Big Men.
More photos
If you want to see the whole photo album of this game, please clike here
Publicado por Anibal Invictus en 13:53