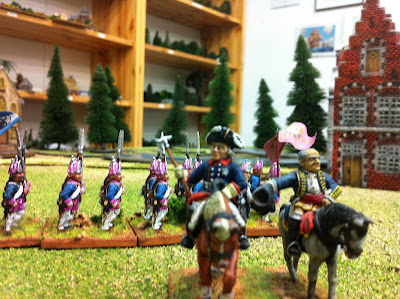 Toda I have my first taste of Maurice the set to play 'The Age of Reason' battles written by Sam Mustafa. I did really try to resist the temptation, but the pressure was overwhelming against me: the beautiful and colourful armies of the age (which I started to collect but never finished 20 years ago), the very nice painted 28mm armies owned by some of my gaming mates and frequently displayed at the club over the past months, plus the chats overheard between some of the actual gamers during our recent trip to Salute, were a too powerful combined mermaid's call to resist.

An additional attraction is that Maurice is a card driven-game, my favourite system since playing TooFatLardies rules sets. Although the game is developed in turns, in which the active player may fire (and be fired by the enemy musketry), and choose one action (march, rally, charge or bombard), the cards play an important role. Not only they put a limit to the number of orders issued to the units, but also have an important impact in the turns, as the passive player may modify with his own cards the orders of the active player.

This morning we played a historical scenario, the Battle of Chotusitz (1742) staging Prussians against Austrians. The objective of the Austrians was to take the village and defeat the Prussain army, initially heavily outnumbered but waiting for reinforcements commanded by Frederick the Great himslef arriving in the first early turns.


The Austrians opening moves were to activate and to launch the cavalry force (larger and of better quality of the Prussians on the table) on the Prussian right flank. The Prussian foces resisted as best as they could giving time for the reinforcements to arrive and to create an extended line of infantry. Once in place the infantry steady marched on the Austrians and started to fire volley after volley (Prussians troops have a better fire rating).


The Austrians charged and mauled the Prussians, and after a very deadly musketry volley, created a large gap in the Prussian center. However, the  arrival of the Prusian cavalry corps helped to restablished a coherent line and the gap was filled. After 3 hours play, we decided that a draw was a coherent result. There were not enough Austrian troops to take the village, but neither the Prussians were in a position to defat the Austrians.


Overall, a good game that I really enjoyed. I need now to read the rules in depth and start getting familiarised with the cards and their impact on the troops performance, which will require some additional games. The rules are well written and pretty straightforward, the card system allows for a fair amount of uncertainty and unpredictability, making the game much more fun.

A final note. I have also played Lasalle ,the Napoleonic-era rules by the same author, and I know many  people out there being critic to that set. I have to say the Maurice is a much better and improved system, worth testing of you like playing the XVIIIc period.