X-Wing: Father against Son and the new gaming mat 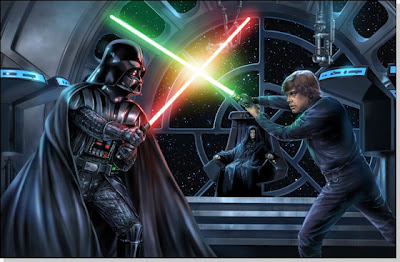 Two very excited Young Padawan Alex and father organised a X-Wing morning at the club to try our new Star Wars gaming mat, that just arrived on time for the event last Thursday evening. We quickly have a few onlookers around  attracted by the nice visual display of the game, even enlisting and training a couple of them in their first combat flights in a far away galaxy. 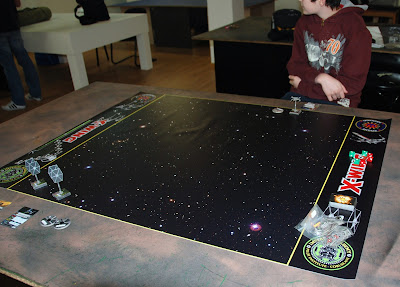 I acquired this mat through Internet to Lex Stormwalker, a very nice Spanish blogger and X Wing aficionado. I truly made a leap of faith here because I could have been easily cheated; but since our first email exchanges, I felt the guy was serious and realiable. So I made a bank transfer, the following day I got the TNT transport code in my email and a few days later the mat at home. 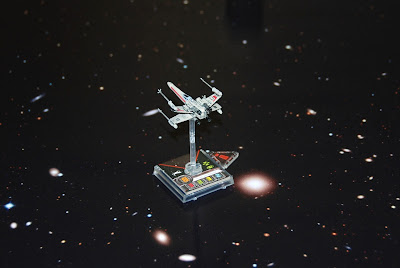 The product looks very robust and significantly enchances the gaming experience. Lex have different models on sale. I went  for a relatively simple one (model 05)  because I did not want too much light on the playing area for our little spaceships. If you are planning to buy one of these mats, based on my customer experience I strongly recommend giving Lex a chance (lexstormwalker@gmail.com), although unfortunately for the time being it only serves the European Union (including GB, for the Brits out there!!). 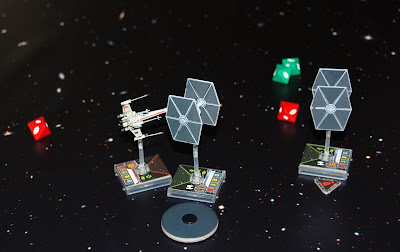 As for the game, we started with the basic 3 spaceships module, but after a couple of games and with other "pilots" joining us, we ended up with 5 spaceships (including the Advanced Tie Fighter and the Y Wing expansion pack models) and using the Luke Skywalker and the Darth Vader cards (oddly enough I play the son and Alex the father). 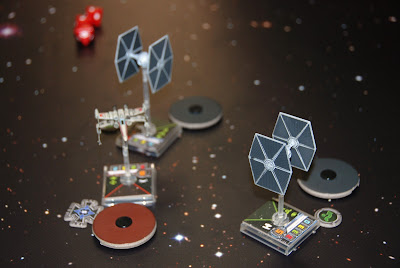 We played a total of 5-6 games in 3 hours (including a coffe break) and have great enjoyment. The two new players were also quickly engaged and my belief is that this week two new basic game boxes will be sold in some shop in Madrid. 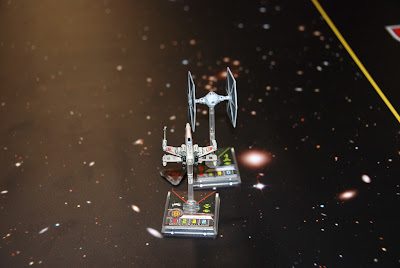