We finally played the scenario described in the previous post, with a marginal victory for the Germans (they captured a full British section as prisioners but were not able to find any relevant documents). 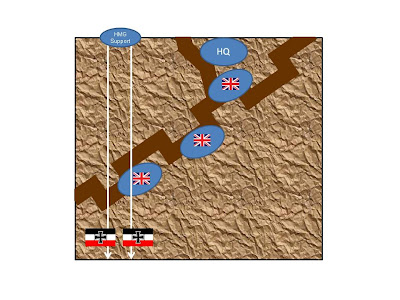 The British deployed its sections in the dug-outs as marked in the map, deciding to cover its right flank (closer to the entry point of the Germans) with the off-table HMG in sustained fire role.

Two sentries were posted, one in the junction between the communication trench and the main defensive line; the second next to the dug-out at the right hand of the British line

The Germans (as expected by the British player) entered the table in 3 blinds on the left flank, with the idea of moving fast into the trench line and inititate a set of close combat action moving along the trench. Each of the the two Big Men of the HQ section were allocated since the beggining to two different squads. 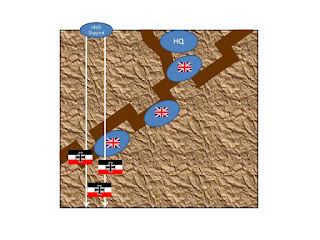 Despite a pitch-black night, the first blind was spotted in the first turn by the sentry and deployed on the table. The HMG made little impact on this unit, and after the second activation it quickly reached the a first wire line (spotted as "status 3) and thereafter (with the help of  a "Storm card") jumped unopposed into the trench line, ready to assault the first dug-out.  The other two blinds were not spotted and advanced following the leading formation, although the rearmost blind started to accumulate some shock points from the HMG.

In the meantime the British player was able to raise the alarm after the first German squad was successfully spotted, and started rolling aquads activations with mixed results only. 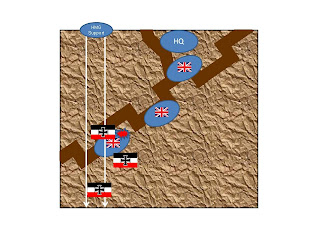 The first German squad reached  the entrance of the nearest dug-out and the hopeless British troops caught inside decided to surrender without firing a shot. The German player detached two guards and send the 8-man British squad under escort to the rear. The second and the third blinds were finally spotted by the second sentry (located in the junction with the communication trench). The latter squad started to accumulate losses and shocks from the HMG fire, moving now at snail-pace and unable to support the actions of its sister aquads. 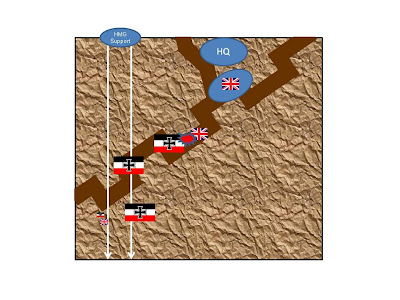 In the meantime the British squad of the second dug-out deployed on the trench line with an LMG that put addtional deadly fire on the German squad located in the open. The second German squad initiated a charge move and fought in close combat with the LMG British section, forcing the British to retreat to the communication line, but at a heavy cost in terms of casualties for the Germans. 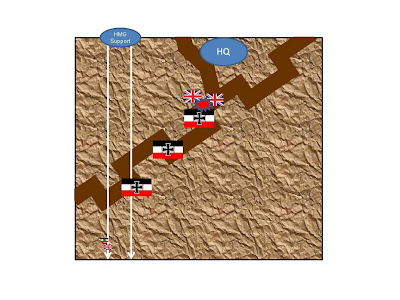 The first  German squad now moved into the fray and attacked the forces at the junction with the hope of further weakening the British LMG squad; the third British squad came out of the dug-out and joined the combat (together with the two senior Big Men from the HQ bunker) and completely routed the attacker.

After-action note: in calculating the close combat dice we made a mistake that favoured the British as we considered them as defending in medium cover = 1 additional dice per 2 accumulated at that moment. I have put a question this same afternoon in the Yahoo Group and Rich made clear that this was wrong;  a unit can  claim cover only if frontally attacked, which wasn't the case. 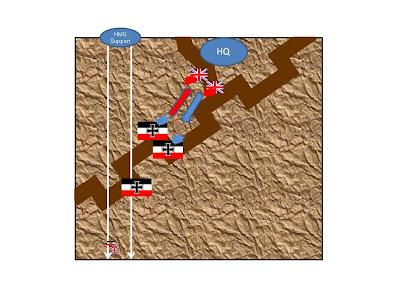 At this time both sides were in relative bad shape so decided to take a rest, concentrating first  in reducing the number of shocks and then engaging into a long exchange of fire, resulting in further attrition of boths sides. At this time the referee decided to stop the game considering that insufficient forces were availabel to the Germans to reach the HQ bunker. He declared a German marginal victory  because the number of prisioners captured.
Further comments
In my view the British made a very good allocation of resources, notably locating the HMG on the right flacnk (more exposed to a quick German approach). If anything, the Germans were lucky in placing 1 squad next to a dug-out before the British could react (in addition to a lucky die roll that force the ommies to surrender). Germans probably had to move faster, they made a too cautious approach.
One variation we introduced (not considered in the original scenario) was to put a wire line obstacle. We use the wire spotting rules and a D6 to allocate the status of the wire (1-2 = state 1; 3-4 = state 2; 5-6 = state 3). You can go further on this and use the "Task & Engineering Wrosk" rules to reduce the wire status  unisng enginners or a wire-cutting party.
As concluding remarks this scenario is enjoyable and looks well balanced; it is also suitable to train less experienced gamers (this was the case today, as we put the Germans under the control of a new comer to our club and another member that has played TMB for the second time) although I recommend that some advice is supplied from a more experienced player or even the referee.
Publicado por Anibal Invictus en 22:12