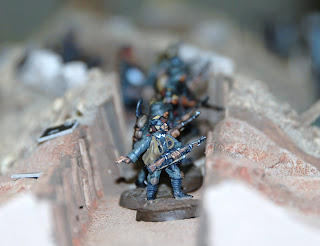 Blog's not dead!... but to maintain a fresh stream of entries it's much harder that I anticipated: family life, work, painting and a lot of reading (about the Battle of Cambrai)... difficult to strike a right balance among so many interests and obligations.
On Sunday and after a long abscence from our club, I finally arranged  a game to test the Arras scenario with the modifications of my previous entry.
Changes introduced
The first time we played this scenario, it showed to be somewhat unbalanced on the German side, which was mincemeat to the superior firepower of the two British platoons. For this reason, on the British side the main change introduced was to allow only 1 platoon to deploy initially, the second platoon being released once the trench line is reached by the former.

What I have not found yet is a convincing mechanism to introduce some time constraints for the British to be forced  moving forward to reach its objectives.

On the German side, the main change was to introduce a reinforcement section, with the idea of being released once the British controlled at least the first trench line, on the blank card.

Game development
The first British platoon deployed on blinds along the whole width of the table (see below). The artillery barrage plan was designed to basically eliminate the wire line (4 artillery turns were invested); the four remaining artillery turns were evenly divided between the first and second line trenches. 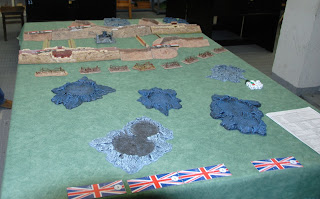 The Germans decided to place all units on the table in a forward defense sceheme, as shown in the photograph below (2 units in the first trench line, one reserve section  and the minenwerfer in the second line; the HMG in the bunkers; no units left in the rearguard area). 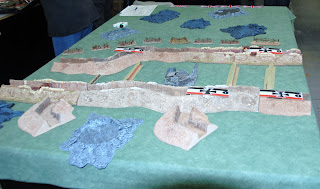 The artillery barrage indeed had a strong effect on the wire, reducing most of the line to low status or even fully destroyed, but the impact on the German units in the trenches was minimal, just sending one squad to the dugouts,  putting just a few shocks on the rest and none on the HMG.
The British advanced very cautiously, not profiting from the barrage that prevented the Germans to attempt spotting through six turns!. He also moved  too close to the first trench line the rifle grenadier section that (IMHO) should have been left in the rear and put in action much earlier.
With this and the murderous fire from the HMG located in the bunker at the center of the Geman line, the advance of the British troops was cut short suffering significant casualties and some of the sections desintegrating like an ice cream in the (Spanish) summer heat!
Therefore, the British not capable of even reaching the first line, the referee (that's me) decided to release the second platoon or otherwise we were at risk of concluding the game really early, in time to have a second breakfast that morning (not bad for hobbits but unproper for serious wargamers that meet from time to time).
The arrival of the reinforcements was  enough to rebalance the situation somewhat, but after the carnage suffered but the first platoon it seemed quite unlikely that the British were going to achieve any of its key objectives. We decided to call off the game after a few more turns and give the German the victory.
Conclusion
Key takeaways
War(gaming) is hell, but even worse scenario design. I reckon it is my first experience in this field, but never expected to be so hard striking the right balance of forces and victory conditions in a scenario (not too easy, not too challenging).
Summarising:
Next steps
I will rewrite the scenario with these final changes and put in the pdf form to retrieve. Hope you enjoy it.
Next stop:  Cambrai  1917. For those interested in this crucial battle, I recommend pairing Bryn Hammond's "Cambrai 1917 - The myth of the first great tank battle"  (the view from the British side of the hill) and Jack Sheldon's  "The German army at Cambrai"
Publicado por Anibal Invictus en 22:07