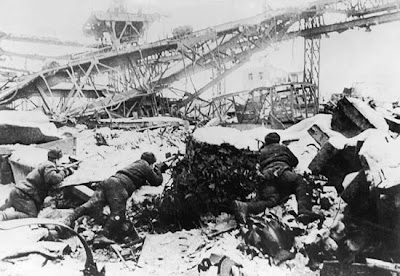 At last!!! After many months waiting, we played the first game of our summer Stalingrad campaign last weekend with our favourite rules Troops, Weapons and Tactics of the TooFatLardies company. And just from the first few turns I can foresee that a very bloody affair will develop, and not too different from what really happened in the autumn of 1942.

The setup of our game is the urban area surrounding the famous Red Barricade tractor factory. The dates 14-17th October, when the German assault scalated in ferociousness and intensity, finally breaking the Soviert army line and reaching the Volga river bank.


The gaming table
We played in a monster 3.3 x 1.8 meters  (11' x 6' feet) table, but as an image is worth a thousand words, I show now some photos taken before the battle actually started.

A general panoramic view of the table, with Alberto standing at the end to have a reference about the buildings scale... 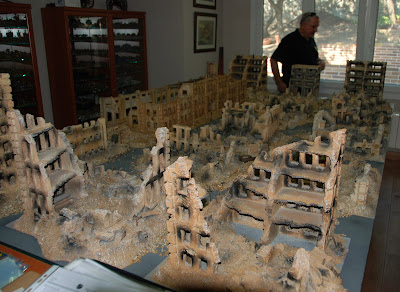 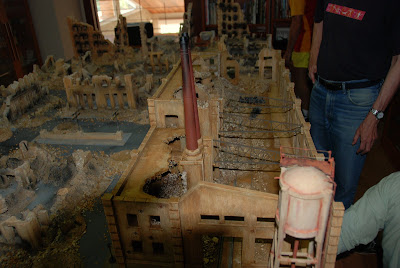 ...a devastated city and the remains of an urban bus among the debris... 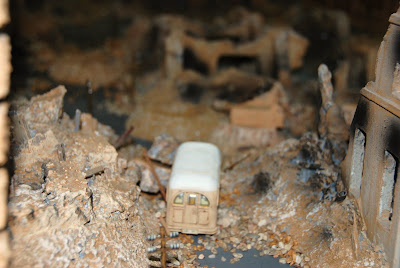 ... the factory façade, and standing behind Jose Carlos, the master builder, who kindly offered his house to host the game... 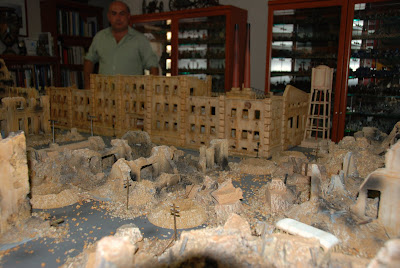 ...and a final view of the factory from another angle. 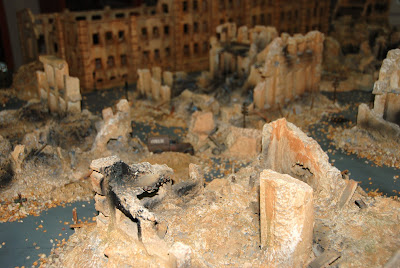 Battle development - first turns
Tha game will extend between October 14th and 17th, with 4 day and 3 night phases each day (28 "snifter card" draws for those familiar with TWT). I played on the Soviet side and our orders were to defend the Factory to the last man; as the game is in progress, I will not give today much detail about the composition and defensive setup of our forces. No fear! You will discover in future posts.

As in real life, planning and logistics activities take as much time as execution. And considering the scale of the game (company-plus size OOB at 1:1 scale) it was no small feat: we spent a good 2 hours wading through boxes full of little tin men, tanks and support weapons, organising them in squads and batteries, labelling the units and then deciding and marking our initial deployment in a map.

So it was already 8 PM when our umpire  (yes, he takes his role very seriously, don't dare to mess with him when umpiring) was ready to draw the first card from the deck... 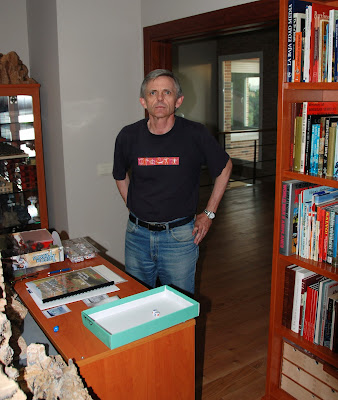 ... being a German blind that provoked real furore among its commanders... 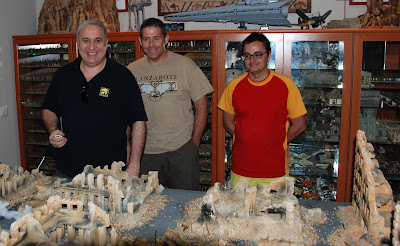 ... and then the "thump, thump" noise of a heavy mortar piece broke the silence in the deserted streets and a thick, dense, white smoke curtain fell along the façade of the Tractor Factory... 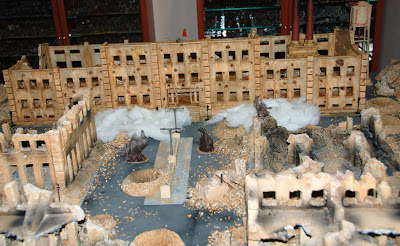 The next move saw a number of German recon teams leaving the buildings confoming their starting line... 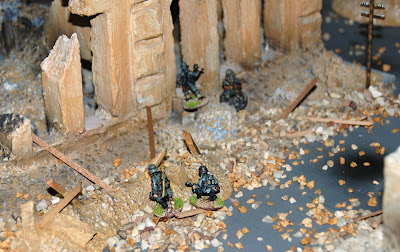 ...and crossing at full speed the street towards the line of buildings across... 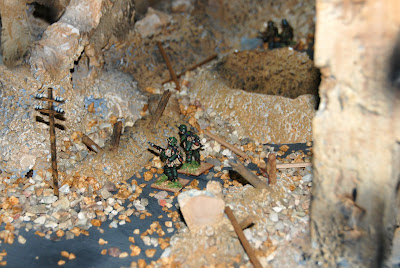 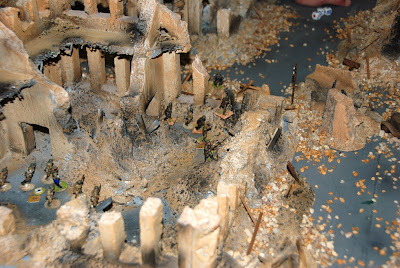 ... and forcing a hasty retreat to their own lines,  leaving their falling comrades lying at the other edge of the street. 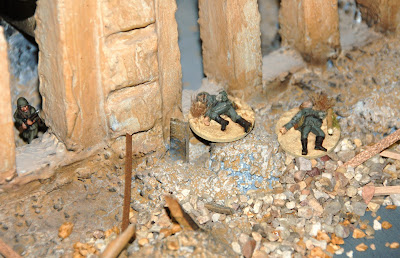 But the Soviets had little to rejoice of!!.

After a short lull in the battle, the second and the third turn saw the Germans displaying overwhelming power in the form of light and heavy machine guns... 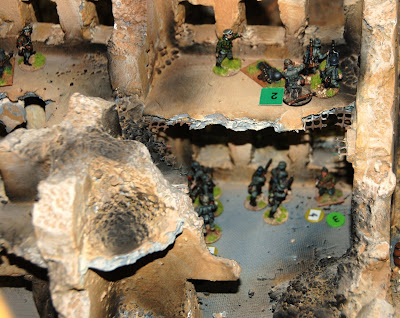 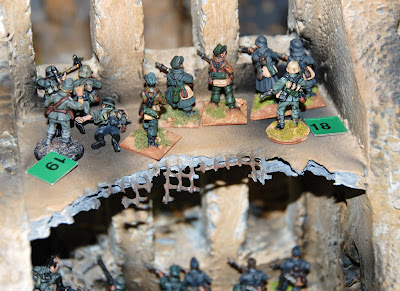 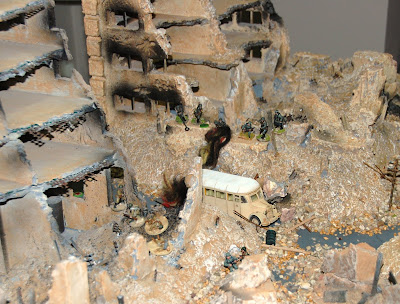 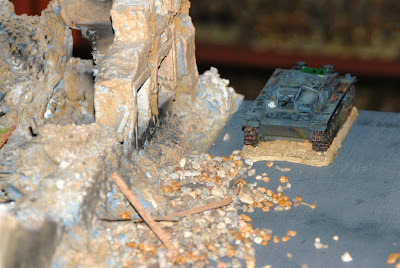 A storm of lead and fire poured over the defending Soviet troops over the next 2 following turns, suffering a large number of casualties ("6" results on the dice were haigher than a normal average) and mounting shocks ... 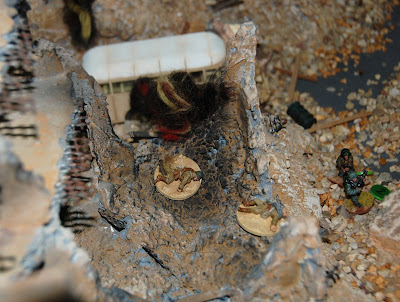 ... prompting some squads to rout and flee towards the Factory, despite the frantic efforts of the Soviet commissars (pistol in hand) to maintain the line. The responding fire over the Germans was in no way as effective, lacking support of HMGs or mortars, and being the LMGs clearly inferior to the MG42s. 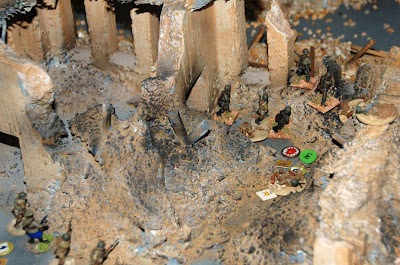 After the third "snifter card" night fell (and literally, as it was 11PM by then!) and we decided to stop the game. The Germans in clear high spirits in the light of the carnage made... the Soviets with mixed feelings, as out of the 3 houses defended, 2 had been or were about to be overrun.

A truce was signed, fallen bodies were recovered and mourned,  and the commanders sat to plan the next moves, while their orderlies prepared a light-cold dinner.... 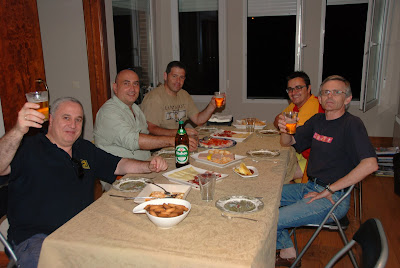 Err... well... I may be exaggerating a little here... our host José Carlos and his lovely wife surprised us with a table of tasty Spanish tapas and a large stock of beer (too hot for Rioja in the Madrid night). And in such cheerful mood we concluded our first game

Agreement was reached to play the next leg of the game on Saturday 20th August. Expect a new report from the front the following week.

... and the Red Flag still flies over the Factory!!! 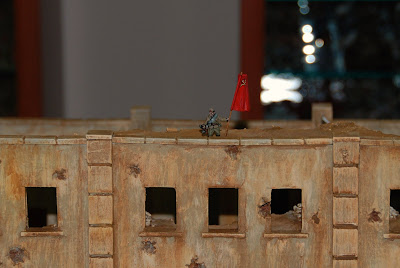