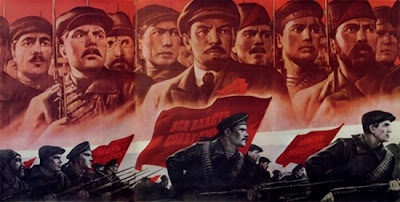 After missing the foruth game of our campaign, I could attend the fifth game, played on a Friday evening two weeks ago,  although I was totally exhausted after a full working week (and not just me, but the rest of the gang too). To remind readers and blog followers, we prepared this year a campaign around the last German effort to conquer Stalingrad in October 1942. Although it was supposed to be played through the summer, the fact is that it has extended well beyond our estimates and it's now clearly heading into winter...or as one member of the TooFatLardies Yahoo Group told me a few days ago "funny how history repeats itself"... and I cannot agree more!
The fourth game ended with the Germans making a double pincer flank-approach to the Russian defending line, probably with the idea (remember I play the Red Army side, don't know in detail the evil Boche's plans) of avoiding a front assault on the Factory building (the key victory objective of the campaign).

The game Last Friday Night (...I'm a Katy Perry fan too!!...) was one of the most disputed, with the Germans forces bleeding high again and putting additional friction on their progress to the factory. If the first two games were not very favourable to the Red Army, now our moral is now signficantly high... ALTHOUGH there're still a lot of turns to play and we can see new reversals of fortune.

The key actors in the drama were the workers militia and the snipers, the latter being extremely accurate this time, killing a senior Big Man and pinning for several tea-break turns a two German squads dangerously close to our line last of defence,  rendering them ineffective for most of the game.

But as I said, the real stars that night were the worker milita squad. If in the previous game  they tried at least three times to put a Stug on fire with the Molotov cocktail bombs, after exhausting its allocation of flammable Vodka, they decided to make a heroic feat and to die to the last man killing as many Germans as possible.

So here you have these brave heroes attacking almost bare-handed  a professional German army squad... 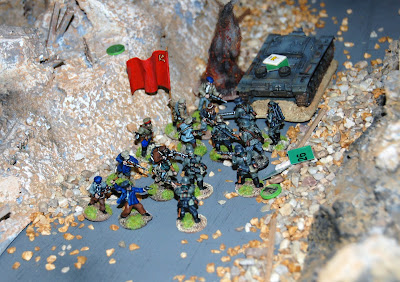 ... routing them with high casualties (including a senior Big Man) while fleeing to shelter in a nearby building debris... 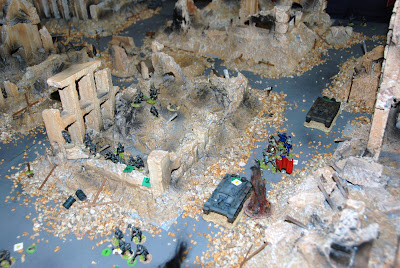 ... and after resisting unharmed a close-range shell of the nearby Stug... 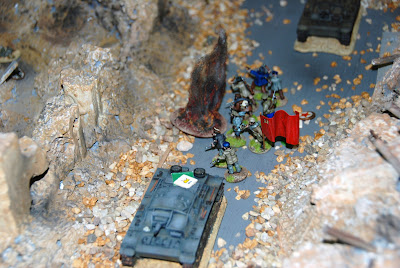 ... a second Urrah card enabled them to repeat a close attack on a new  German unit (too much Vodka ingested? May be that explains why the Molotov cocktail allocation exhausted so soon...) 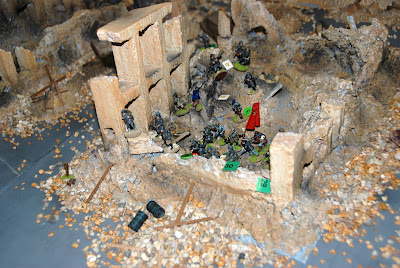 ... ending as anyone could have expected in a bloodbath, with the unit fleeing into the street, supressed, and then a merciless crew of a German tank run  them over. 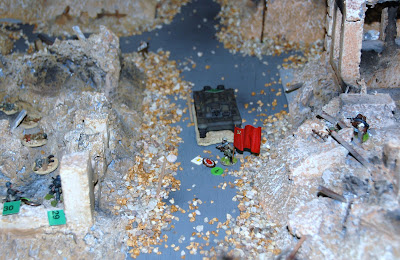 But the sacrifice was not in vain. This attack combined with the fire of the HMGs hidden in the nearby buildings... 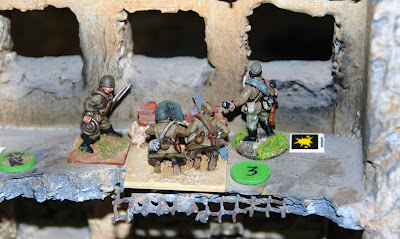 ...and some well aimed shots from a sniper brought to a halt the German attack. In addition, one of our T 34 scored its first victory, catching a German Stug by the flank when it was trying to reach a hull down postion  behind a previosuly destroyed Red Army tank. 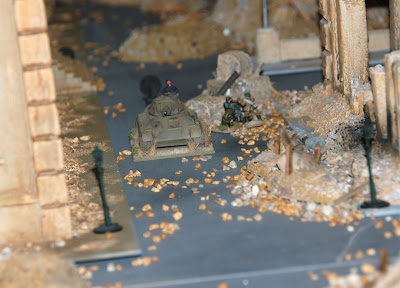 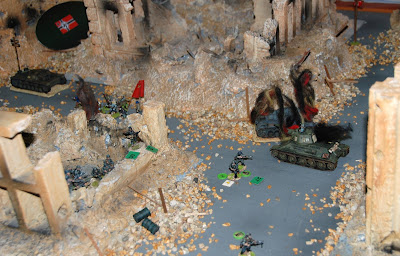 In the left flank however, the Red Army forces continued suffering additional set-backs. A very powerful engineer unit reinforced with a flamethrower team advanced almost unopposed to the last line of houses in previous turns and was now very close to the corner of the factory. We placed one of our reinforcement squads hidden in one of the buildings, with the idea of ambushing the Germans by the flank. 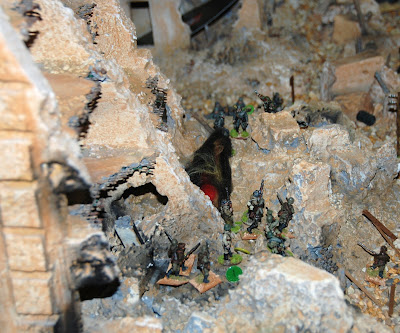 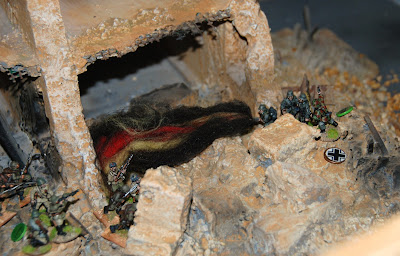 ...and the gallant squad was "grilled" and supressed.
After a 4 hours playing, in a Friday evening with everyone noticeably exhausted after a working week, we decided to call of the game. Not a bad outcome for the Russian in the right flank, the Germans are showing sings of exahustation; the left flank is however not holding well and some German reinforcements (in blinds) are now crossing the street. This preludes a bloody final fight for the factory.
Publicado por Anibal Invictus en 20:57