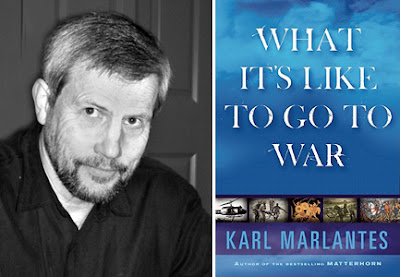 Karl Marlantes was 23 years-old  when he served his first tour in Vietnam as a Lt. in the Marine Corps. As many other veterans, after his return Marlantes has been fighting another more personal and darker war with the ghosts of the past, now for 40 years. His first book "Matterhorn", half novel/half memoir, tells the story of a recently arrived in-country, young Second-Lt leading the First Platoon, Bravo Company, First Battalion, Twenty-Fourth Regiment, Fifth Marine Division, and has been acclaimed as one of the best books about the conflict.

Due to my recent interest in the Vietnam war, this weekend it did not go unnoticed a short review of his second book in the Financial Times, this time not a novel but an essay about the paradox of a society increasingly improving the technical skills of its armed forces to kill the enemy  but providing almost no support to help these men to confront the deep emotional scares left by their actions:

"Part memoir, part primer for the modern warrior and part exorcism of past ghosts, What It Is Like To Go To War is brutally honest, clear-eyed and necessary. “The Marine Corps taught me how to kill but it didn’t teach me how to deal with killing,” writes Marlantes. It is the spiritual toll that killing took on him that he has struggled with and believes modern soldiers are woefully unprepared for – resulting in post-traumatic stress disorder, substance abuse and often suicide."

Downloaded into my Kindle and now having read half of the work, I can assure that it provokes real discomfort. A clearly superior work to the Keegan's or Holmes' covering the effect of combat on individuals, now from someone with first hand experience.