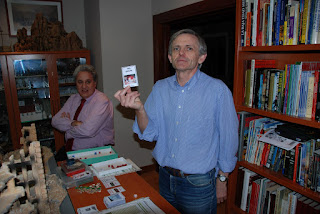 Some of you may remember the fantastic Stalingrad Campaign played with my wargaming mates, that I blogged in detail between July 2011 and its conclusion by March 2012. Then I planned to make a final entry in this blog with a post-mortem analysis of the campaign, bringing together the "after the battle" views of the umpire and campaign organiser, as well as those of the German and Red Army commanders respectively. Finally I got only feedback from Alfredo, the umpire (the guy in the photo above); nothing to blame on the other guys, the truth is that we all have a very busy life and can hardly cope with all our obligations. Read now Alfredo's remarks and comments.


1. What made you think about Stalingrad (a difficult urban-based environment) for a wargaming campaign?
The idea sprang to my mind one day visiting Jose Carlo’s house (note: José Carlos is one of our club mates and  acted as our host along this game, played in his home’s gaming room). He had already worked for a long time on an impressive array of destroyed  buildings and post-atomic urban  landscape, initially to be used for his Warhammer 40K games.
I mentioned to him casually the idea but he immediately fell in love with it; and in record time he built the most impressive building used in the game (The Red Barricade Factory)  and also the objective of the campaign.
The next step was to find suitable OOBs,  finally provided by a Flames of War  (FOW) supplement , built around the historical organizations for both armies.
And finally the rules. We had been playing for a long time with Troops, Weapons and Tactics (TWT) of the TooFatLardies factory. Although they were intended  for games at a smaller scale (platoon-sized)  that I initially  had in mind (company to battalion sized) they offered  the advantage of being very flexible and that all players were highly familiar with them.
One aspect that was not covered by TWT was the sewer fighting, which historically was relevant in Stalingrad and I thought would add a lot of fun to the game. Luckily, a few months  before we started playing Charlie Don’t Surf (the Vietnam-era rules also from the TooFatLardies) where I found a simple but really effective mechanism to play the tunnels war.
Finally I decided to create a table of random events. These would be activated by a blank card, affecting the latest active side and being resolved with 10D throw result. It was an additional element to create uncertainty to the players, and I think it really worked well.
By spring last year I had all the ingredients. I worked a few weeks adapting the FOW OOBs to TWT, providing some more detail at the lower echelons and weapon support units, and by the beginning of the summer we were ready to fire the first shots.

2. Any comments about the initial deployment?
The German was a text-book attack plan. As the Red Army forces deployed initially hidden, he decided to attack on three axis (flank and center) and to hold a strong reserve force until the weak spots of the enemy were uncovered.
The Red Army player opted for an in-depth defence, hoping to wear out the enemy troops in the line made by the buildings in the central part of the table, while reserving the crack units (veteran SMG squads) for the last defence line at the factory building.

3. Main errors/sound decisions observed along the games
On the German side: a very successful and skilful use of the infantry and support weapons sections, who really mastered the field until the second half of the campaign. On the minus side, the use of the panzer units. In my view It was a mistake to spread the tanks along the line and were never in a position to really force the hand on the Red Army forces.
On the Red Army side: the initial deployment was a catastrophe and it almost made them loose the game in the first day; the units entrenched in the center of the table were literally wiped out   (note: as Red Army player, I admit that we underestimated the fire power that the Germans could put upon our troops). On the plus side, the effectivge use of the off-board artillery was critical to regain some balance, as it pinned down the German main reserve force  to be used in the final assault on the factory. The casualties and accumulated shocks prevented any organized attempt to attack in force the objective. A final  remark is that the Red Army units bevaved like in the historical records, defending the positions until the last man and counterattacking as soon as they had recovered enough; you may remember in that sense the heoric feats of the workers militia unit!.
PD: for those interested, in the files section of this blog you will find the OOBs in word format and an excel spreadsheet to track the casualties of the different units used in the campaign. The map is simple, you only need to have enough destroyed buildings and a factory o objective building at one sode of the table.