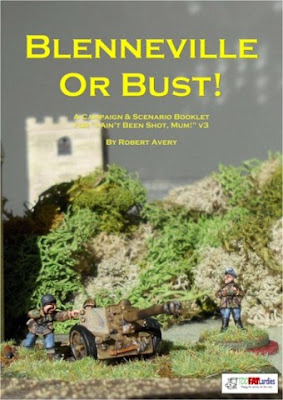 New announcement in the TooFatLardies Yahoo Group this midday: a new scenario book called "Blenneville or Bust" by fellow Lardie developer Robert Avery  (a nice chap who I happened to meet in April at Salute). I bought my copy tonight and got a monster 300 pages electronic book (pdf) with 31 individual scenarios for IABSM, interlinked in a campaign format, involving US, British and German forces just after the D-Day landings at Normandy. Fromthe introduction:


The campaign described is fictional, both in terms of setting and the units involved, as what I have attempted to create is a generic Normandy campaign that allows either a series of linked games to be played, or provides a collection of one-off battles for players who do not have time to create their own scenarios (....) There are thirty-one individual scenarios in this booklet laid out in pyramid format to five levels: scenario 1 leads to either 2A or 2B, which lead to 3A/3B and 3C/3D respectively, and so on until 5A through to 5P.

No two scenarios are the same, although the same ground may be fought over with different opponents or from different directions. For example, the three-way road junction near Avaux features in three scenarios on the fourth level of the pyramid but fought north to south; south to north; and west to east; with German fallschirmjaegers defending against British armour; US infantry and US armour respectively (....)

Blenneville is a small town at the head of the Ribeaux valley that runs on the same axis as the Allied advance from the Normandy beachheads. The Allies are therefore seeking to drive south down the valley towards Blenneville and break out into more open French countryside, whilst the Germans are trying to first stop them and then drive them back to at least Neuf-Foix. The action begins west of Pierrecourt: another small town about half way up the valley.


Although tailored to fit with IABSM, the OOBs in Blenneville provide some very detailed  information to be played with any other comapny-sized rules in the market. And at GBP 9.50 I think they are a no brainer.