Desert Campaign Game # 2: When the DAK melted like ice in the heat 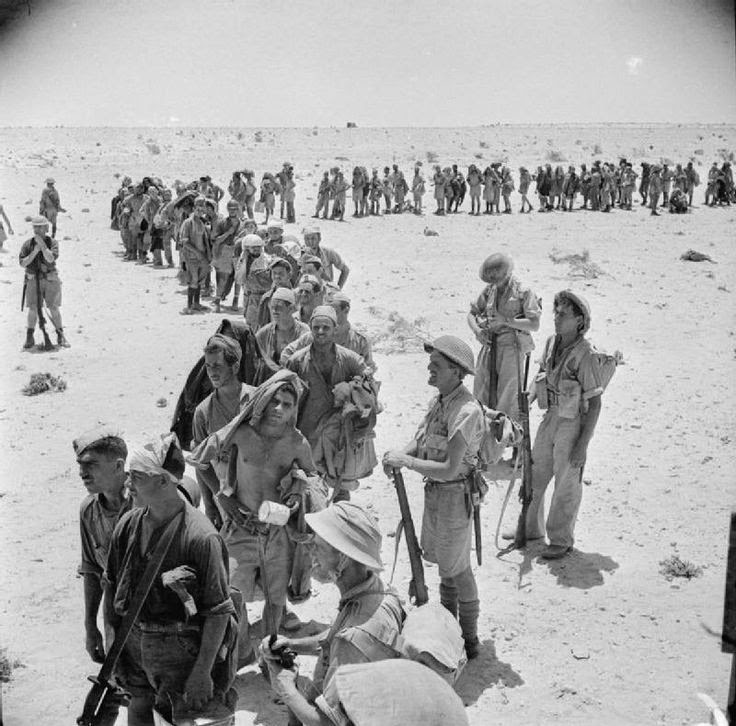 The second game of our Desert Campaign resulted in a total disaster for the Axis player, whose DAK platoon received a severe punishment and lost almost a full section. This time the Indian troops were much more cautious than in the first game and took revenge from the shameful rout suffered.

The Axis players decided to take a defensive stance and not counterattack;  they had one DAK and one Italian infantry platoons, this time supported by an anti-tank section instead of an armoured platoon. The ATG section had one 88mm guns and two Pak 36 guns.

The table was similar to that of the previous game: the Axis deployed on the left of the map below, in a  position at the foothills of a defile in the desert; this side of table edge  is dotted with hills (up to two levels) representing the area just outside the gorge. The Empire troops should move in a relatively flat terrain before reaching the enemy positions. 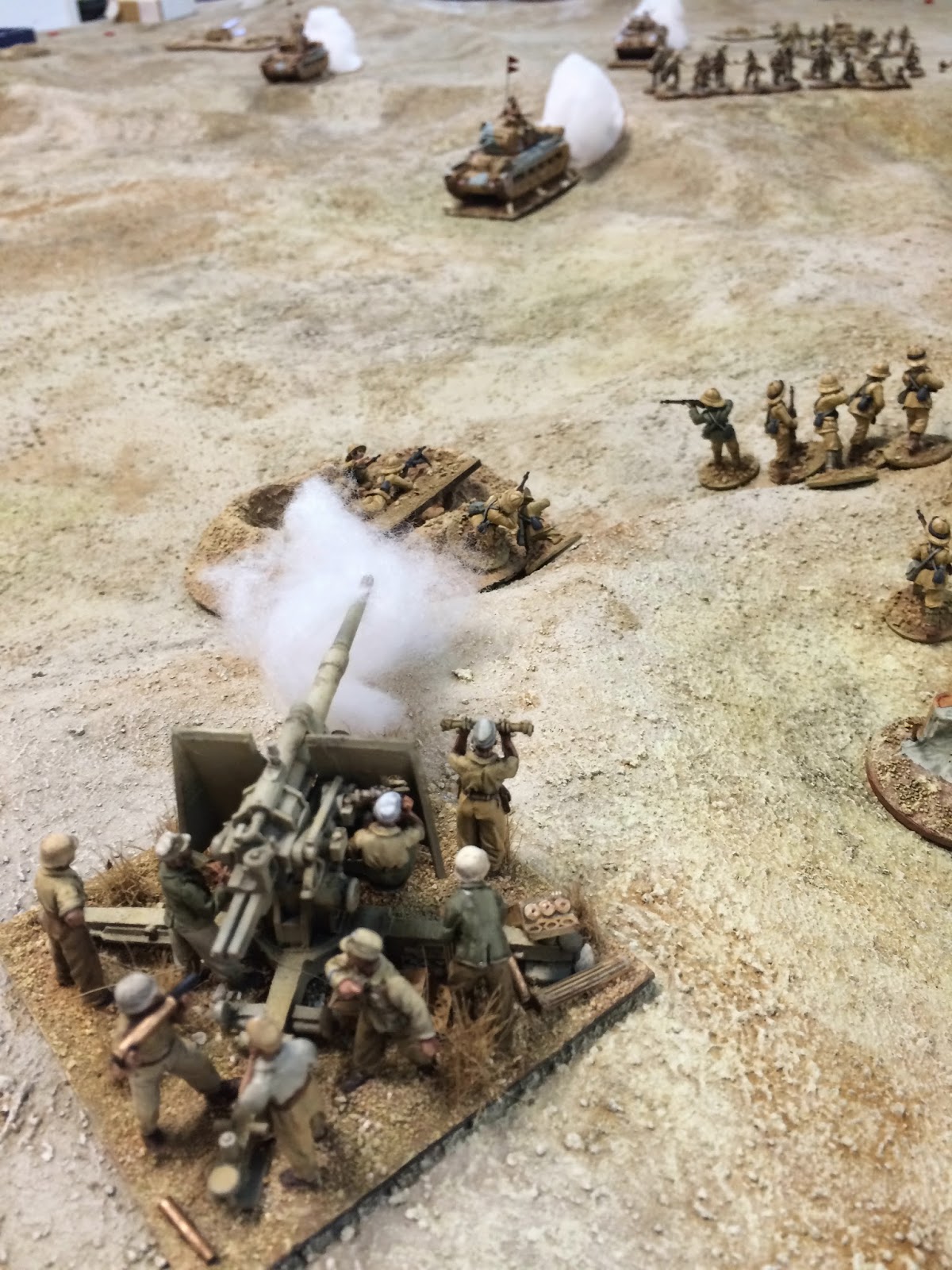 The defenders plan was simple: Italians on the right and Germans of the left, the ATGs  to be placed according to how the tactical situation will evolve. As in the previous game, the British troops decided to go for a fast deployment, but that was the only resemblance to the first battle: with the lessons learned, the troops used all cover possible from terrain and made a liberal use of smoke from the mortars and the hand grenades to cover their advance. Armour support was also close at hand to both units... what they did not know was that the Axis had no armour assets but a section of AT guns.

The game developed soon in two different battles: on the left side the Indian platoon engaged in an exchange of fire with the DAK at medium range. On the right, the Italians made a fire line and waited in overwatch for the Desert Rat infantry to decrest the hills in front. 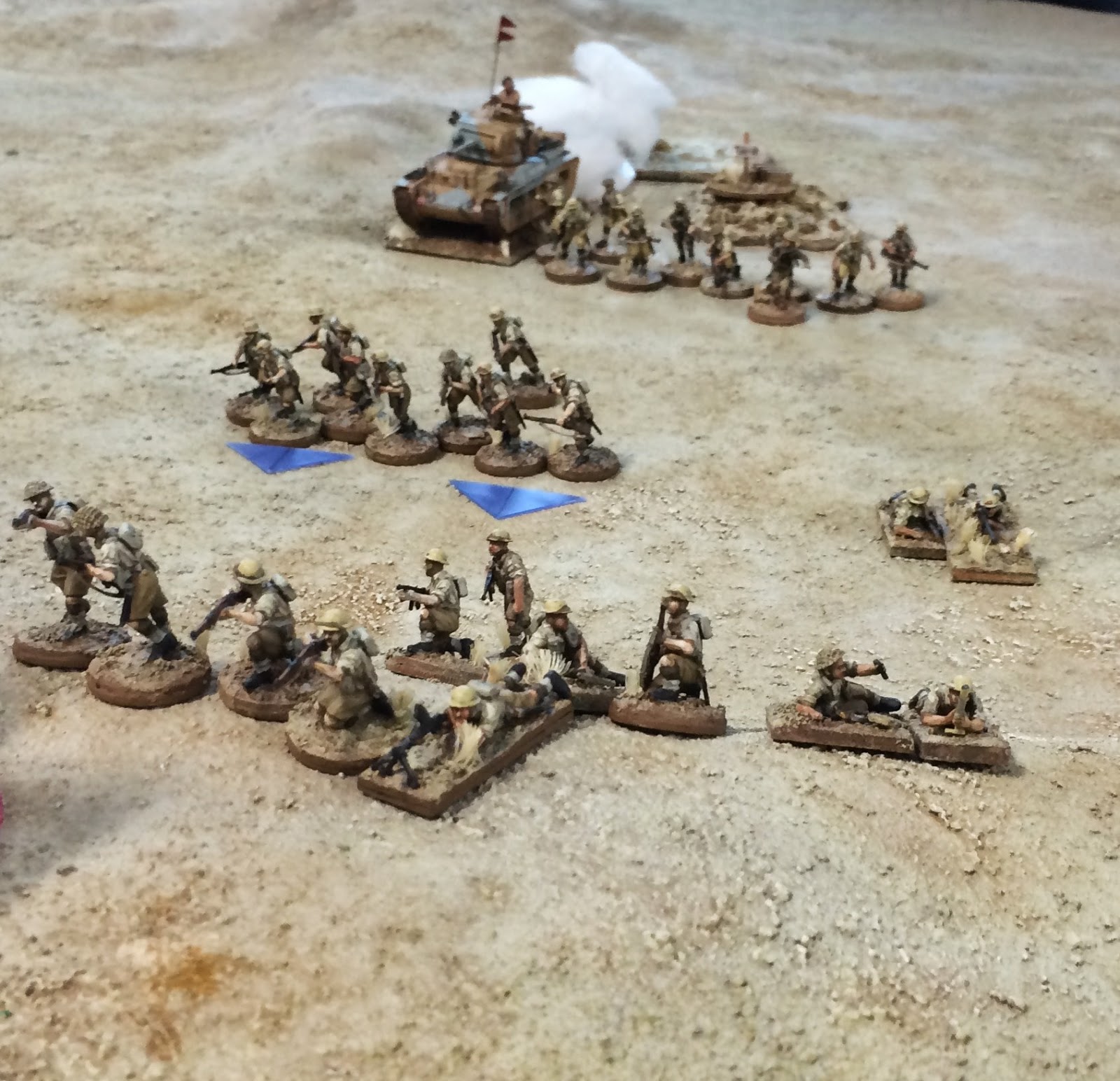 The British tank troop was divided to provide support to both wings; but the main thrust was put on the side defended by the Italians. As the German armour did not seem to be ina  hurry to show up, the British launched one of the Crusaders on the Italians to threaten their line and forced the Axis to deploy its tanks... but instead what emerged was a dreadful 88mm. 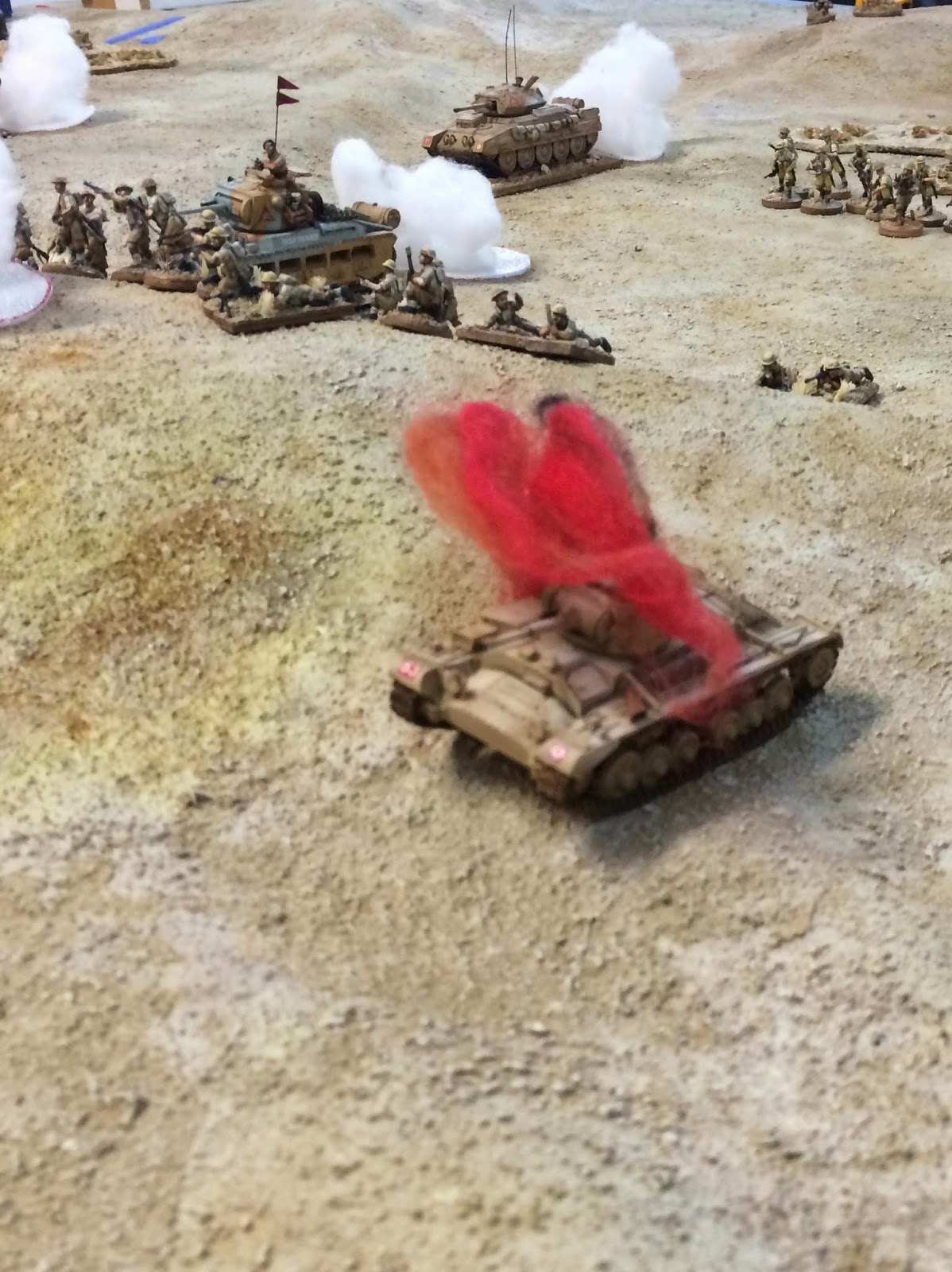 The Crusader was quickly dispatched and now the gunners sights were put on a Matilda moving nearby... but it seems that Hauptmann Magoo was again commanding the gun and failed to hit the British tank. Nonetheless, the 88mm clearly provoked fear on the British tankers, who thought that taking cover was a good alternative and stop the attack, launching now the infantry instead and activating a support mortar battery. 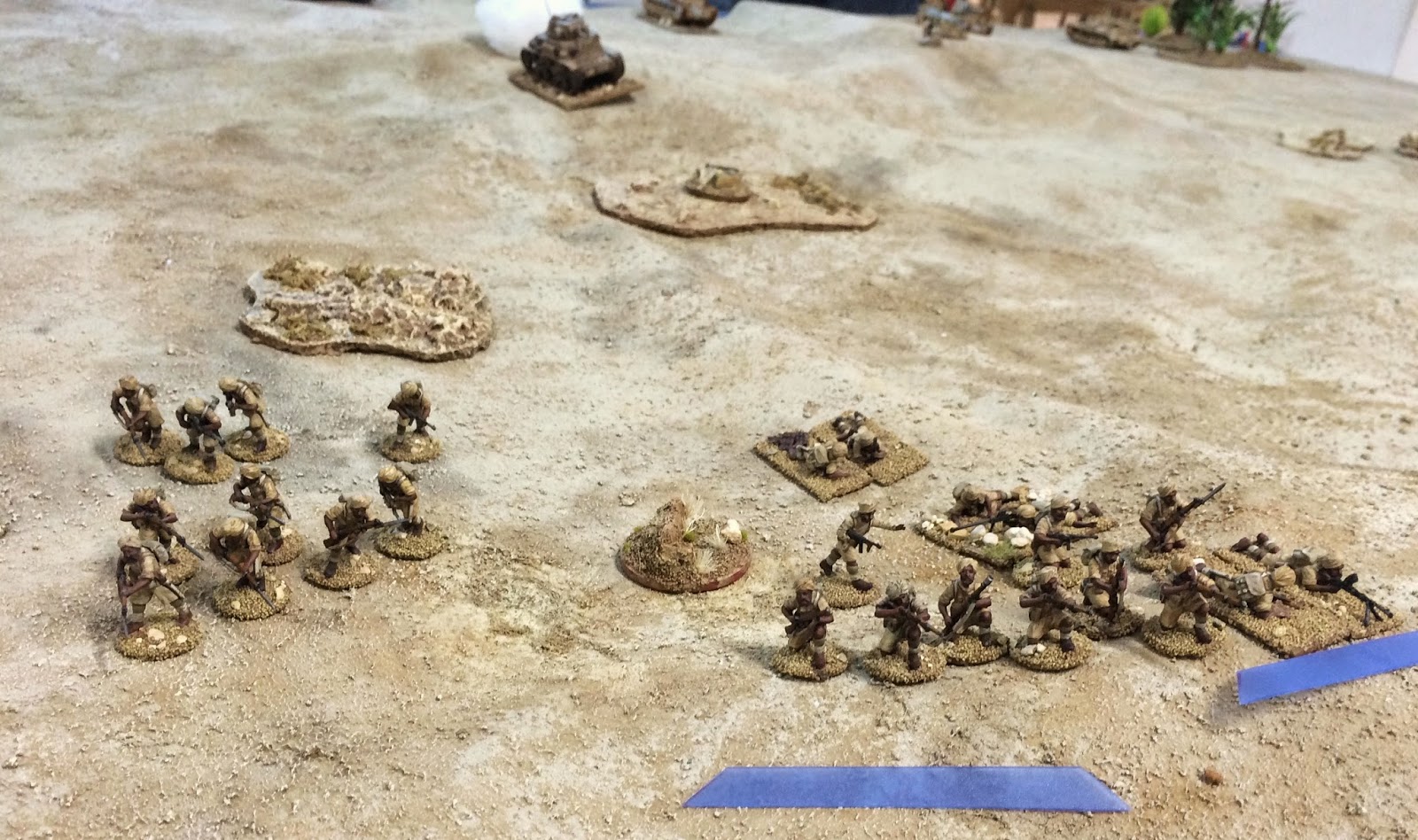 In the meantime, on the other end of the line, the DAK infantry was suffering a murderous fire from the Indians and casualties and shock level was starting to mount. Luckily the British decided to put some smoke in front of the enemy to cover a new advance, to the relief of the beleaguered Germans.

However, disaster stroke in that moment over the Axis camp: the Italian player (ahem!... me, covering a player who failed to come today)  decided to end the turn with a Chain of Command dice to lift the mortar barrage threatening its line and the 88mm... but it also lifted the smoke screen in front of the Germans. As the next phase was British (getting two consecutive turns) the German unit was caught in the open and butchered. 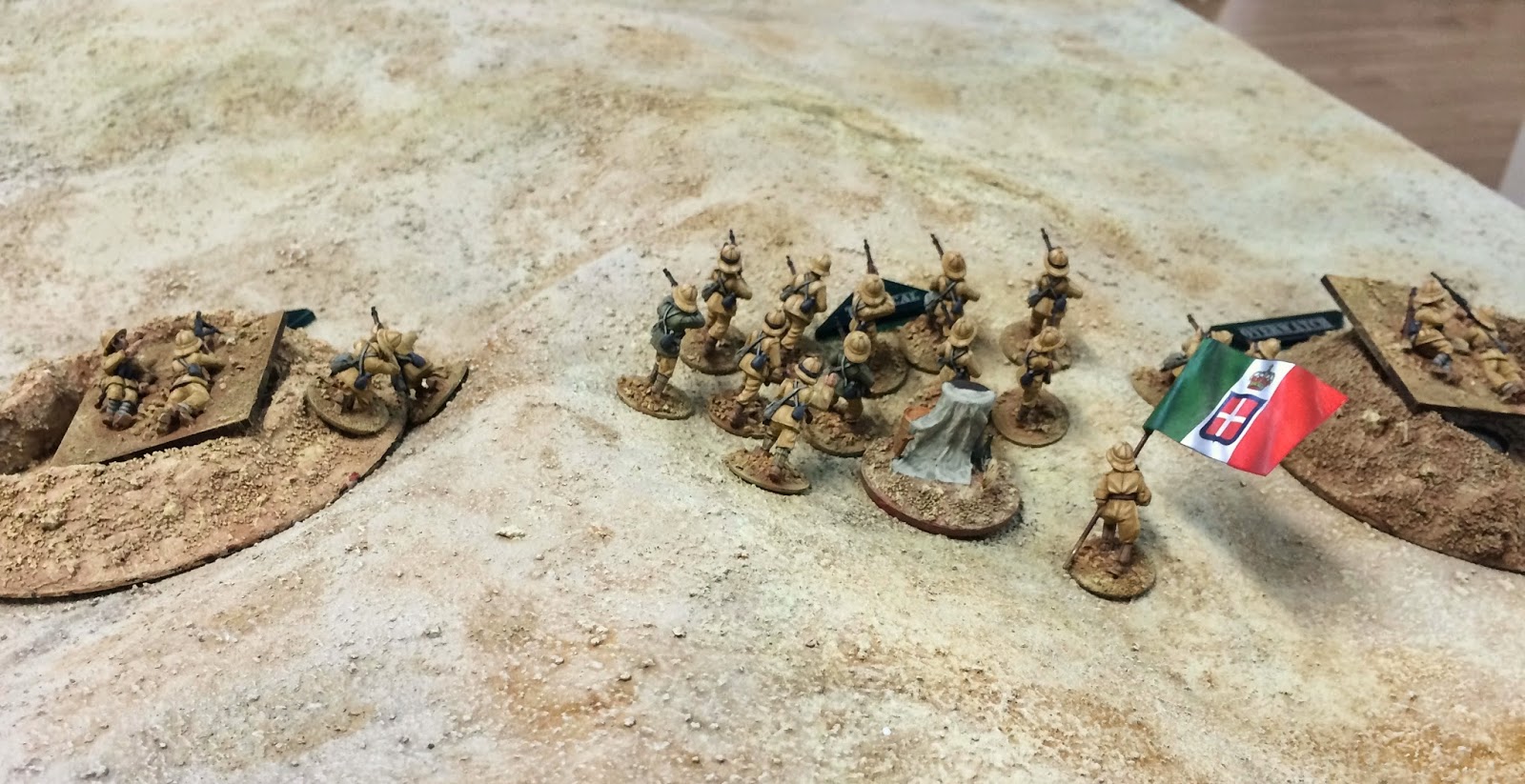 The moral level already low because of the previous fire exchange, now fell below 4, creating a negative chain reaction in the Axis field: the loss of command points of the DAK forced morale rolls on the Italians and the ATG sections, who also lost command points...prompting additional moral rolls to the DAK... losing more command points and forcing new morale rolls to the rest of tropps...  and so on, until the DAK moral fell to zero and the survivors routed, dragging with them the Italians and the anti-tank sections. 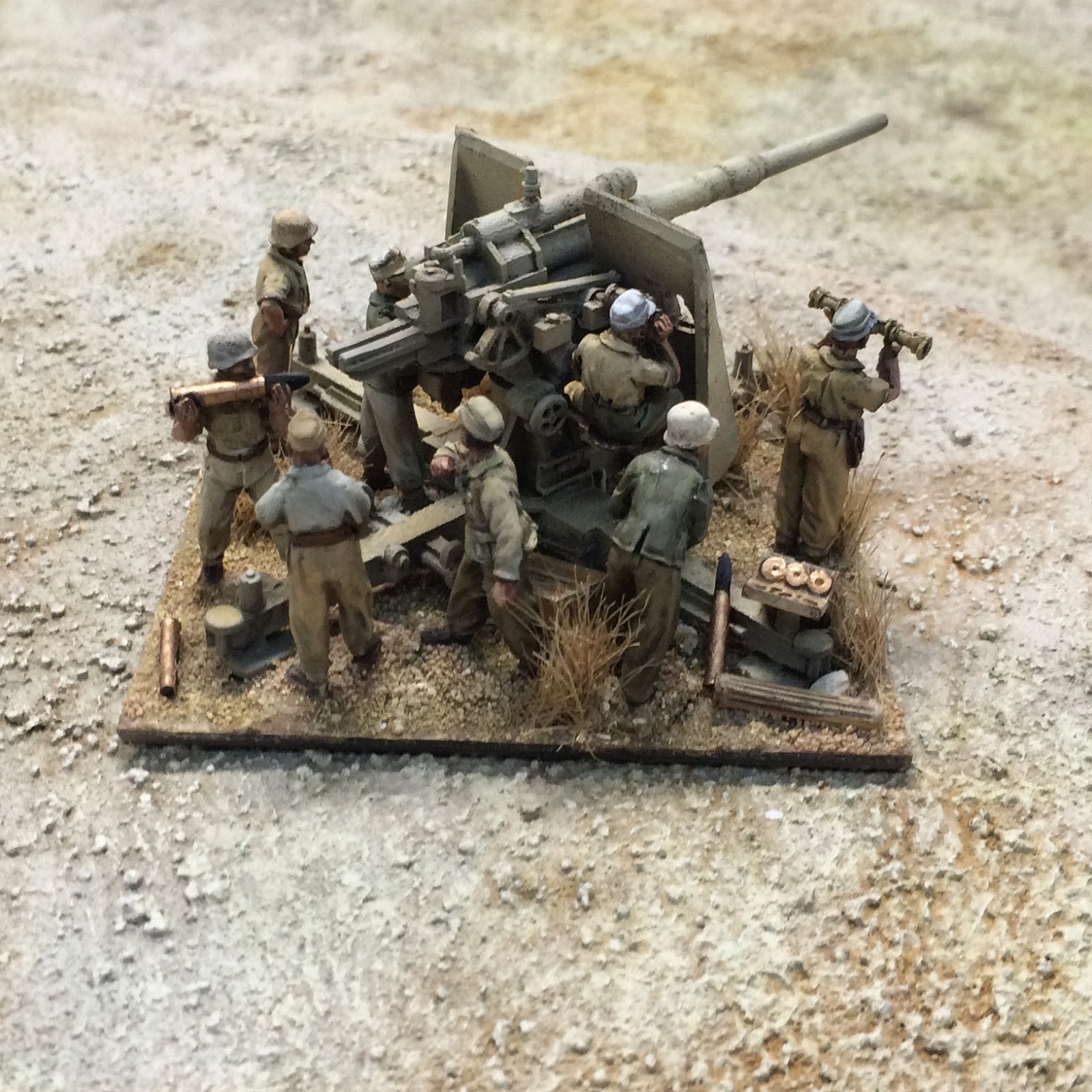 The whole Axis line crumbled like ice sugar and the men flee for their lives. A stunning British victory, moving into the next game with a strong advantage in men and materiel over the Axis! 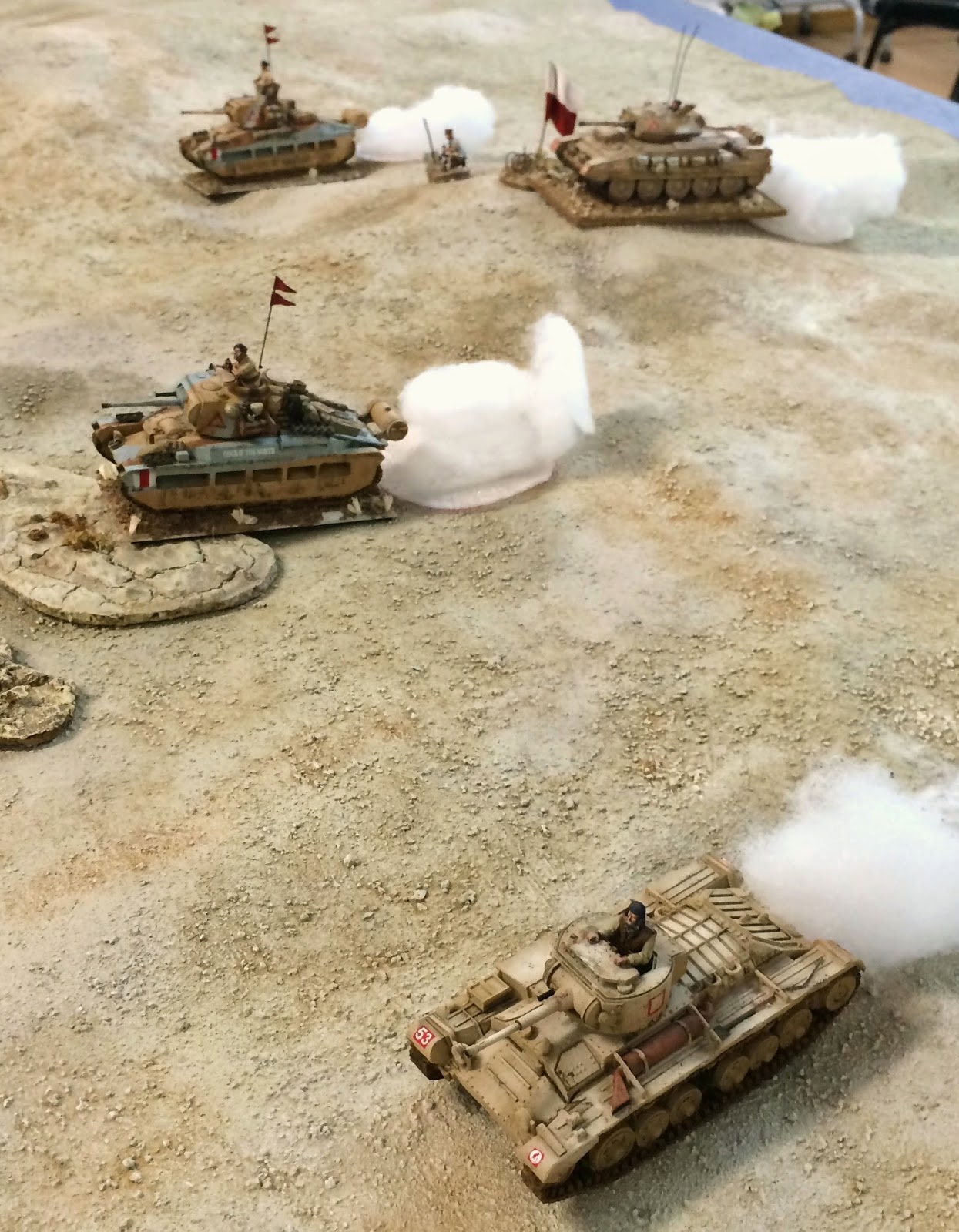