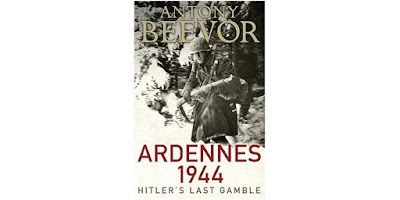 Just finished this afternoon reading the latest book from Beevor on the Batte of the Bulge in December 1944. I bought it with some trepidation, as my gaming group is planning to vost the area in November coinciding with the Crisis 2015 event in Antwerp.

Alas, I must say that the book  is just okishh... at all  as engaging as I can remember when I read Stalingrad in the late 90s  or the Berlin book a few years back.

Truly the most interesting part for me was the description of the political mess between Monty, Bradley and Eiseinhower during the battle; specially Monty gets a beating from Beevor as he created unnecesary tension in the Allied Supreme HQ at a critical military moment, due to its ambition to put the American armies under his command. This brought huge embarrassment to Churchill personally, who had to come out in public supporting the Americans vs. the reading that some British newspapers were doing (in most cases with Monty behind the scene) and arguably eroded a lot of the political capital of the British to have a significant say in the Yalta summit and the organisation of the new world order post-conflict.

From the perspective of a military history aficionado I cannot say the book truly adds much new to what we already know about the battle, or at least no to me. The operation was doomed from the very beggining due to lack of realistic supply planning and although the Americans were caught wrong-footed, the tough opposition and the speed of reaction of the Allied armies were totally unexpected by the German high command. Unnecessary book in this sense.

As usual this is my personal opinion, but will rate it with just 2 stars out of 5, coming from someone who have read (I believe) almost every work published by Beevor so far... happy nonetheless to read other points of view.
Publicado por Anibal Invictus en 20:05