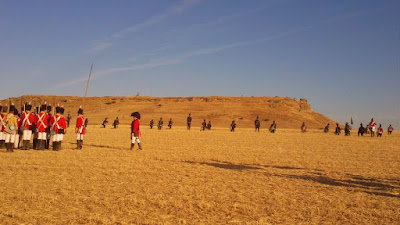 The following is a scenario for the popular skirmish rules in the black powder era Sharp Practice published by TooFatlardies in the context of the Salamanca campaign in 1812 won by Wellington's allied forces.

Background
Before the actual battle of Salamanca (or “de los Arapiles” as it is known in Spain) was fought, on 21st  of July 1812 the British and the French armies spent several weeks following closely each other looking to exploit a moment of tactical advantage to defeat the enemy in force.
Since the end of June 1812, the theatre of operations had moved north of Salamanca, to the Duoro river line where both armies try to outmanoeuvre the enemy during several weeks.
Marshall Marmont finally caught Wellington out of step in a faint move in which the French crossed to the southern bank of the river, posing a flanking threat to Wellington and also potentially cutting the line of retreat to Salamanca and further afiled, to Portugal.
On July 17th, Wellington ordered the army retreat towards Toro; the objective was to move from there via the north-south road that links this city with Salamanca. The retreat continued during the 18th reaching by mid-afternoon the line of the Guareña stream, a small tributary of the Duoro. The British crossed this small river unopposed and formed a line along the west bank, supported on the village of Vallesa on the right.
Considering the position sufficiently secured and the late hour (around 4PM), the British were ordered to prepare the camp for the night.
However the French thought differently and spotted a good opportunity to cross the Guareña at a lightly defended position on the left of Wellington’s line. This move if correctly executed will allow a flank attack on the British and allied forces.
Orders were distributed and Clausel sent Taupin’s 6th division across the Guareña at a ford north of Wellingtons left flank, while Carrie´s Dragoon brigade (reinforced supported by several artillery pieces and an infantry battalion) was sent immediately across to protect Taupin’s flank.

Facing Carrie’s forces were elements of Alten’s light cavalry brige (1st KGL Hussars and 14th Light Dragoons). The British were caught totally by surprise, as the French Dragoons crossed unopposed, had enough time reform the ranks and charge, routing the Hussars I state of panic.

Le Marchand’s heavy cavalry brigade nearby came to the rescue in no time, countercharging the French and restoring the line. In the confusing melee, the French forces were put to flight and Carrie (leading from the front) was wounded and captured.
While the cavalry charges and countercharges were taking place, Taupin’s infantry had also crossed the Guareña and moved at good pace towards an elevated position in front, apparently unoccupied by the British.

The fact is that Wellington was already in the area, ordering Cole’s  4th infantry Division to parry the French  move. While the French was ascending to the top of the knoll, the British 27th  and 40th Regiments had already deployed and were waiting the French to decrest, with the Portuguese of the Staub’s brigade in support (in total over 3,000 men).
In the typical British fashion throughout the Peninsular wars, the British line waited quietly for the French to approach, discharged a deadly volley at short range and charged downhill…   the French retreated and corssed back the Guareña in absolute disorder.
Despite this victory an exhausted British army after several days of marching and countermarching, refused to pursue the French and were just happy with consolidating the initial positions.


Deployment and scenario considerations
The game will be played as a “Scenario 5: Attack on an Objective” of the main rules book (page 75).
The French will roll for supports as indicated in the scenario adding the 2 points for the Army points difference. Both players will have to invest in a secondary deployment point attached to the respective cavalry forces.
Alten’s Light Cavalry force will be deployed in the area A of the map, not closer to 12” of the British tactical edge; the cavalry status is standing/halt. This cavalry force will remain inactive until the Tiffin card following the first activation (note: not deployment) of the French Dragoon forces. This reflects the unpreparedness of Alten’s forces to meet the French attack.
The British player will place the main deployment point according to the Scenario 5 guidelines and the secondary deployment point (cavalry) immediately after, anywhere on the table but within 6” of its own tactical edge.

Once the British deployment points are set, the French player will place his deployment points:  the main will follow the Scenario 5 guidelines as in the case of the British; the secondary (cavalry force) will be placed anywhere on the table within 6” of the east river bank. The latter reflects the historical speedy crossing and reforming of the cavalry force (note: Dragoons deploy up to 12” distance of its deployment point; placing the DP within 6” of the river allows the Dragoons to emerge deployed on the British side of the river).
Neither British nor French units will start deploying (except Alten’s light cavalry group) until the French Dragoons have been deployed.

Map and terrain
This scenario attempts to refight the action onf 18th of July 1812 The attached map represents the key features of the terrain where the battle took place.
The Guareña river was apparently fordable at any point although with some difficulty. July is in the middle of the Spanish summer dry season and therefore the water level run low. For scenario and movement purposes all the river line is  broken ground. 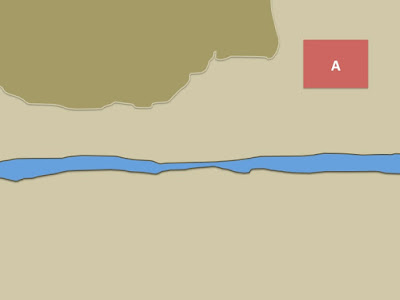 The slope to the top of the knoll depicted in the map will also be considered broken ground.
The terrain is basically flat, dry and featureless, typical Castillian landscape. The area can be dotted with some trees but unlikely to offer any protection (except a shadow from the sun) to the forces on the table.
The photo introducing this blog post although not in the battle site (it is actually one of the Arapiles in Salamanca) illustrates the type of landscape where the fight took place.

Reading suggestion
This encounter is described in detail in Rory Muir’s “Salamanca- The Triumph of Wellington”. With over 350 pages, this book is in my opinion the best published about the battle and benchmark of how to write military history.
An interesting work is also the “Salamanca1812” published in thee Osprey`s Campaigns series; however this battle is not considered in any detail in it.
Publicado por Anibal Invictus en 17:48