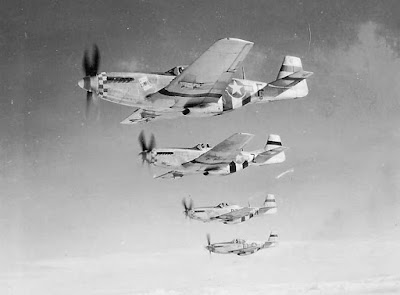 News that the heads of the assault columns are now in the jump-off positions and ready to take on the arguably unprepared US troops near the railroad line (area code name Orange 1) are received with satisfaction at the Das Reich regiment HQ.

Suddenly the deafening noise of aircraft engines flying at low level fill the air and the dreaded black and white stripes of the Allied air force the German officers eyes ... luckily the planes pass away leaving the HQ unmolested, but almost immediately machine gun and bomb explosions are heard towards the jumpoff area followed by black smoke columns .

A devastating air attack has dispersed the German forces, with the units running in panic pursued by the Allied Typhoons and the Mustangs. After what looks like an eternity, the planes finally leave and it's time now to take stock of the damages and regroup the surviving forces. The attack is cancelled and will be postponed at least for the following day.

And this is how the first turn of the Hickory campaign ended... played without placing a single model on a wargame table and actually resolved by Whatsapp! Let me explain what just happened.

As commented in the previous post, there are three attacking routes and the Germans must select one; the Allied had an air interdiction asset that had to be allocated to one of the routes before the Germans announce their attack. If they select the same route, the Germans suffer a devastating air attack and their units are dispersed and unable to take the offensive, losing the game.

Incredibly, both decided to choose the Orange route, which they communicated to me this same afternoon. Must reckon that I had a big laugh and the poor German players were in total shock for this unexpected (and unknown to them) option in the Allied hands.

All this was settled communicating with the two groups of players through Whatsapp!

This is one of the advantages of playing campaigns and using independent umpires: incresed for of war and uncertainty; and of course more fun (specially the umpire). More surprises in store for both sides... and only I know.. Wa-ha-ha-ha!!