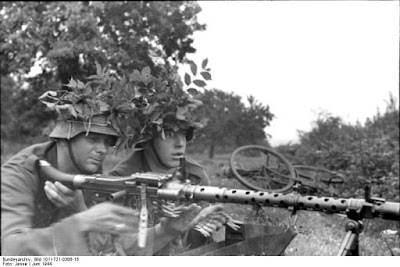 The third game of the Hickory Campaign concluded with a decisive German victory, causing a bloody havoc on the US units that had to pull out into Le Neufbourg, the objective of the offensive. Frankly, the position of the US players is in serious risk as the game today eliminated some critical scarce assets like ATGs and men.

The game was played in the Orange 2 map of the campaign booklet and corresponded to a Scenario 6 "Attack-Defend" in terms of the Chain of Command terminology. The German was of course the attacker and the victory conditions called for them either to wipe the resisitance in the table or force a withdrawing due to Force Moral erosion. 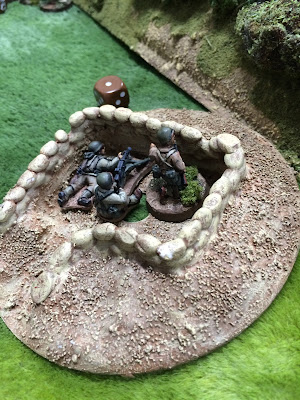 Following the patrol phase, the jump-off positions lines were established as follows inclined to the Southwest of the US and Northeast for the Germans. US trenches are marked in redbrown colour. 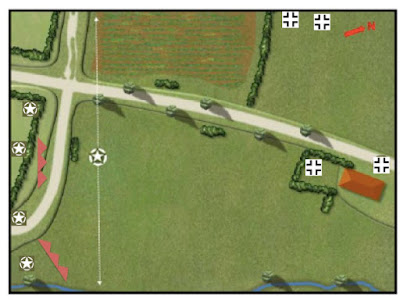 As in the previous game, the Germans went for a quick deployment of their forces organised around two "kampfgruppes", along the hedgerow in the upper part of the map and the house next to the road respectively. Each group was supported by an infantry gun. 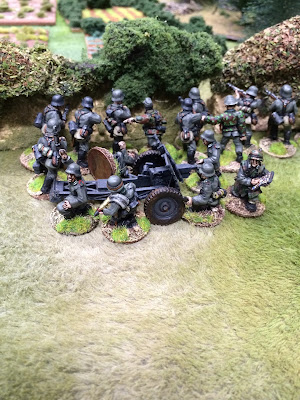 The German strategy was to try to lure the US to deploy in the table and then to destroy piecemeal one unit at a time thanks to its higher firepower (6 LMGs per platoon). With this in mind, the German commander sent a squad forward to threat the US jumpoff points close to the crossroads. 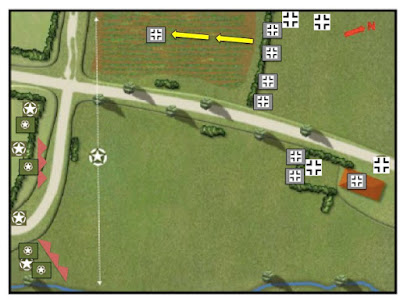 The Americans had few options but to try waiting patiently for the Germans to close in and get them at short distance in the open field. But one of the US players got too nervous and bite the bait, deploying perhaps slightly early than anticpated making most of the remaining troops on the table emerged in support. 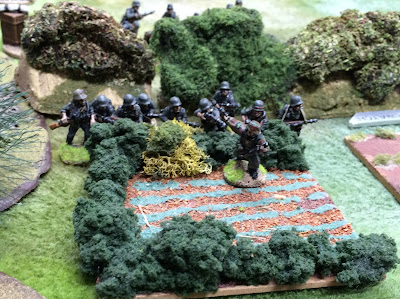 What followed was heavy and intense fire exchange between both sides, but the higher firepower of the Germans finally shifted the odds in their favour. Soon the first squads broke leaving the table, true not without causing some casualties to the attackers.

A Panther was brought in support and the last US ATG deployed to counter the threat. Both units engaged in a exchange of fire in which the tank's crew almost bailed out in panic. 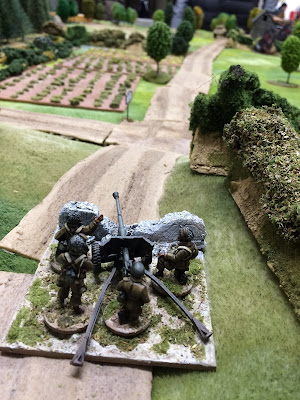 The German infantry LMGs restored the balance and soon the ATG gun crewmembers were dead of leaving the table in panic too. These casualties and loses brought the US platoon Force Moral to zero and the few remnants withdraw. 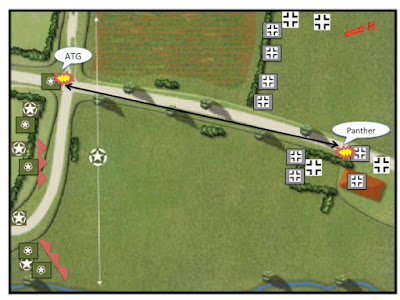 The other US platoon decided to stay on the table for the time being, The FOO placed an accurate mortar salvo on the German gruppe at the house, blinding as a result for a few phases the German observer's LOS. But the firepower of the remaining squads prevailed and with their own Force Moral falling to just 2, the US player gave up and pulled out. 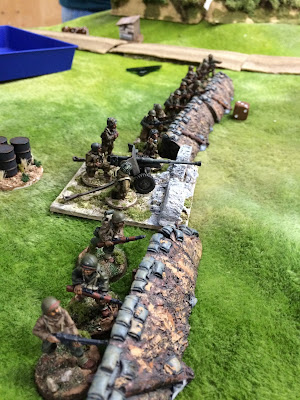 As commented, the US side is in a difficult position. The Germans are now in the outskirts of Le Neufbourg and must not only avoid it falling but had to hold for several more gains. The Germans had one fresh company to throw into the fray and another two companies in relatively good shape. All US units and reinforcements distributed in the other approaching routes will be likely called into the defence of the city, which should give the Americans some good punch to resist...  I see a mini-Bastogne coming in the next games...

(Note: due to the Christmas festivities and a club event next week, the following game is unlikely to take place before New Year)