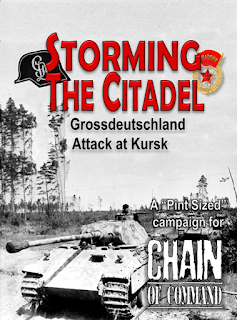 TooFatLardies just announced a new campaign book for Chain of Command in their "pint-sized" campaign series (Pint = priced as a pint of beer in Richard Clarke's local pub). Storming the Citadel is the first  time that TFL moves East, to the time of Kursk/Citadelle, following the trails of the GrossDeutshcland Division.

As usual, the campaign is self-contained with all the army lists, scenarios and special rules, supported by a nice display of maps and historical information. Another one not to miss!