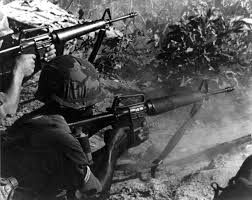 As announced early this month, I recruited some of my gaming pals to test the Vietnam War variant for Chain of Command developed by Jason Sendjirdjian in his blog Wargaming DMZ  and finally today we could put some minis on a table to see how it works. If you are interested in the period, I stronlgly recommend your browse that blog, lots of wargaming good food for thought and many interesting resources. Note this is NOT an official or TooFatLardies-endorsed supplement.

First things first, if you don't know Chain of Command this is a set of rules published by TooFatLardies to play skirmish battles in the Second World War, typically at platoon level but can accomodate up to a company-size game using the Big CoC supplement.

The rules are mainly focused on infantry units complemented with other weapon supports and  1 or 2 tanks. If you like to dwell in the detail of the rules, I published here a set of posts titled "The Chain of Command Diaries  # 1-6" commenting the most innovative aspects at the time of the playtesting.

Whats new in Chain of Command DMZ?
The Vietnam variant basically leaves untouched the core rule mechanics and adds a few bits and pieces needed to simulate the tactics of the conflcit. These changes refer to the terrain, weapons, unit organisations and national characteristics.

Terrain: new types of terrain are introduced including two levels of jungle, swamps, savanna (tall grass), bamboo, plantations and of course the ever present rice pads. Terrain has a lot of impact both in the ability of the units to move and to spot; a very smart mechanism forces players to roll for LOS  while in thick vegetation terrain, making it terribly difficut to assess if one is enough near or not to fire an enemy unit while not being in risk  (like happened to one of my patrols today) of suffering a deadly ambush. This simulates the difficulties to correctly spot the enemy in such environment.

Weapons:  the whole arsenal covered including M-16s, Bloppers, LAWs, RPGs, recoilles rifles, etc. There's also a nice list of vehicles including of course the popular and ever present M 113 (which incidentally  reminds me that I have three models in my lead and plastic pile needing a brusk work...)

Units: one of the most important pillars of the variants. Not only because the OOBs covering many types of units (Free World and Communist) but also because the national characteristics and options available in the army lists are what allows the simulation of the contemporary tactics.

As a matter of  example (and which I suffered today), one Communist player option called "local knowledge" allows the player to deploy any unit and additional 6" from the jump-off point or move the jump-off up to 18" from the initial position.

The cunning enemy this morning waited until my US forces were far enough form my jump-off and use a double activation to first move his own jump off, then deploy a unit on top of mine (capturing it) and fire in the same activation to a unit moving in a road in the open, causing signfincant damage.

What's missing?
Well, this was just the first test so I can't really make a very critical assessment yet (in fact I reviewed the supplement this afternoon instead of taking my Sunday siesta and found some mistakes we made while playing).

In any case, as a heavy player of Charlie Don't Surf in the past (the company-size Vietnam era rules of TooFatLaries) I missed the political side of the game (which was a differential aspect of the rules), a set of era-specific missions and finally a Medevac mechanism, forcing the FWF playr to change mission if evacuation needed.

Again let me stress that today was the very first time we played DMZ and have to admitt that I enjoyed A LOT the game this morning, the rules effectively simulating the hardships of a US unit in the Southeast jungles.

The game this morning
The table this morning had three types of terrain that we wanted to test. From the far end to the front of the picture: "secondary jungle" (LOS 4+D6, movement D6-2pip, har cover); "savanna" or tall grass field (LOS 6+D6; movement faster that tactical adds 1 shock point; light cover); and rice paddy. 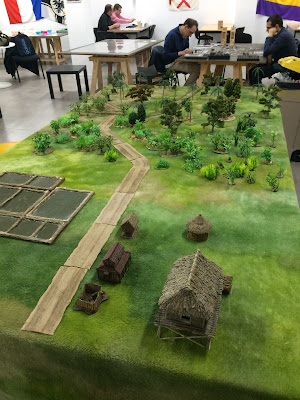 We chose to play a Scenario 1 "patrol" of the main rule book and after dicing for entry, both sides got entry points in the jungle and savanna areas, so most of the game was played in the far end of the table.

The patrol phase concluded with the 3 US jump-off markers located in the second half of the table in the middle and the NVA closer to its tactical edge. The 3 US squads deployed early in the game, but the attempt to move fast towards and capture the Communist jump-offs was seriously hampered by the difficuties to move in such thick jungle.

In the meantime, an NVA unit deployed on the table was able to extract itself from the jungle soon (thanks to the local knowledge option it could deployed at 12" from its jump-off), crossed the Savanna and outflanked the US forces, become a threat to both their jump-offs (captuing one without opposition) and to the rearguard of the FWF.

The US tried sending a patrol to threaten the NVA jumpoff, aiming to force a deployment of the enemy unit. But the local knowledge option allowed the enemy to deploy far enough to catch the poor US pair unsupported, being captured and then dragged to the enemy tunnel maze (MIAs).

The US forces at this stage were in a conundrum: not close enough to capture any NAV jump-oof and far enough to lose a second own jump-off. In a brilliant maneuver, the NVA player used a double activation to move one of its jump offs up to 18" and then to deploy another unit at 12" just on top of the third US jumpoff. 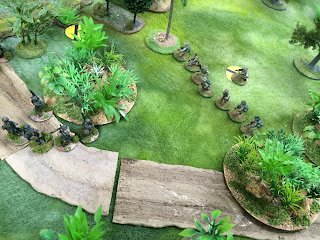 The lack of a CoC dice prevent the NAV to capture the jumpoff. In a final stage of the game, a US squad could get close enough to the NVA unit as to charge them in close combat. A pile of 33 dice pr side was rolled and the US won by a difference of 2, wiping out the enemy unit (including a leader and political commisar) but at a high cost (7 KIA, one leader killed and one wounded). The Force Moral dice roll put both sides at level of 1 and a draw was agreed.


A close affair, but hats off to the brilliant NVA player, who won and mantained the initiative from moment one, catching the US player off-guard in different moments of the game. The charge at the end of the game was epic but a suicidal and truly desperate move, achieving a draw more by luck than art in a game that was lost by all means.

In summary, an exciting game and an enticing CoC supplement that I strongly recommend to play to any CoC fan interested in the period. We are already planning some more games and discuss the possibility of creating some additional rules to cover those missing aspects described above.
Publicado por Anibal Invictus en 19:05