How (and Why) I Did Get Back to Squad Leader 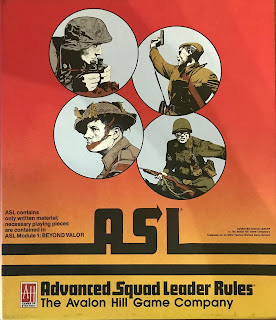 If 2019 marked my return to boardgaming, 2020 marked a rendez-vous with my old friend Advanced Squad Leader (ASL). The image above is a photo of my venerable copy of the binder book acquired in the late 80s to the Avalon Hill Game Company incarnation pre-Hasbro.

I have had a sort of a love-hate relationship with this game over the yeas. Love, because I've always been attracted by tactical games in a Second World War context. Actually my very first wargame was Panzerblitz in 1980, and naturally I moved to the original Squad Leader (SL) system as soon as it was released.

Hate because, after gradually learning the different original SL modules, I went into shock with the ASL binder book: how on earth I was supposed to play a game whose rules book was closer to lawyer's manual than a typical wargame?

Over time I decided to give up on the system; not much later, I discovered the world of miniature wargaming, first fantasy related games (Warhammer Fantasy), followed by Ancients, Napoleonics and finally Second World War.   Boardgames were abandoned and my hobby time was since then dedicated to researching, painting and collecting miniatures.

So how and why the return? The how was simple: a dedicated group or boardgamers at the club invited me to join a Holland ´44 game last year and I got immediately hooked to it. The why even simpler: being Market Garden one of my favourite periods, I realized that boardgames were a superior and more efficient means to explore the campaign.

The COVID arrival and the long-enforced lockdown (from March to June) made the rest: with the club shutting down sine die and the impossibility of playing miniature games, my boardgame group planned a busy calendar of weekly VASSAL games, extending from Friday evenings to Sunday afternoons.

Longing for playing some tactical games, one of the members introduced us to ASL around May and almost eight months later I have become a proficient player of the game. True, I have invested a lot of time in playing the game (the only realistic way to learn the rules). But believe me if I tell you,  the monster is less fearsome that it may look at first glance, juts by planning a little bit your steps into the game and setting some realistic targets.

What follows are some of my personal lessons learnt, shared now with all of you potentially interested in the game.

ASL is one of the most popular wargames in the planet. Try finding someone in your gaming circle that already plays the game and train with him. For many of ASLers this game is like a religion and attracting new souls to the congregation is like a spiritual mission, they will never reject your call for help.

If you are unlucky enough to find a ASLers near you, then find online assistance in one of the many hundreds of ASL forums on Internet. There you'll find all kinds of support and advice for newbies.

Another silly advice. Browse YouTube and find introductory videos to the system. I cannot recommend any in English unfortunately because I was lucky enough to have a long series of introductory materials by one of Spain's most active and reputed wargame youtubers (Agustí Barrio). But I'm sure there are similar characters in every single language and specially in English.

3. Go for the ASL Starter kit

OK, this is controversial. ASL Gronards will say this is piece of **** but I don't care a fig. The ASLSK is the most comprehensive, structured and pedagogical ASL manual to learn the tricks of the trade. It is in its 4th edition (released January 2020) and the best thing of all is that you don't even need to buy because the nice people at MMP offers as a free download from its webpage.

It is true that ASLSK makes some shortcuts with the rules and does not cover the system in all its glory. But if you aim to get introduced into the main core syetem mechanisms, there's no better tool at hand.

Do not try to go for all in one shot, but set modest achievable targets and progress gradually through the system. My recommendation: first play only with infantry and master the Sequence of Play basics, adding some of the support weapons (L/M/HMGs, Flamethrowers, demolition charges, mortars...); then move to artillery and after to AFVs/Vehicles; introduce snipers in between.

I strongly recommend using the original collection of SL scenarios adapted to the ASL system ("Scenarios from ASL classics"). Again, these can be found a downloaded for free at the MMP site. Scenarios A to C (urban combat in a Stalingrad environment) are a great way to get into the system

As you feel more comfortable with the frame of the ASL system, you can then move up in the ladder: play more advanced scenarios introducing other complementary rules (from gliders or paratroopers jumps to weather conditions, etc) and go through the book to learn this new add-ons.

Note also that playing a North African desert environment or the Pacific theater requires a significant additional learning effort and investment (especially the latter theater). Unless you are really mad for those tehaters, leave them aside  until you command the main rules.

I have discovered that ASL has expanded with no limits since my first contact with the system in the early 90s. Then you only had the rules book with the binders and the expansion boxes (Beyond Valor, Yanks...) published by Avalon Hill (and later taken over by MMP). Now you have literally an infinite number of publishers of scenarios, campaigns, magazines, games... it's really insane mostly because of the sheer number of existing games (you'll need two or three lives to play all those materials) but also because of the astonishing prices charged for them.

From the very begining I decided to stay cool and don't rush, especially in a situation where I had none or very limited opportunities to play a face to face game on a table because of the pandemics. In this case I have to admit that VASL (=Virtual Advanced Squad Leader, just in case you did not know the acronym meaning) has beeen of paramount importance.

This cyberboard application has almost all the materials (boards, chits, game pieces) of every important game released in the ASL universe; and the controls interface embeded in the system to manage games  is outstanding. Many of the more obscure expansions or campaign designed by independent publishers, you can bet they have the VASL module also available.

My opinion is that the two real mandatory investments that you need to do are the ASL pocket edition book by MMP and the collection of tables published by Le Franc Tireur (an independent French publisher especialized in ASL materials). 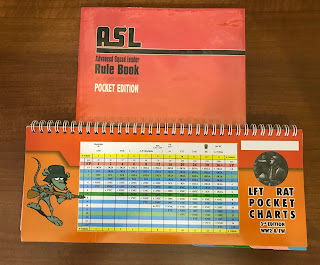 These together with VASL is enough to play ASL comfortably, with a limited financial investment (around €100 total). Furthermore, if you finally conclude this is not a game for you, there is a fairly liquid international market for second hand ASL materials; and these two particular pieces are in high demanded, so your losses are likely to be quite limited.

Some questions and likely some dumb answers

Arriving to this point you might have some questions, so feel free to post in the comments section of this blog. Nonetheless, there at least a three that come to my mind:

Is it really worth the effort?

Yes in my case, but a clear distinctive factor has been the enthusiasm and engagement of my gaming group.  2020 has been (...still is...) a very odd year; especially in the very gloomy months of March to June, having the ability to finish my (remote) working day and connect to play a game on an almost daily basis has been very helpful for my sanity.

The need to study and learn new ASL materials also helped me to get focused on something different to the pandemics and work. Having said this, I'm still learning and testing new features after 7 or 8 months; unless you have a curious mindset, these rules are almost infinite, I bet you never know all.

Have you tested alternatives?

If your are looking for a tactical-oriented game in a Second World War battlefield, ASL is one of a bunch of game systems. A few coming to my mind: the Lock 'n Load Tactical series, the Combat Commander system, the more recent Last Hundred Yards by GMT.

I first tried Lock ´n Load which is a sort of simpler version of ASL in many aspects and therefore more friendly to learn. However I found that some shortcuts in the mechanics made it prone to some gaming tricks and decided not to continue with this  system. The rest I do not know, and I cannot honestly offer my opinion (you can consult the BBG site to get your own views).

What are your views about ASL?

ASL is arguably the most comprehensive simulation of a tactical battlefield in the Second World War that I have ever played. The rules cover any single situation  in that environment that you can imagine, every single army, every single weapon and every single model of every vehicle of all nationalities. The level of detail is astonishing and the research effort behind the game (at least at the technical level) is impressive to say the least.

I won't say it is the easiest game to learn and play. But again, it wil depend on the level of challenge that you may want to impose yourself. ASLSK for example, with all the shortcuts commented, is no more difficult to learn than any other average wargame and offers infinite playing possibilities.

In this sense I have enjoyed learning and playing the game, and it's true that my gaming group enthusiasm has helped a lot. Nonetheless there are three aspects of the game that sometimes bother me:

But then will you abandon playing Chain of Comand?

Straight NO. I consider Chain of Command (CoC) one of the best tactical/skirmish game designs ever palyed, but it is a complete different animal to ASL. The degree of discretion that you have playing CoC is impossible in ASL and the command-oriented design of the game is one the most attractive features.

With CoC I have achieved what I haven't been able with ASL: having the rules in the background of my mind while only focusing on the tactical aspects of the game...I may (why not)  reach that same state of bliss in the future with ASL ... 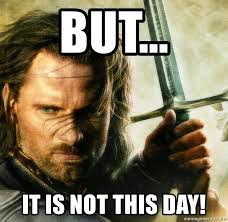 And frankly speaking, card counters on cardboard will never look as magnificent as my toy soldiers on a high quality wargame table.

Your comments are welcome.

Email ThisBlogThis!Share to TwitterShare to FacebookShare to Pinterest
Etiquetas: Boardgaming