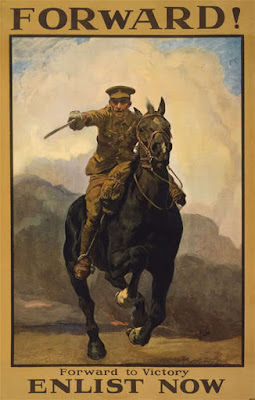 My gaming mates and me usually met just before year-end to play a long game and them go out for dinner. This year the turnout was surprisingly large and I had to arrange not one, but two games in order to accomodate everybody (a total of 14 players). Luckily, our Stalingrad campaign organiser Alfredo volunteered to undertake and umpire this second game, giving me enough time to plan a WWI battle with Mud & Blood.

One of our club members have been recently painting some nice British cavalry minis and was eagerly looking to put them on the table.

While looking for materials, I remembered that Sidney Roundwood (see his most excellent blog here) had published in one of the bi-annual TooFatLardies Specials a couple of scenarios involving cavalry actions, with the added attraction that some light armour was also involved.

The game takes place at the end of March 1917, with the Germans retreating into the Siegfried Stellung and blowing apart any piece of usable infrastructure in Belgium to deny the use to the Allies. A British cavalry detachment supported by two light armoured vehicles and a Royal Horse Artillery battery is ordered to take the small village of Villers Fauçon, sitting in an important cross-roads.  The village is defended by two (understrength) Germans platooons supported by three HMGs. The victory conditions were very simple: winner is the side controlling the village after 20 turns (or time for snifter cards)

The terrain is wide open, with the only important feature being the village itself; some light tree copses and the shell craters from a previous British artillery bombardment are also present. 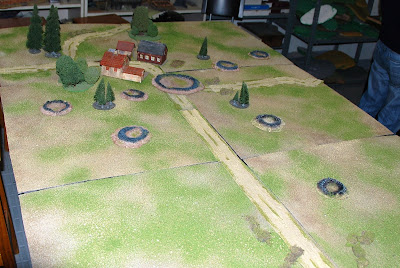 The key to success for the British player is a swift move to approach the village, using the horses at full speed and under the cover of a snow blizzard that reduces the chance of being spotted (and fired). Once there, to dismount and to conquer each house in close combat.

As stated in the scenario instruction, the British cavalry sections deployed at both sides of the road crossing the table from west to east, with the armoured vehicle section and the RHA battery moving along the road itself. The terrain is muddy and the vehicles were subject to bogging down if moving off-road.


The game had two distintictive phases, the first one illustrated in the following chart.


The left cavalry section advanced until being spotted by a German HMG section under cover in a near shell crater. After suffering some casualties, the British commander ordered the first squad to charge and despite an overall  superiority in number of men, it was rejected with a difference of two KIAs. 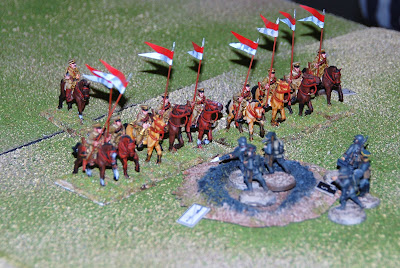 The second cavalry squad then charged, being rejected too!! ... however the German unit lost the bottle due to accumulated shocks and routed towards the viallge. Although the first German position was overrun,  the left side of the British line had suffered casualties and  a large number of shocks, restricting its operational capabilities temporarely. Any explotation of the gap in the German line was impossible.

In the center, the two armoured vehicles moved cautiously along the road, making very little progress forward. Although the snow blizzard should have been advantageous to the British, it also create problems to the crews to spot the German blinds, rendering ineffective the use of their MGs.

Instead of  making a bold dash forward, once the vehicles reached slightly more than half-way  the distance between the table edge and the village, the British commander decided to stop and use them as a fire base in support of the flanking cavalry units.

In the right flank, the British cavalry section made some progress forward towards its objective (the road running south-to north through the village). But unfortunately and despite the bad weather conditions, it was spotted by an eye-gifted German NCO early in the game. This British unit concentrated all the firepower of the German HMGs and accumulated such a large number of casualties and shocks, that by turn 8 of the game it was off-action to all purposes.

The second phase of the game started with the entry of both the RHA artillery and a British infantry section reinforcement. the latter being a gift of the umpire as a way of providing some momentum to the faltering (and dispirited) British forces


The artillery battery unlimbered and deployed in a nearby shell crater, in the British right flank, and put some fire on the central German position. 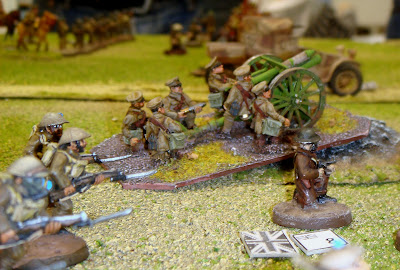 The German reaction, as anybody would have expected, was to bring all the rifle and  HMG fire into the artillery piece, considering also the lack of ther threats on their units: in a couple of turns, the RHA battery crew was reduced to half strength, and with a significant number of shocks taken, it proceeded to limber again  and to leave the table at gallop. 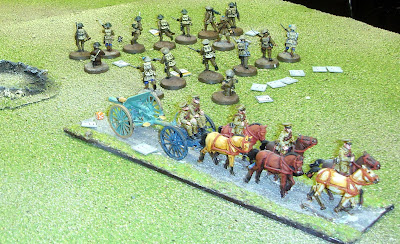 The right flank was at that time collapsed and had no additional role in the rest of the game.

In the meantime, in the left flank, the Big Men of the cavalry unit worked hard reordering and recovering the remnants of the two squads, who remounted,  moved forward and successfully charged  the next closest German unit in the outskirts of the village. 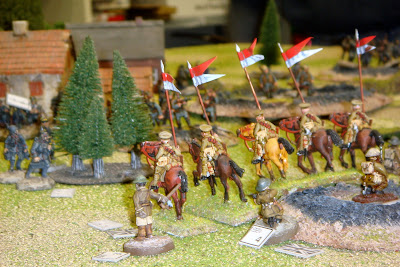 Simultaneously, the infantry reinforcement was also flanking the village on the left and prepared itself to close-assault the first line of houses. 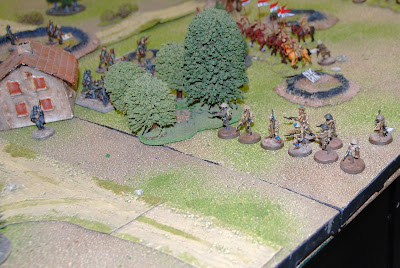 However, the Germans reacted and succcessfully redeployed one of the HMGs (despite taking them 2 full turns!) to face this new threat. 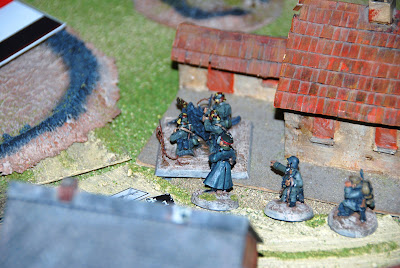 It was then that the umpire (me) decided to conclude the game, proclaiming a clear German victory: all German units (except one HMG captured by the cavalry initially) were in good shape, with hardly any casualties and few shocks, under cover in buildings or shell craters and exceeding in numbers to the British attackers.

The British players in general found the scenario unbalanced; I would qualify it as"challenging" rather than "unbalanced". My comments:
In my view, the scenario clearly merits a replay, probably with fewer player per side and once they have "refreshened" some basic tactitical principles.