Training the New Recruit in Through the Mud & the Blood 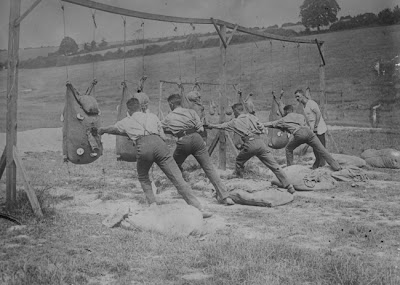 A lovely Sunday for me today, played my first game in three months, got a new recruit for our legion of local TooFatLardies faithful and had a decent lunch at the Real Madrid's stadium cafe to celebrate Father's Day (actually its is tomorrow, but I prefered to avoid the usually overcroweded restaurants on March 19th).

I made my good action of the day, training Alfredo, a new recruit in the 'arts' of the Through the Mud & the Blood, the TooFatLardies WWI platoon-sized skirmish rules. Well new recruit may be an exageration after all, as Alfredo was one of the founders of our club back in in the early 80s... but only recently he has returned to the hobby.

Anyway, Alfredo being only slighltly familiar with the rules, I decided to go for the first training scenario of the companion scenarios book Stouts Heart, depicting a British 1917 platoon with its four sections (rifles, Lewis gun, bombers and rifle-bombers squads) that has to take a well defended cross-road strongpoint.

I remember enjoying a lot these training scenarios three years ago, when I first came into contact with TMB (and with the TFLs rules systems). Despite its simplicity, we have a very lively game concluded in a couple of hours and with the British reducing the last German redoubt with a shower of hand grenades at short distance.


Alfredo, a very entrepreneurial guy, brought a couple of surprises this morning. The first was a very interesting wargaming felt clothe terrain simulating grass, that he plans to launch on a full commercial scale soon. I was really  impressed with it. It is made of a light and flexible but very sturdy fabric; the felt is resistant to all imagineable bad treatment and strongly fixed to the base fabric. 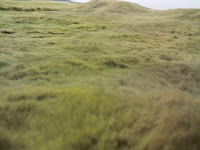 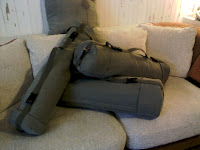 The mat size is 8 long x 4 wide feet and can be stored conveniently in specially made clothe bags (see photo above).

The second surprise is a first test (in foam) of a bunkers range that he plans to produce in resin. In this case, it is a WWI German concrete bunker, but his initial plans are to develop a wide range covering also the typical fortifications found in the Spanish Civil War. 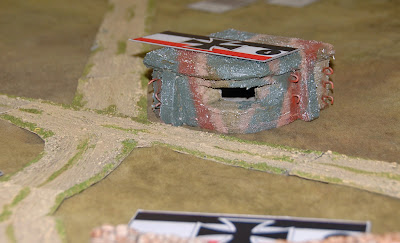 Going back to the game, the British platoon entered through the western side of the table in blinds and taking advantage of a couple of low hills to aproach under cover the German defensive line... 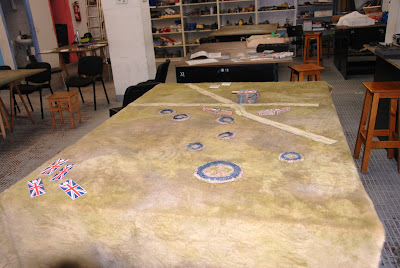 sent his bombers, rifle and Lewis-gun sections in a flanking move on the left...

while the rifle bombers  were left  in the rearunder the cover of a shell crater, but with a line of sight to the German strongpoint.

The German forces comprised two rifle sections and a HMG, commanded by 4 big men. The HMG was placed (obviously!) in the bunker while the two sections manned the barricades on both sides of the bunker. 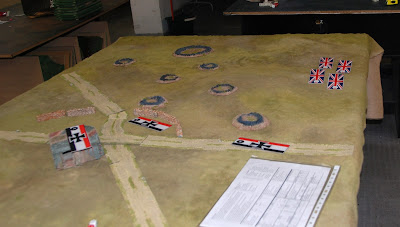 One of the German blinds moved to the north of the road to provoke and automatic spotting of one British blinds (the bombers section)...


...   who were subsequently fired in the open, but unfortunately with very limited effect. 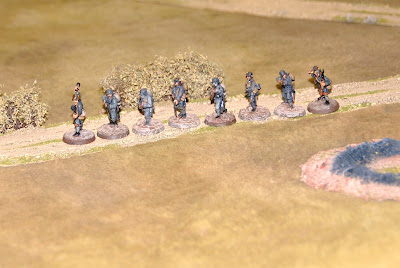 In the following moves, the British player pulled back the bombers out of the line of sight of the Germans and sent forward his rifle section... 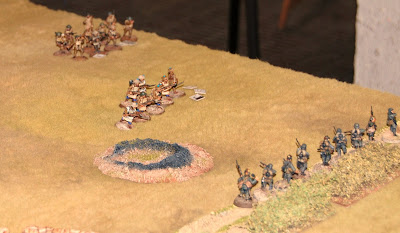 while the lewis gun section took position at the top of a hill overlooking the main German lines.


In the exchange of fire between the German and British rifles, the former had the upper hand, forcing a hasty retreat of the British with high casualties. These were avenged by the Lewis gun section, achieving 4 casualties in the first fire (including the corporal section leader) and several shocks, forcing the squad to take shelter in the barricade.

At this moment the German HMG  acted for the first time... 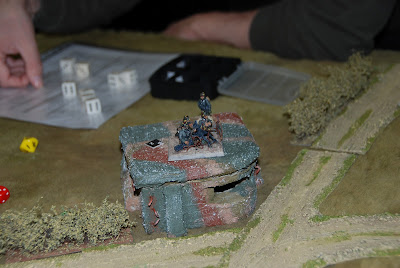 ... creating havoc among the Lewis gun section, that was reduced from nine to three men over the next turns. In the meantime, the rifle-bombers concentrated their fire on the second German rifle section, with such  good shots that broke the moral of the unit, going into hiding behind the bunker.

The HMG now was the only remaining German unit on the table vs two of the British. However the rifle bombers had exhausted the allocation of grenades by then and were very far away to have any impact in the game now. Nonetheless, a bold British commander decided toi sent the bombers section running (aided with the help of the storm card) to charge the bunker on the side, but failed to get close enough.  With the British now out of sight, the German commander decided to place the weapon on the roof of the bunker, aiming to catch the bombers section in the open.

Once in place, the Time for Snifter card came out and the British and the Germans facing each other just 8 inches away. It was clear that the game was to be resolved in the following turn, and to be won by the first unit activated, who was...

... the British bombers. The British did not even bothered to attack in close combat, but poured their full allocation of hand grenades on to the Germans (18 dice!!!), resulting in in 15 possible hits, causing three dead and half a dozen shocks. End of the game and the British controlling the cross-road.

Aftermath (1)
Game lost but by a very narrow margin. Alfredo did make a very good tactical use of the British sections considering carfully their different characteristics (now we have a British infantry commander ready to take a commision!). The last move with the bombers was very bold and risky, but luck was on his side.

After the game I went to have lunch at the Real Madrid cafe with the familly. The cafe have some nice dishes, although overpriced as you can imagine. But at least my two childer and my in-laws enjoyed having a luch overlooking the field (I'm not a football fan at all but it was fun) 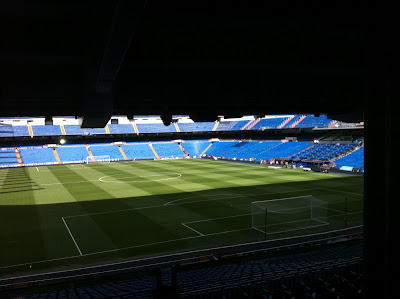 Aftermath (2)
ome photos sent by Alfredo this afternoon. The wargaming mats, not only the one used in the game this morning, also from the "elephant grass" model to play Vietnam or other South-East Asian conflicts (Burma, etc). 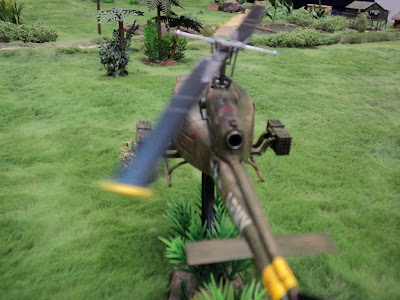 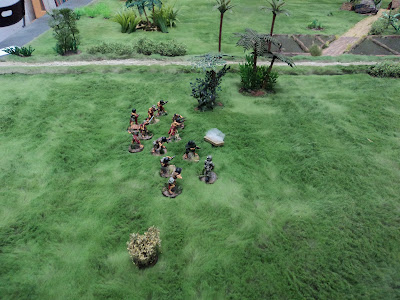 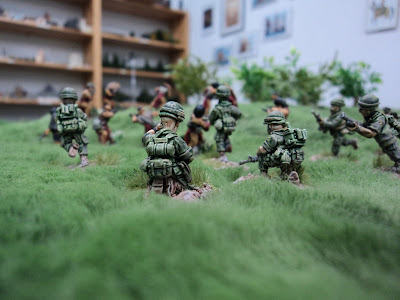 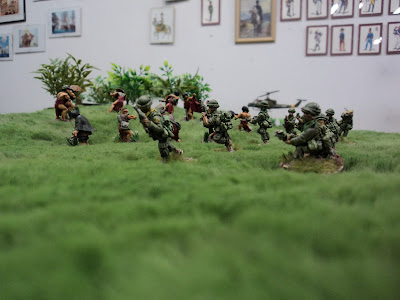