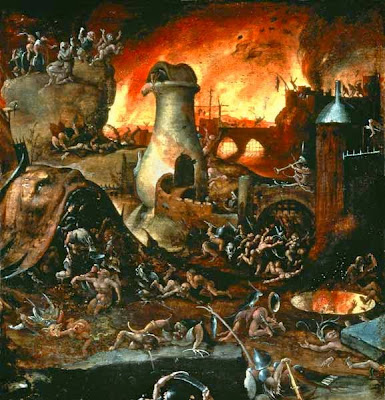 ...and hell is painting the modern British Army multi-terrain purpose (MTP) cammo uniform. Or at least this what I thought when I discovered the dramatic change in the British battledress uniforms.

At the time of planning collecting some British forces for Fighting Season (the incoming TooFatLardies modern warfare rules), most of the graphics materials I found depicted the typical British soldier en in the simple two-colour cammo uniform (sand and dark brown) so I thought that painting was "piece of cake". However, just after I bought the first batch of minis early this week from Empress and The Assault Group (coinciding with my birthday) I noticed that the uniform did not entirely match what I found in my photo search.

So I returned to "googling" more in depth and to my dismay I discovered that in 2011 a full new battledress and equipment had been introduced, currently supplied to almost all units of the British Army. Why the dismay? Just see the photo below (MTP on the right) 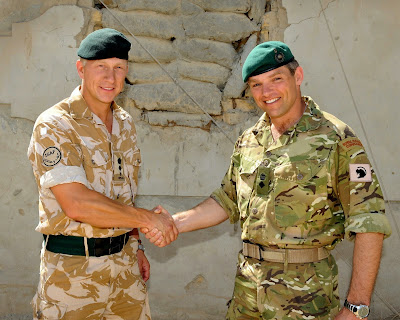 The cammo pattern is substantially more difficult to paint. Look now at the following photo... ahem! 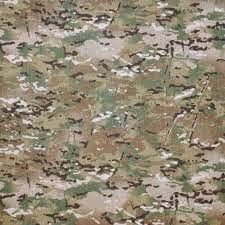 After the first moment of panic, I decided to grab the bull by the horns (as the expression says in Spain) and start testing with different colour palettes and combinations. I also found  a couple of websites with step-by-step guides to the new cammo, that you can reach here and here.

These two works are great, but I found the colours too bright for my taste. Furthermore, when looking at the photos in Afghanistan, I also noticed a substantial difference between the colour of the battledress and the webbing/equipment, the former much faded into a beige/medium grey tones.

The reasons probably are that the battledress is probably washed much more often than the rest of the personal equipment (likely brushed most of the time) and/or the use of different materials (cotton, wool in the uniform and polymers and other synthetics materials for the rest).

Compare this photo now with the one posted above; notice the difference between an used and a brand new uniforms. 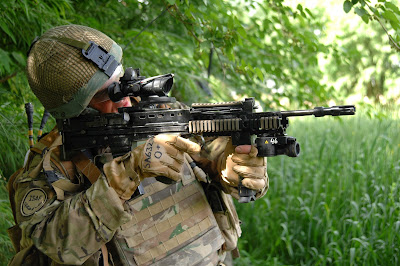 I also found quite an interesting source of information in the official British Army website: a 44-pages pdf illustrated catalogue of the clothing supplied to a British soldier.

With all this information it was time now "work on the field" and star testing. The final colour palette chosen is the following (all Vallejo references):

Before painting the webbing and the equipment, I washed the uniform with a very diluted chocolate brown to provide more depth to the mini.

And this the final result 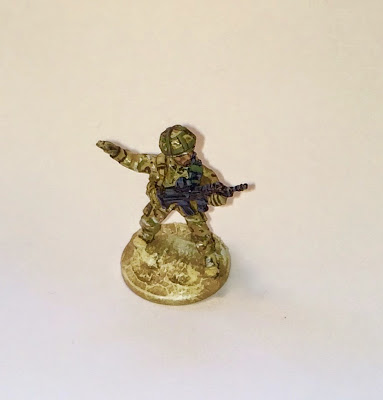 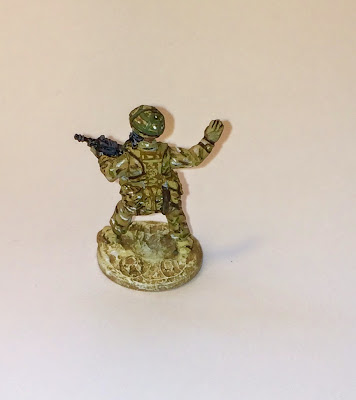 I coated the model in light grey but I'm planning to do a new test with black primer.
I  would also like the uniform to look more faded that in this first test, which I will attempt using more diluted paint with the dark colours (green and dark brown) as I've been doing with my Second World War Germans.

This post is very unusual in this bliog, as I don't like to write about my painting progress (doesn't add any value to the reader). However, considering the very special topic of the MTP cammo, I hope this has been useful for those of you planning to start collecting a modern British Army unit.