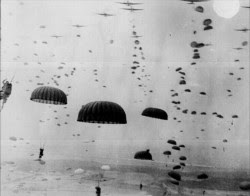 Coinciding with the week of the 71st anniversary of Market Garden and just a few weeks to visiting the battlefield site in November, we decided to start the autumn-winter 2015 season with an Arnhem-based game for Chain of Command. Sometime ago, Wargames, Soldiers and Strategy magazine published a special issue (number 74) focused specifically on the operation; TooFtaLardies boss Richard Clarke wrote a short campaign called “5th Platoon” that we started today.

As described in the magazine:

“It follows the actions of 5 Platoon, who were the spearhead for 3 Para’s advance on Arnhem down the Utrechtseweg, one of the three key routes that 1st Airborne were to take into the city. The period of time covered by these actions is relatively short, lasting just a couple of hours at most, and geographically they covered about a mile of that key stretch of road.”

The British win by emerging victorious from the four games, which allow them to control a key crossroad at the Koude Herber Inn. The British Paras must progress at all costs towards the objective their main advantage being an elite force; the Germans had all type of second rate troops (clerks, staff officers, training personnel, etc) to be thrown in the path of the British. 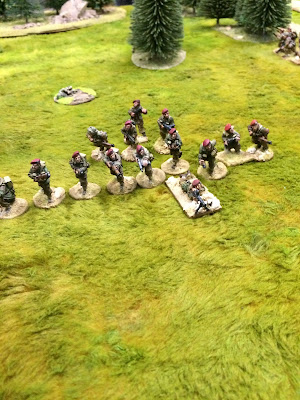 Both sides suffer from limited support options and reinforcements, and the feared armoured panzers will only come after game three and just 1 vehicle will be allowed.

This morning we played the first game but due to time constraints we could not conclude it and will resume next week with the Germans activating. The map of this first scenario and a photo of our gaming table is shown below 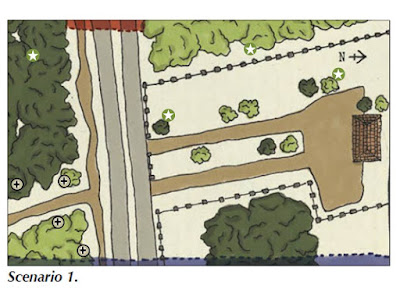 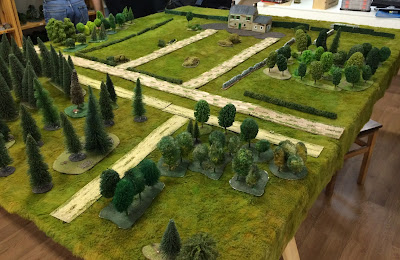 The British entered north on the road (red), the Germans through the southern edge (blue).

After the patrol phase, it seemed clear that Germans planned a defensive game, concentrating their jump-off points in the wooded area in the left of the map. The British decided to spread out along their tactical edge, covering a wider area.

The British took an aggressive stance since the first activation, deploying a large number of units in the woods to the left of the map and sending a squad to take the farm on the right. A light mortar and a sniper were also brought into game in support. 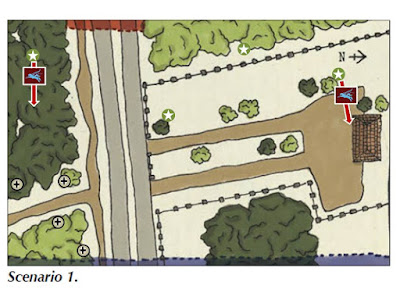 With the British intentions clear now, the German players started a build-up in the southern area of the woods, putting in play three squads. In subsequent turns the artillery FOO and an additional squad in a Hanomag were deployed. 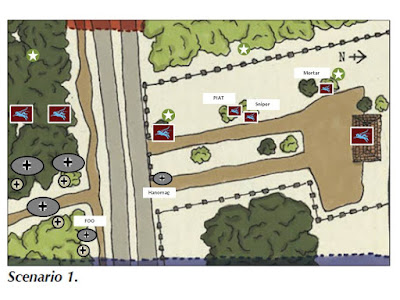 The artillery landed accurately on the house and the Hanomag was sent to harass a unit defending the flank of the British line at the other side of the road. After this initial rush of action, the game decayed somewhat. The British units in the right stopped out of the fire range of the Germans and deployed in overwatch; this gave the Germans the time to reinforce their own line and the positions remained static for the remaining of the game: a thin red line confronted by a field-gray wall... 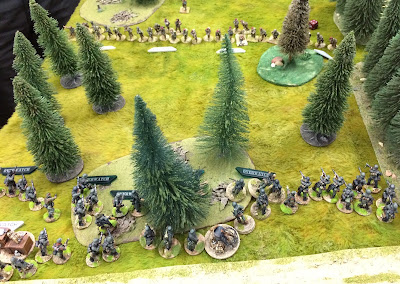 In the meantime the  Hanomag suffered the fire of the sniper but also the PIAT team, being finally put KO and the squad forced to disembark and to take cover behind the vehicle. A second Hanomag entered through the road and moved in support of the beleaguered German squad.... and that’s it! 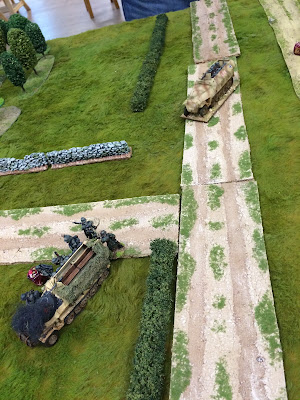 We had no more time and decided to stop the game at that point after a final British activation. It will be resumed next Sunday. The situation is more or less a draw at this stage. With most of the units committed, the British will be forced to break the deadlock in order to win the scenario. 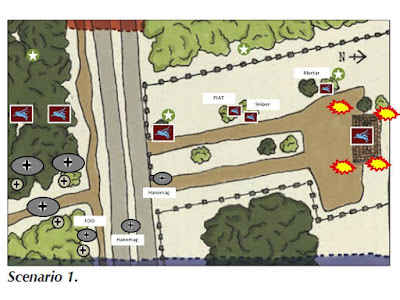