Snipers vs Half-Tracks in Chain of Command 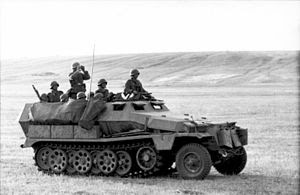 An interesting situation emerged in the game yesterday that I believe is worth commenting and having your views too.
You may remember that a German half-track was knocked just just before we stopped playing. This action brought a major (tense?) discussion among the players, as it was a combination of the combat effect of a sniper and a PIAT.
First some background before dealing with the reasons for this discussion.
Morale is a key component of Chain of Command, by means of a simple but effective mechanism. The fighting efficiency of the combat units decreases not only as a result of casualties but also by accumulation of “shocks”: when shocks are equal to the surviving men in the unit, it is pinned (forced to take cover and fire is halved); when shocks are more than double the men the unit is broken and routs (becomecombat ineffective).
The Chain of Command sniper rules give some interesting bonuses to this support option including doubling shocks when successfully hitting a target but not achieving a kill.
On the other hand, vehicles operate as individual, independent assets in Chain of Command and have some special morale rules: the morale level of a crewed vehicle is related to the level of the commander in charge: 3 level for a junior leader, 4 level in the case of a senior leader.

Vehicles accumulate shocks as a result of firing from other AFVs or AT weapons, according to some tables. A personnel carrier must stop when shocks reach the moral level of the vehicle and must be abandoned (the crew bails out) if shocks exceed the moral level.
Although small weapons fire is generally ineffective against vehicles, snipers are allowed to try firing to the exposed members of the crew; in the case of an APC, these will be the MG gunner(s).
Now we reached the nudge of the discussion. Combining what I have just written, as sniper shocks are doubled, you may quickly infer that with a couple of well aimed shots by a sniper, you can easily put KO a half-track.
Now this is not only a cheap way of getting rid of an expensive vehicle, but I also think it is intrinsically wrong: does it make sense that a full crew in a well protected and decently armoured (against small weapons fire) vehicle being frightened by the fire of a lonely shooter?
I can buy that an AFV morale can be affected by the fire of a weapon designed to destroy it specifically… but by a scoped rifle?
My other question (unresolved until further research is undertaken) is whether this complies with sniper doctrine and tactics in general. I must assume that infantry units were the priority (a single man can put in jeopardy a full platoon if well concealed) and not vehicles (except perhaps for the opportunistic shot to the tank’s commander peering out the turret hatch).
How do I read the rules? My view is that sniper fire of an exposed crew member of a vehicle (the MG gunner for instance in a half track) is legitimate; however only kills will be  accounted and not shocks (sniping on isolated leaders receives this same treatment).
If the crew member decides to risk getting exposed, he may end up in a grave, so better put the head down. On the other hand, if a MG gunner is killed, it will take two full activations of the junior leader to be replaced (understandably, the remaining squad members would be quite reluctant to take the now empty position)… that’s probably enough retribution.
On the other hand, this restriction will force the sniper to think where to use his skills in a more effective way: firing an infantry target and causing shocks or attempting a harder and opportunistic shot on a vehicle crew member?
Your views and contribution to the disucssion are welcome