Strong jumpstart in 2016: 3 days of the new year and we have played two new games of the Martlet Campaign for Chain of Command. We fought on the scenario 3 table, with a first German victory on New Year's day but only to be defeated afterwards on Sunday.

The Scenario 3 represented a key position of the German defense line and its loss represents a major setback. In addition, the German infantry has suffered significantly in the process; and despite causing casualties to the British, the latter has a full fresh platoon in reserve while the Germans have to play with the forces supplied at the beginning of the campaign.


Game number three was played in Table 3. At this stage of the game the mist that contributed to block the arrival of British units has lifted and there are no restrictions to deployment. The game is a scenario 6 of the main rules (Attack on an objective) and the British win if controlling the main crossroads to the left of the map and mop-up of enemy units the large farm compound located north  of the main road.

The British went for an aggressive stance from very early in the game, knowing that our abiolity to deploy units was severely hampered by the Allied artillery pre-barrage. Two sections of one of the platoons were quickly deployed aiming to take over the German jump-off point klocated in the orchards south of the main road 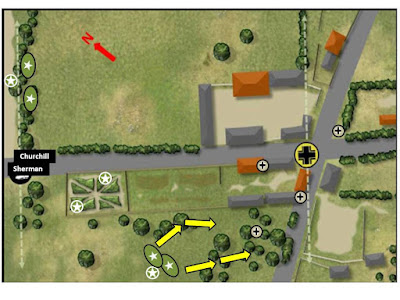 In addition, a Churchill AVRE escorted by a Sherman Firefly emerged in the road, looking to start pounding the farm compound, and two sections of the other British platoon provide covering fire from the tree line at the edge of the Allied tactical side.

With great difficulties due to the artillery barrage, I could put three weak LMG teams (my forces were already somewhat depleted by the previous game) to face the threat to my jumpoff point, while the other German player sent infantry inside the farm compound and brought a first Pz IV to fire on the British tanks. 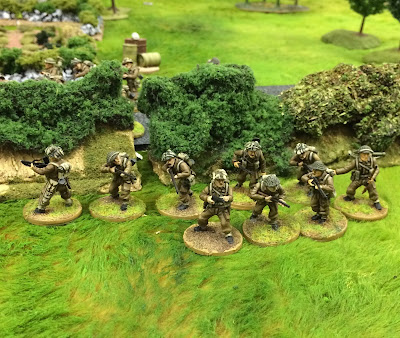 The infantry fire duel was net negative to the Germans (bloody dice!!) despite the powerful LMG fire. In the following activation the results were more balanced, knocking out the first British section; however the player launched another section to a close combat fight through my rear...

In the meantime, along the road the tank fire duel resulted in the destruction of the Pz IV. I brought into play a Pak 40 that in turn destroyed the Firefly... but the Churchill reacted and sent a grenade the size of a large dustbin over the AT piece... we are still looking for the remnants of the poor crew.

The Churchill turned now 90 degrees to cross the hedgerow and to start attacking the farm; but first had to stop for a full turn to reload... 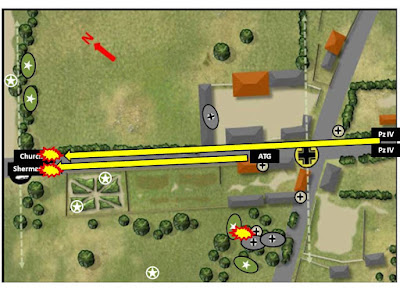 Unpromising outlook for the German... but sometimes miracles exist: despite unfavourable odds, the British infantry assault was rejected with high casualties. German infantry reinforcements emerged and pounded the beleaguered British, one section breaking and leaving the battlefield. In the road, a new Panzer IV emerged, firing the Churchill (still within LOS) on its flank with the expected result: hors combat! 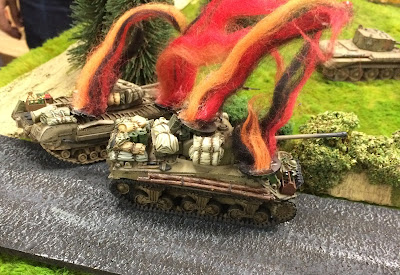 The British platoon Force Moral fell to zero and was forced to leave the battlefield. The other British platoon was still intact and decided to continue the attack. However, having lost the Churchill and with no other artillery support, the British player reassessed the situation and after a couple of additional turns, considered that its was going to be difficult (and bloody) to achieve the victory conditions... declared a retreat and the German achieved the first victory in the campaign.

However it was a pyrrhic victory, as the loss in men and tanks, and the lack of available replacements was denting the combat capacity of the Germans.

Game 4 was played in the same table. However the poor state of the German units was quickly felt. At the end of the patrol phase the British were clearly attempting enveloping the German forces through the south flank. Germans maintained similar defensive scheme to game 3. 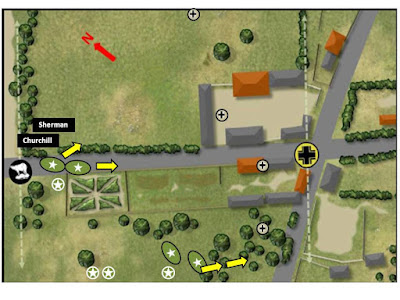 As in the previous game, the British aggressively attacked from the very first activation phase. Again two sections emerged of the most advanced jump-off and aimed to capture the German position in the orchard located south of the road.

The story repeated, but this time the results were less favourable to the Germans, who suffered the loss of a junior leader and a substantial amount of shock, pinning two of the three teams in the orchard.

The infantry assault this time was done with more favourable odds (as the Germans were pinned) and in the hand to hand fight the three teams were wiped out together with the remaining junior leader. The jump-off was lost and captured after a turn ended. 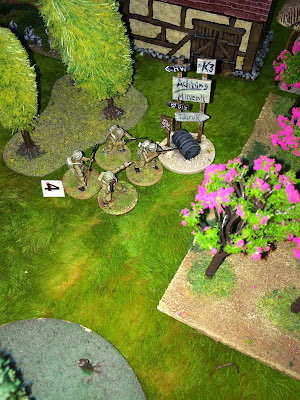 North of the road a Sherman and a Churchill emerged. The Sherman was destroyed by a Pak 40 but this in turn was disabled by the Churchill. A smoke screen covering the farm and the main road blocked the LOS of any German tank emerging at the other edge of the table. 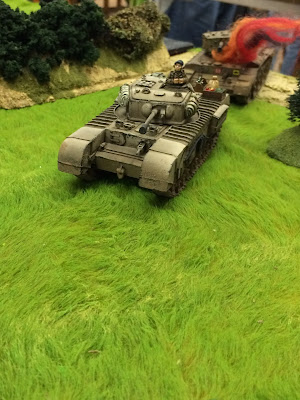 The only option was to deploy and move through difficult terrain to be effective at all; but before entering the table it had to overcome the artillery pre-barrage, which it failed to do. In the meantime, a recon car was sent at full speed and took control of the isolated German jump-off in the northern edge of the table, captured too when the turn ended. 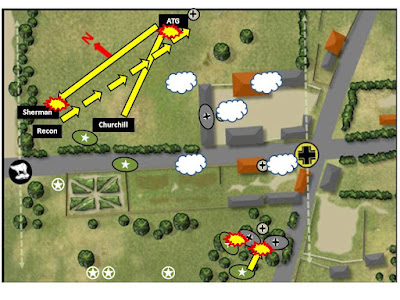 The combination of units, leaders and jump-off points lost broke the force moral of one of the German platoons, falling to 2; the other platoon also suffered and was close to breaking the 5 level. In this context, the Germans had no other choice but to leave the table.

Firstly, when I was wrting this report I just realised that how stuoid (yes, thta's the word) we were: we could have counterattacked (the initiative was German) and being supplied with 12 support points for each platoon instead of the seven allotted in defense!!  Instead, we just gavee unconciously away the initiative to the Allied...

Secondly, I had a question via my Twitter account on how we have adapted the Martlet supplement to play Big Chain of Command. Well, we simply double the number platoons and the support points, while we play on a table that is 2 feet larger and wider than the standard for platoon-only games.