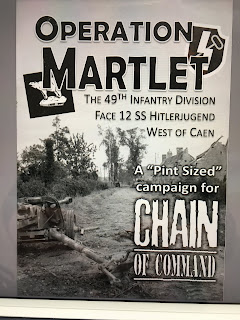 Over the past two weekends we started and re-started again playing the Martlet campaign:  no surprise, my gaming pals and I seem to be a little bit rusty in relation to the Chain of Command book and additionally forgot to read the special scenario rules, which basically invalidated the result of the first two games.
The first replayed game (Scenario 1-Probe into Fontenay) represents an attack of the German outposts located in the outskirts of the village of Fontenay. The British win if at least one team exits the table through the German baseline.


This was a quick (actually, very quick) game lasting two consecutive phases. The British players outgame me in the patrol phase, placing a jumpoff point in the main road at the bottom of the table (see illustration). 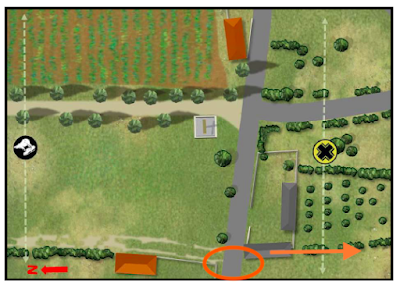 Considering that the British had the initiative (therefore, moved first) and the artillery support hampered the deployment of the German units, in a couple of phases a British section was off table.
So first game and first win to the Allied.

The second game (Scenario 2 – Pushing On) the British must pass through the village of Fontenay and towards the main German defensive line. The victory conditions are those of the Scenario 3 of the main rulebook, which basically means either wiping out/ demoralizing to level 3 the Germans; or forcing a retreat to the ring ladder 3 of the campaign.
The patrol phase was more balanced that in the previous game, with the British controlling the two houses to the left of the table and the orchard in the north; and the Germans the centre-upper right area  of the table (see illustration). 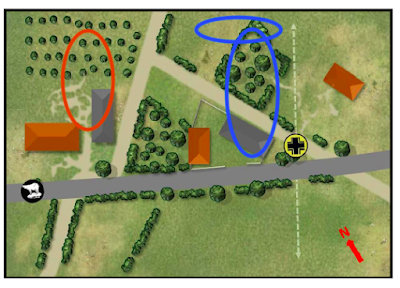 Once again the British pre-game artillery support rule prevented the German deployment; despite the mist rule affecting the British deployment, a section was early released on the table and with a quick (and daring) dash, it captured one of the German jumpoff points before they could react. A chain of Command dice was used to conclude the turn, the lose representing a -2 points hot on the German Force Morale.
Before the British could retreat to their starting line, the German could deployed a Pz IV, dodge a PIAT grenade, killed the PIAT team and made two additional KIAs on the British section.
A first German infantry section came in support of the tank, but before shooting a single bullet, the British retreated and hide behind the orchard on the left of the table. The British FO arrived in that moment and placed an accurate mortar barrage on the PZ IV, narrowly missing the enemy infantry hiding behind the hedge on the upper part of the map.

The German were at that point in a difficult and precarious position: the two remaining jumpoff points were invalidated, located under the fire area of the mortar barrier, so no additional troops were expected to arrive to the table (neither I did have a CoC dice to end the turn); the PZ IV was slowly pulling back to leave the area affected by the same barrier; the German infantry section was in danger of being caught by the mortar barrier at any moment if in sight of the FO or another British unit, as soon as they would left their hiding place.
In the meantime, British units were manoeuvring to get the most advantageous position to attack the Germans once the barrier was lifter. So having no casualties, good morale and being still in reach (12”) of my jumpoff points, I decided to retreat.

Well played by the British the score is 2-nil. Next encounter is in the main German defensive line, hopefully a tougher nut to crack for the British.
Publicado por Anibal Invictus en 13:21