Training the New Recruit in Through the Mud & the Blood (II) 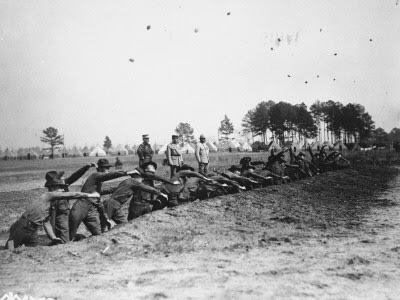 On Sunday we continued training Alfredo, our new apprentice, in the dark arts of Through the Mud & the Blood, the platoon-sized WWI wargaming rules of the TooFatLardies factory. I choose the second training scenario of the companion booklet Stout Hearts, after the successful training game that we played 3 weeks ago.

This second scenario is a classical assault on a two-line trench position defended by the Germans (1 HMG and 2 rifle sections). The British player commands a full infantry platoon (rifle, Lewis gun, bombers and rifle grenadier sections respectively) with a moppers-up section following the main force; the objective is to secure the position, consolidating the flanks to avoid surprise German attacks, and to dislodge the HMG entrenched in a bunker.


The game started with a 2-turn artillery barrage that unfortunately for the British did not cause much harm to the German defenders: a mere one causualty, a few shocks and one rifle section scared enough to look for cover in its dugouts. The British player decided to launch a concentrated attack in its left flank, to avoid the field of fire of the German HMG (we allow for a restricted 45º front fire arc in bunkers).

The quick advance in blinds took the first British sections into automatic spotting range of the Germans blinds in just a couple of  snifters (turns), developing into an intense exchange of fire...

...in which the British (as ususal) suffered the most being caught in the open at short range by the German fusilade...

... and the rifles section being totally wiped out by the fourth turn of game. However, the sacrifice was not in vain, as this heroic action allowed the rest of forces to reach the trench line in short time.

The German commander decided then to pull back the rifle section to the second line and to deploy the HMG out of the bunker into the trench parapet, aiming to make an enfilade fire on the British. The British player was really lucky as the HMG was not activated for several turns in a row, allowing them to advance into charge with light casualties ... although not always at the desired speed...

The British bombers section finally closed on the first German rifle unit with the expected result (unit disbanded) as it was under the command of the platoon leader himself (level IV Big Man adds several dice to the attack from its senior rank as well as from the "fervour"-initiative cards- put in the attack).

Drunk with glory, they decided to repeat the feat (some guys there looking for medals) and charged again (despite 4 shocks accumulated in the first attack) into the remaining German rifle section (which coincidentally happened to be under the leadership of the German Lt -senior Big Man commander-).The British run out of luck soon, were defeated by a difference of three casualties, thus breaking and running like hares to take cover into the next shell crater.

Then it was time for the British moppers-up to act...

...not failing to his reputation and well known killing instincts, resulting in the second German section being put out of action with 4 casualties and 10 shocks accumulated.

At this time, the balance of forces was of 1 HMG section for the Germans (a small 5-crewed but deadly unit) already in the parapet and about to make flanking fire at short range on the British: on the British side there were a section of rifle grenadiers, well far out from the trenches in the flat lands (and with the grenades allocation exahusted by then), the moppers section still recovering from the last combat (too many shocks accumulated) and the Lewis gun section in good order but with only half of its allotment of men.

As the outcome was uncertain, we decided to play a couple of additional turns... first card coming out was the Lewis gun section...it fired on the HMG...and  I could hardly believe their luck: it achieved 3 kills and 4 shocks... the HMG crew break and flew... leaving the gun behind.... and of the game decreed.

A British victory again in the very last moment, like in the previous game.

Lessons learned
As I said at the beginning, these training scenarios from Stout Hearts are very useful to grab the key game mechaniscs and also to learn the basic historical tactics, as each scenario has also a good analysis of how to undertake the action using contemporary tactics.

I think the British player made a good initial deployment in columns and was right to move fast into the trench line, covering the most exposed terrain until the trench line in short time, although at the cost of a full rifles section.

At the other side of the scale, the rifle grenadiers were deployed probably too late, the Lewis gun was also inefficiently used (although it gave the final victory to the British, albeit in the last and ONLY lucky shot made across the whole game), the bombers were put at an excessive risk and the platoon commader was overexposed.

Having said that, the scenario was fun and the Germans showed to be a tough nut to crack, but both players really enjoyed the game and it was a perfect end for this short Easter break (extending in Madrid from Thrusday to Sunday).