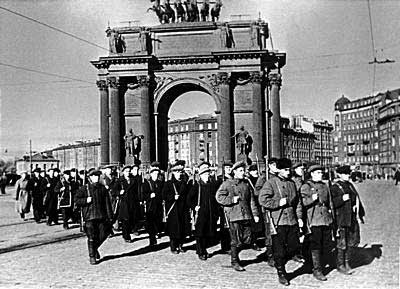 What best way of investing a bank holiday afternoon than wargaming?  And this is what we did on Friday September 9th (a local holiday in Madrid); a few email exchanges during the week and presto, we met again to play the third leg of our club's summer Stalingrad campaign. If you want to follow the complete narrative, click the links for Part I and Part II.

The Red Army commanders' moral  improved somewhat thanks to the arrival of a new chief of operations (shhh...please do not disturb...) 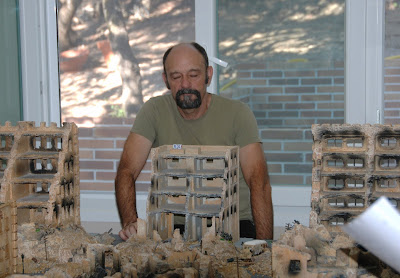 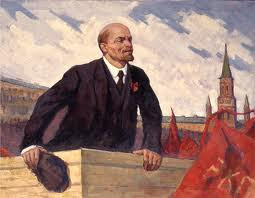 ... and our wonder-secret-weapon: a set of new dice specially designed for the Red Army (we really needed a change after the disaster throws of the previous game!!... thnaks to José Carlos, one of the Red Army commanders and host to the game) 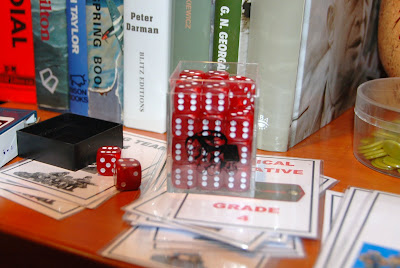 In my last report I finished the blog stating that we were about to start the night phase of the game today. Apologies, as apparantely I was totally wrong and there were three daylight turns left to play. In fact  last Friday we were able to play 6 turns, three daylight and  three night, which was not bad indeed. As in the previous report, I will comment the events of the day starting on the left flank and moving to the right.
Left flank
No major events here, the Soviet Army forces in the area were wiped out by a powerful engineers platoon reinforced with a flamethrower. The house in dispute was taken and now the Germans are approaching the left corner of the main factory building. No a lot of progress due to the lack of activations
Central area
Readers of previous posts may remember that there were four houses under dispute here. And despite the very bad omens after the second game, the Red Army has been able to more or less stabilise the front.
The game started with the arrival of a Soviet mortars barrage... 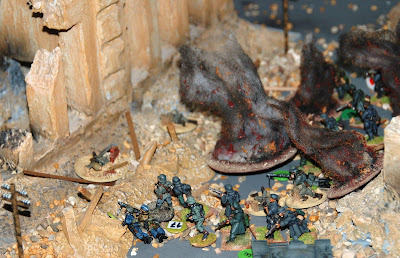 ... that fell exactly in place, causing the first casualties to the Germans force caught crossing a street without any cover. It was followed by the activation of a sniper team... 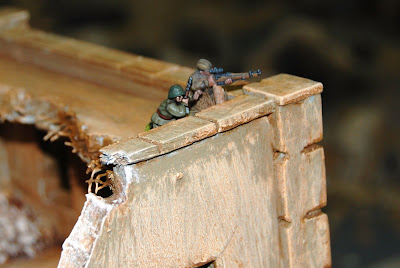 ... that pinned down another squad looking to attack  the Soviet squads entrenched in one of the houses by the rear side; and finally we saw the arrival of Soviet armoured reinforcements... 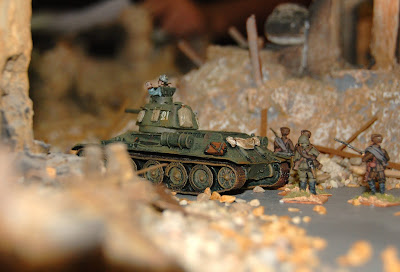 ... and a brave militia unit, raised by the local Stalingrad workers and students soviet, who moved to atack the closest German unit disregarding the bullets while singing The International... 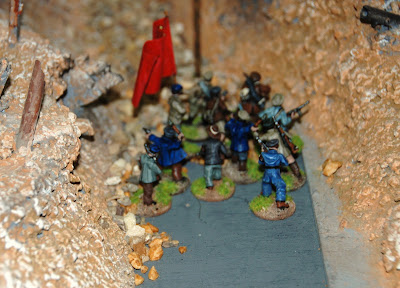 This was enough to stall the momentum of the German advance at least temporarely... (but the first cracks in the German Headquarters were noticeable!!) 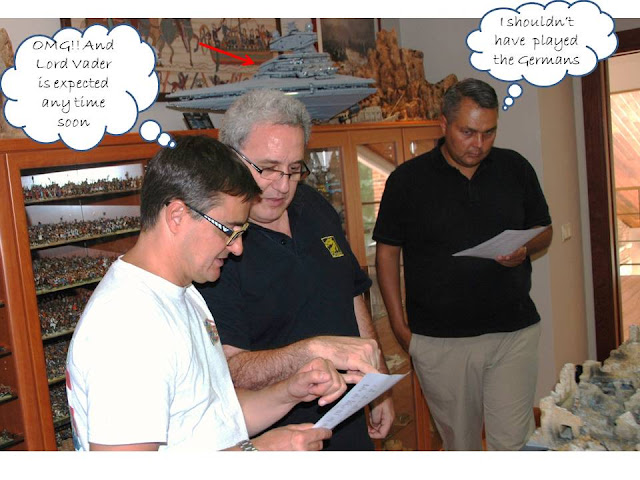 Adding insult to injury, when the Germans resumed their advance, a strong assault on the central building in the line was successfully rejected by the Soviet troops, who were hidden and caught by surprise the most advance elements... 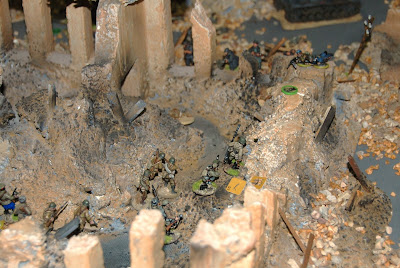 In additon, our "sewer rats" found their way again in the underground maze of tunnels, exiting just next to a German HQ unit whose members were utterly killed... 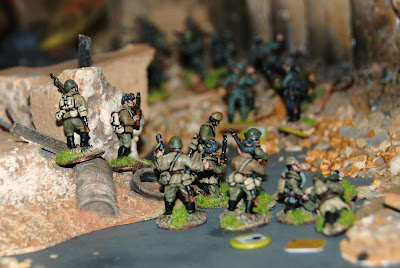 ...and before the Germans could retaliate, they escaped unharmed jumping into the sewer tunnels again.
Right flank
But not everything was going wrong for the Germans. In my previous post I mentioned the gun duel between a German Stug and a Read Army AT gun hidden in the debris of a building. The Germans put one direct shot on the AT before the gun could penetrate the iron armadillo in the previous game, killing one crew member... 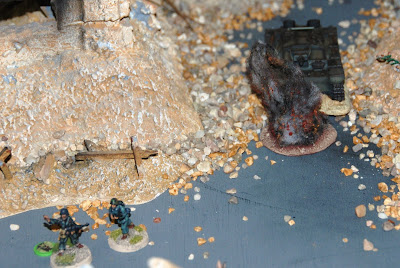 ...and in this game, the heoric Soviet gun crew keep on targeting the Stug, but to no avail: two direct hits blowed into pieces the reamining of the AT crew... 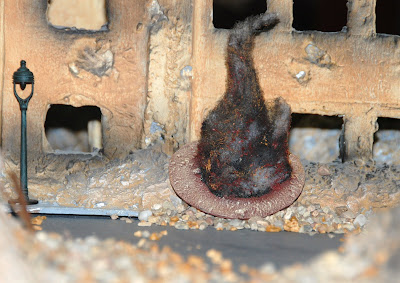 A T-34 rushing to renforce the AT gun arrived too late but engaged in a new fire duel with the Stug. Dice rolls were again in favour of the lucky German tankers, who saved several confirmed hits. In a couple of turn however, a column of black smoke was seen coming form the engine bay of the Soviet AFV, confirming that if not dead, the crew was at least  occupied in putting down the flames, rendenring the tank as non-operative for the rest of the game. 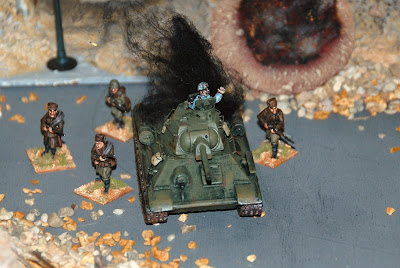 In addition, a ramdom event card brought a new reinforcement the Germans, of a much better quality (and with netter weaponry) than our militia unit.
End of daylight turns
After the third tea-break card , the umpire declared the end of the daylight operations. The night segment extending through three additional turns (tea break cards) was to begin now. The operations were to be conducted in a complete different way in those night turns:
The Soviet players assessment of the situation at that moment was more optimistic than at the end of the previous game in August. Four buildings were in play and three of them were at the risk of being taken by the Germans. Now there was only one occupied (in the left side of our line) but the rest of the line was holding.

Our orders were therefore to continue defending the buildings and the flares were marked in areas of high concentration of German troops, with the aim of shooting them with any means available at hand. The three turns were quickly played, as not only us but also the Germans gave a limited number of orders yo their troops (the photo below show the second turn with a German and Soviet flare displayed in the central part of the table). 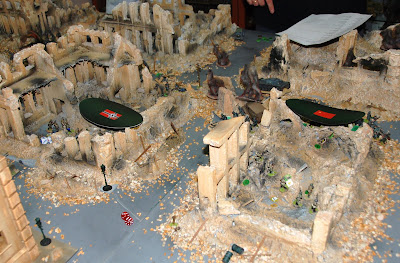 The most relevant action took place in the right side of the line (the fourth house in dispute) . Up to three German squads were ordered to assault the position, but only one reached the house  due to the limited movement capability. 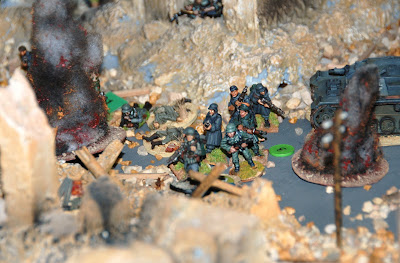 Although the Soviet unit defending the place had taken some casualties, was in good order and put a decent number of close combat dice in play to fight the Germans. Unfortunately not a single "6" was achieved (in 11 combat dice!!), loosing by just one kill of difference but receiving 5 shocks (trebled to 15 because this being the last night turn).
As a result, the unit broke and the Germans oocupied the building. A real shame as it was in the very last minute (just before the last tea break card came out of the deck...) 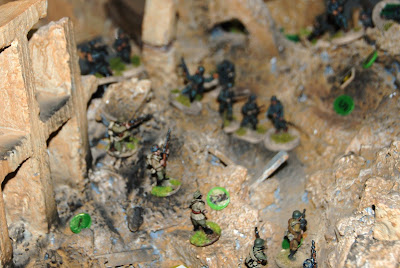 Wrap-up
At the end of the game, the central part of the table has a first building occupied by the Germans; the next is in Russian hands controlled with a rebuild squad (merging remanents of  understrength squads); the next is half controlled by the  Russians; and the fourth and last by the Germans. There is one T-34 and one AT gun vs three Stugs in play too; and finally an infantry unit running through the sewer tunnels ready to surprise any isolated German sqaud through the rear of their line.
The Germans have suffered relatively more in this game than in the previous two, although the loss of a  T-34 and an AT is heavy blow too. A new daylight phase will follow next and the assault on the factory is now granted, as the two German controlled houses make a good springboard to provide momentum to the attack.
No photoshop-treated pics this time, but I hope to get some additional stunning pictures over the next days from my gaming mates.
Publicado por Anibal Invictus en 20:10