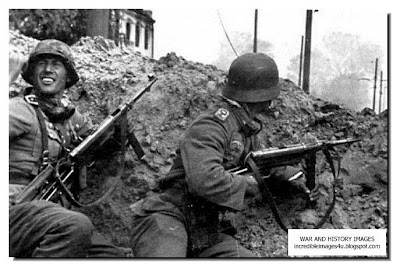 After a lull of a couple of weeks, we met again on Sunday August 290th  to continue our summer Stalingrad campaign. We were able to complete the first 8 daylight turns and stopped just athe beginning of the games's night segment.

You may remember that in the previous post we left the Red Army in not a very confortable situation, with 2 out of the 3 first line ruined buildings that made our advanced defensive line about to be overrun, following a much stronger than anticipated storm of lead.


To facilitate the reading, I will describe yesterday's actions dividing the battle table in three sections (from the point of view of the Soviet player: left , center and right

Left flank
On this side, the German player launched two strong pioneer squads reinforced with a flamethrower team. The guys finished their job in a very professional way, grilling the last remaining Red Army defendants in the area. 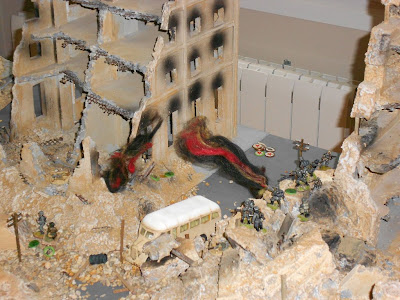 However their progress was slow and did not have enough activations to enter the building and were also slowed by the fire of a MMG on the top of the factory building.Truly the MMG fire was not very effective in terms of kills and shocks, but the Germans had to invest some of their movement dice allotment in taking cover. 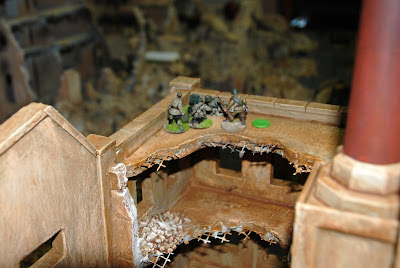 Central front
This is the area that saw more action and Read Army blood spill through the game. There were three ruined buildings defended by the Red Army in play. The one in the extreme left, the remannets of two infantry squads and one MMG coninued suffering attrion from from the German fire (MMGs and 75mm guns from just across the street) and from a new Panzer II... 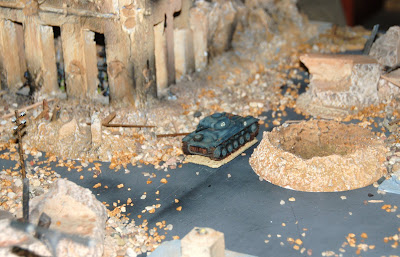 ...that was attachked by surprise from a hidden AT gun located in the main entrance of the factory... 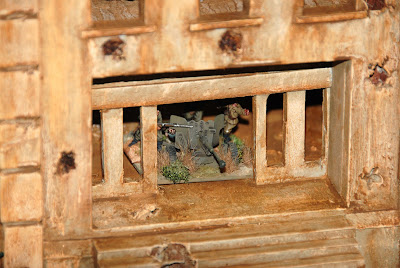 ...brewing up after the second shot 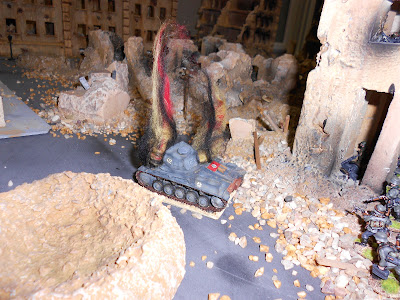 And despite this victory and the arrival of the first artillery barrage support... 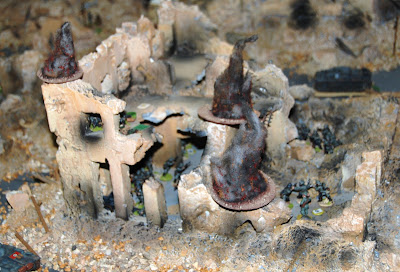 ... the Red Army forces outnumbered and outgunned (as well as setting a new world-record of bad dice results) ... 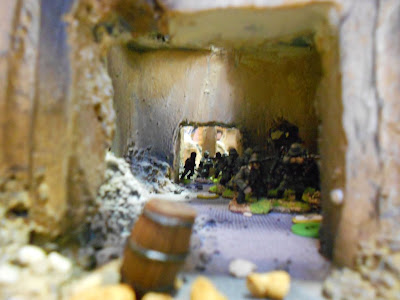 ...relentlessly had to yield terrain to the Germans... 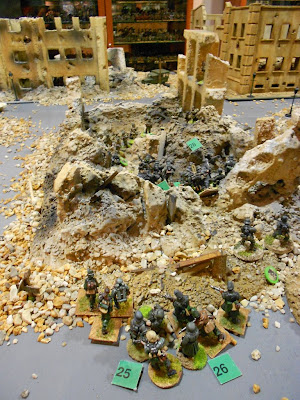 ...who continue launching new assault platoons and squads into the fray... 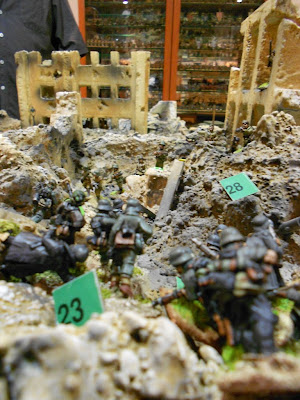 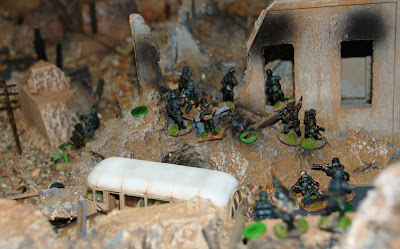 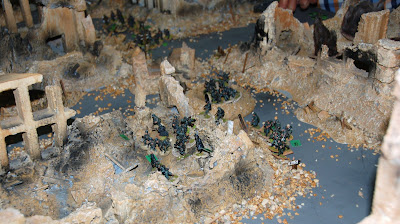 While some stormtrooper detachments wiped out the last pockets of resistance... 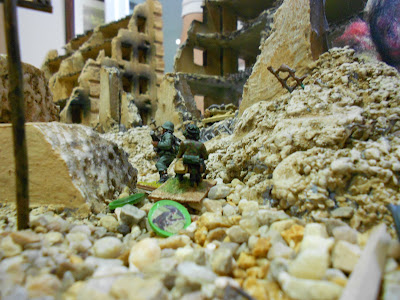 ...the rest of the German troops consolidated the positions in the central row of houses, gaining a good springboard to launch the final assault on the tractor factory, the objective of the game.

Right flank
In the right flank of the Soviet line, a singular duel occured, extending for several turns, between a German Stug SP gun... 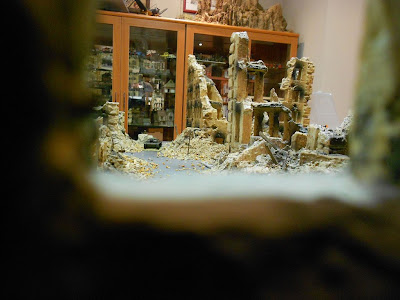 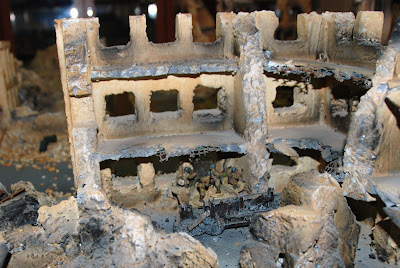 .. and despite the surprise factor and some well directed shots by the gunners... 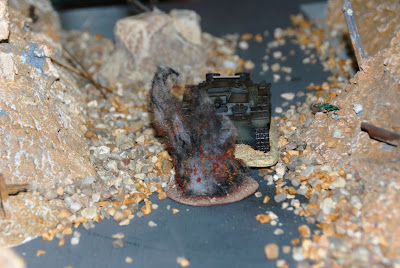 ...they failed miserably to penetrate the armour of the grey iron beast (I should seriously consider buying sa new set of dice) and furthermore, the German tank commander managed to put one direct hit on the AT position, blowing the crew into pieces.

Wrap-up
The situation is not looking good for the Soviet commanders. A significant number of squads has been wiped out or reduced to less than 50% strength in exchange for almost nothing. The dice were not helpful at all and even the German players reckoned that we got a disproportionate number of kill results vs shocks. Even our surprise attack through the sewers to the rear of the German line fell completely, with the Red Army section being discovered and had to return in a hurry to the tunnels... and guess... got lost in the sewer maze.

Not evereything was bad luck. Our forward defense tactics underestimated the fire power that the German could bring into the exposed infantry sections. But even when we tried to changed the defensive system, taking our troops out of the German's line of sight,  entrenching in the middle of the house blocks to force the Germans  a close assault and denying the firepower advantage, the results were all the time critically negative for us.

The night turn will be next, where we shall be able to recover some stragglers and reinforce the garrison entrenched at the  Red Barricade Factory. We agreed to play on Friday afternoon  this week (a local holiday in Madrid).

1/ Look at the wonders of photoshop in this pic 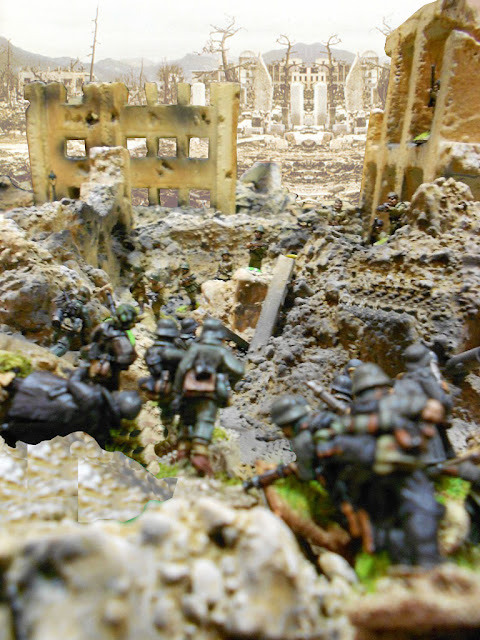 2/ I share with you this amazing webiste  with contemporary photos (some of them totally new to me) and video footage of the Stalingrad battle among others. Strongly recommended.
Publicado por Anibal Invictus en 22:00