First demonstration game of Chain of Command post-release, involving a seasoned playtester, three rookies and myself as umpire. I went for a simple recon probe mission providing the OOB lists to the contenders and therefore not using the list options of the rules.


At the end of the Patrol Phase the Germnas had consolidated a defensive line around the house at the bottom of the picture above, while the Americans distributed their jump-off positions along the bocage line at the end of the road.


The US force held the initiative due to higher morale, and went for a fast units deployment, putting on the table in the first activation phase the AT-gun and two infantry sections. 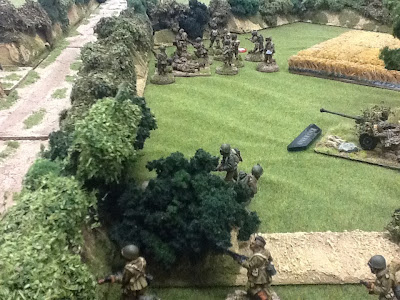 On its side, the Germans showed more restrain  and send its 2 Pz IVs in advance to put under control their right flank (the main road and the field opposite to the house) and deployed an infantry section and the HMG to cover the house on the left flank. 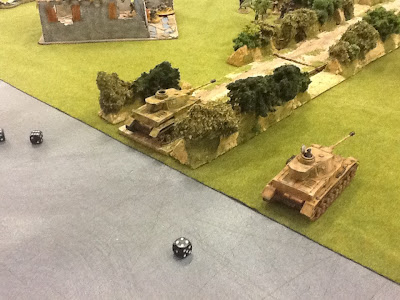 The deployment created a situation of long impasse in the actions of both sides, with the Germans gaining a tactical edge: although the thick bocage lines put both opposing forces out of sight of each other, the Germans (all in overwatch by then) had a better field of fire, so any attempt of the Americans to cross the bocage was likely to end in tears with the Germans enjoying the opportunity to fire first. 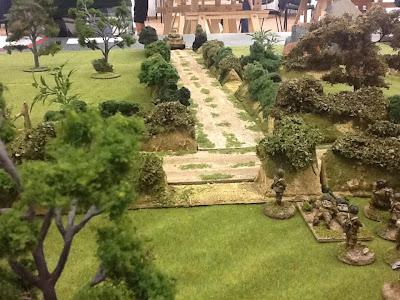 The US forces moved cautiously, looking to cross the bocage always out of German LOS. This  not only limited significantly their move options, but also the potential to move forward except for a few inches.

Just when I thought the game was stalling due to the paralysis of both sides, the Americans decided to make a bold move, launching their Sherman forward and using a Chain of Command dice to end the turn and remove the "overwatch" of the Panzer IV...


...which nonetheless fired first in the following activation, but causing (miraculously!) no damage to the American tank which inmediately replied firing its gun...

... bouncing on the German's tank steel plate! A draw in the first fire exchange!!

But before it could replied, the US players used a second Chain of Command dice to activate the HQ's bazooka team and to ambush the Pz IV...

... inflicting a (very lucky) net four hits (!) on the German AFV with the expected results...

With the road now clear the American infantry moved at the double and reached the outskirts of the house defended by one German section, while another US squad was trying to outflank the defenders moving across country on the German's left. 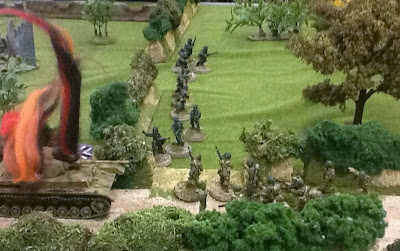 Unfortunately, there was no time for more turns and we have to stop playing just when things were getting really interesting. No way to award a game winner because both the German (except for the destroyed tank) and the US forces were in very good shape, with just a couple of infantry casualties and no shocks.

The general impression about Chain of Command was positive among the new players. A few discussions about the game mechanics were later put in the TFL Yahoo Group forum, but overall I perceived that it took very little effort to the players to take comfort with the rules.

From my position as umpire I think the Americans made a too hasty deployment (specially the AT gun that came on the table even before any Panzer IV emerged). Some interesting options of the national  lists (like the use of scout teams to threaten the German jumpoff points, forcing a deployment of the enemy troops) were not used. The way to break the impasse with the move of the German was REALLY bold and highly risky, but it paid handsome.

The Germans made a good use of the terrain and the forces, sitting confortably with the Panzers and waiting for the Americans to come, mainting most the infantry force in the rearguard. If anything, I think they were a little disrupted by the unexpected loss of the Pz IV and did not react timely to the attack of the US infantry putting more sections on the table.

Note to myself: remember to add some indirect fire (mortars) assets to the OOBs when playing deep bocage... a good way to get those arses hiding behind the hedges moving forward :-)

A final note about the scenery: thanks to my collegue Alex, who  worked hard this summer to have 9 meters of bocage ready by now, together with my new roads I think we have made a substantial  stride forward in terms of gaming table visuals. I hope the photos (although just iPad 2 quality) illustrate these imprevements.